L’Oréal in Talks With Groupe Clarins for Mugler and Azzaro

PARIS — L’Oréal is diving deeper into the designer perfume business, disclosing Tuesday that it’s in exclusive talks to acquire the Mugler fragrance and fashion businesses, and the Azzaro fragrance brand and accessories.

It sets the stage for the world’s biggest beauty company to dabble in fashion once more, while Groupe Clarins will exit the perfume and ready-to-wear markets altogether to focus on skin care.

“The perfume category is at the heart of our global strategy for growth at L’Oréal Luxe,” said Cyril Chapuy, president of that division. “In this context, we would be thrilled to welcome Mugler and Azzaro: These signatures, with a long history in fashion and olfaction, would perfectly complete our portfolio of brands.”

“This is a strategic move, whose goal is to refocus and reinvest to unleash the full potential of Clarins that we believe is unlimited,” said Jonathan Zrihen, chief executive officer of Groupe Clarins, during an exclusive interview with WWD. “Our goal is to be one of the global skin-care leaders.”

Mugler’s portfolio of perfumes includes the blockbuster Angel women’s scent, which pioneered the gourmand olfactive family when it launched in 1992, and Alien, that’s now an even a bigger bestseller. Azzaro — whose fragrance activity joined Groupe Clarins in 1995 — boasts classics such as Azzaro Pour Homme and Chrome, and Wanted and Wanted Girl, targeting younger consumers. 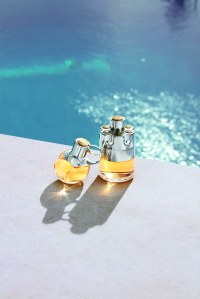 Industry sources estimate the Mugler and Azzaro brands together ring up wholesale revenues of about 360 million euros annually.

A deal for the two businesses, valued by industry sources at upward of 1 billion euros, is expected to be completed during this year.

The Azzaro fashion business is run separately, by Reig Capital Group, and is not part of the discussions.

L’Oréal executives would not comment further on the ongoing talks, according to a group spokeswoman.

The beauty giant has been building up its luxury fragrance portfolio, most recently with the acquisition of Valentino’s perfume license, effective Jan. 1. The company is believed to be next in line to snap up the Prada fragrance and beauty license, currently held by Puig.

The L’Oréal Luxe division, which includes fragrance licenses for Yves Saint Laurent, Giorgio Armani and Maison Margiela, has been a long-standing engine of the group’s strong sales, which in the first quarter of this year rose 11.4 percent to 7.55 billion euros. Sales at L’Oréal Luxe in the period advanced 19 percent, making it the fastest-growing branch of the company.

“Nearly 9 percent of L’Oréal’s global beauty sales are generated by fragrances, and despite the intensifying competition from niche [perfumes], L’Oréal managed to grow its share in premium fragrances in 2018 to 13.4 percent in retail value sales, driven by the success of Giorgio Armani and Yves Saint Laurent,” said Kseniia Galenytska, a beauty and fashion analyst at Euromonitor International.

“L’Oréal was overtaken by Coty in 2016 as the largest global premium fragrance player, with Coty benefiting from the addition of luxury houses, such as Hugo Boss and Gucci, acquired from P&G,” she continued. “L’Oréal is looking to revive its position as the world leader in premium fragrances, and the acquisition of Mugler and Azzaro, as well as Valentino…and the renewal of the Giorgio Armani license until 2050 would help L’Oréal achieve this ultimate goal.”

However, Javier Escalante, equity research analyst at Evercore ISI, pointed out the U.S. and European fragrance markets today are being fueled by the artisanal segment, “making L’Oréal’s prior acquisition of Atelier Cologne more strategic.”

“Mugler and Azzaro, as fashion brands, are yet to resonate in Asia, where consumers are in the early stages of adoption of fine fragrances as a category,” he added. “Therefore, whatever financial payoff L’Oréal is seeking [from] this potential transaction strikes as negligible in the near term.”

L’Oréal’s shares closed up 1.9 percent to 254 euros on Tuesday in a market that rose 0.2 percent.

If the transaction with Clarins goes through, L’Oréal will dip back into fashion after almost two decades out of the game. It had for many years in its portfolio Lanvin fashion and fragrance, which it sold in 2001 to a group of investors led by Shaw-Lan Wang. When the French beauty giant revealed the sale, the company said it was “to continue refocusing on its core business.”

Historically, it has been very difficult for a beauty concern to successfully run fashion businesses, a totally different activity that they sometimes maintain primarily to keep tight reins on the brand image.

Groupe Clarins has hit many hurdles with Mugler. In 2003, the company said it was shuttering the doors of the Mugler women’s fashion house it had been running for years and outsourced its men’s wear business. Various licenses of Mugler products, from eyewear to handbags, continued, meanwhile.

Clarins said at the time it was closing the money-losing fashion house to concentrate on Mugler fragrances. Then, in 2008, the Mugler women’s fashion brand was resuscitated, with a capsule rtw line, dubbed Thierry Mugler Edition, due to growing demand and a tangible Mugler revival among designers.

Mugler fashion has been through a number of designers since. Casey Cadwallader is the fourth person to assume that position over the past 11 years. He followed Rosemary Rodriguez, Nicola Formichetti and David Koma.

Inter Parfums is another fragrance house that owns a fashion brand, Rochas, alongside the brand’s perfume activity.

Skin care is Clarins’ core category, which in 2018 generated 64 percent of the company’s overall sales that reached an estimated 1.73 billion euros. Its skin-care business was bolstered largely by the rise of Chinese Millennials; the simultaneous launches of two well-received franchises — Double Serum and the Extra Firming range, and online sales.

Skin care was the fastest-growing segment for the company, with an 18 percent uptick, versus a 4 percent gain for makeup and a 4 percent decline for fragrance.

Skin care was also the fastest-growing category worldwide in 2018, registering a gain of 7.5 percent, versus the 5.5 percent rise posted by both fragrance and color cosmetics, according to Euromonitor International.

Groupe Clarins’ Zrihen told WWD that by focusing on its core brand and historic business, Clarins’ presence abroad could be expanded, especially in China, which has become the group’s first market. There would be an emphasis on protecting the brand’s leadership in Europe, and on successfully completing Clarins’ omnichannel transformation and its digital transformation.

The group plans to invest in makeup, while making Clarins into an umbrella brand for a complete well-being philosophy.

“We are very proud of the [fragrance] brands we have built,” continued Zrihen. Groupe Clarins built the Mugler scent business from scratch, and Azzaro from a small fragrance brand.

“We are super proud of our teams. We reinvented the fountain [refill] concept, developed CRM to a very strong extent with Mugler. We created beautiful juices,” he said.

However, the fragrance industry has changed dramatically over the years, with the number of perfumes launched yearly growing exponentially. There’s been a concentration of big players and the market is expensive.

“These fragrance brands that we have nurtured, cherished and developed, we care tremendously about them,” said Zrihen. “After 25, 30 years, we found it was [increasingly] difficult for us to guarantee the full potential of their development.”

Finding a company with a high level of investment capability to accelerate the brands was key, as was its willingness to honor the brands’ DNA and welcome their teams from France. If a deal does go through, it would involve L’Oréal purchasing Groupe Clarins’ fragrance factory in Strasbourg, France; the Clarins Fragrance Group holding, including the management, marketing and sales teams in Paris; the Mugler fashion house, and the Azzaro accessories business.

“It is my responsibility and [that] of the owner, as they want to build the future of Clarins, to remain a family company with their daughters, to have a strategic refocus on our core activity, which is beauty, and our core [brand], which is Clarins,” said Zrihen.

Clarins aims to be the most trusted skin-care company, closest to its consumers.

MyClarins, a skin-care line targeting Millennials, was introduced globally in late March. The idea was to create very simple product recipes that keep “the goodies in and the nasties out.” The formulas are about 88 percent natural and vegan.

Aromatherapy is a category on which Groupe Clarins is hard at work, too. Zrihen handed the project to Virginie Courtin-Clarins, who had formerly run Mugler, since the use of aromatic plants is part of the heritage of the Clarins brand.

The executive is developing a full range around aromatherapy. She also has been charged with creating collaborations and partnerships with other brands and retailers.

Groupe Clarins in the past had a larger portfolio of fragrances, licensed from fashion houses, including Zadig & Voltaire and Stella Cadente, that it gradually whittled down.