The group’s business was fueled by Asia and its luxury and active cosmetics activities.

The world’s largest beauty company said on Tuesday evening after the close of the Paris bourse that its sales in the three months ended Sept. 30 came to 7.18 billion euros, up 11 percent in reported terms and 7.8 percent on a like-for-like basis.

Eva Quiroga, an analyst at Deutsche Bank, called L’Oréal’s third-quarter sales “the best number in more than a decade. Pleasingly, like-for-like growth — albeit still skewed toward Asia and L’Oréal Luxe — was more broad-based than it has been for some time, as Western Europe and Professional Products showed clear signs of recovery.”

Sales momentum at the maker of Lancôme, Garnier and Maybelline products picked pace up in July-to-September period, after the group posted growth of 6.8 percent in the second quarter and 7.7 percent in the first quarter of 2019.

“What is very positive is that this acceleration of the organic growth versus previous quarters is coming from an improvement of the rest of the world, excluding Asia,” wrote Pierre Tegnér, an analyst with ODDO BHF, in a note, referring to L’Oréal’s number-one market.

On a like-for-like basis, sales in the third quarter rose 16.7 percent in the New Markets and 3.2 percent in Western Europe, while they declined 1.3 percent in North America.

Fielding questions during a call with financial analysts on Tuesday evening, L’Oréal chairman and chief executive officer Jean-Paul Agon said of North America: “This is not a great year, but we know what to do, how to do it — and we will do it.”

Within the past four months, new chiefs have been named for L’Oréal USA, plus the country’s Luxe and Consumer divisions.

“It’s true that part of the solution when you are facing difficulty like this is to have a new, fresh team. It’s not a question of talent,” continued the executive.

As for China, Agon said the group hasn’t noted a slowdown there, although that’s not been true for Hong Kong, where months of demonstrations have negatively impacted business.

“As it has been said for other luxury players, we think that we have recuperated a lot of these lost sales in other Chinese regions,” Agon said. 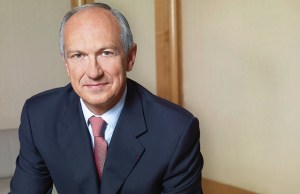 The group’s divisions remained contrasted in the third quarter.

“Growth in Luxe was fantastic [13.8 percent], well ahead of expectations, as was Active Cosmetics [14.2 percent], while growth in Consumer [2.7 percent] remained subdued and below expectations,” wrote Andrew Wood, an analyst at Sanford C. Bernstein & Co. LLC, in a note.

Also on a like-for-like basis, the Professional Products Division registered a 3.9 percent gain.

Alongside business in Asia and from the Luxe and Active Cosmetics Divisions, other key growth drivers for L’Oréal in the third quarter included skin care, e-commerce and travel retail.

The group’s skin-care sales rose 18 percent, versus the 8 percent rise of the category’s sales overall.

L’Oréal’s e-commerce sales advanced 47.5 percent on a like-for-like basis. “The great thing with e-commerce is that it is a very broad-based growth,” said Agon, adding all L’Oréal teams now understand e-commerce “is not the icing on the cake, but it’s the cake.”

Agon said the beauty market worldwide in the third quarter grew at an estimated 5.5 percent, on par with the rate of the first two quarters of this year and also the second half of 2018.

“There is no change in the dynamics of this market — by regions, by channels, by categories,” Agon said.

In the first nine months of this year, L’Oréal sales advanced 10.7 percent in reported terms and 7.5 percent on a like-for-like basis to 21.99 billion euros.

L’Oréal executives said they expect the group to close 2019 with another year of sales and profit growth.