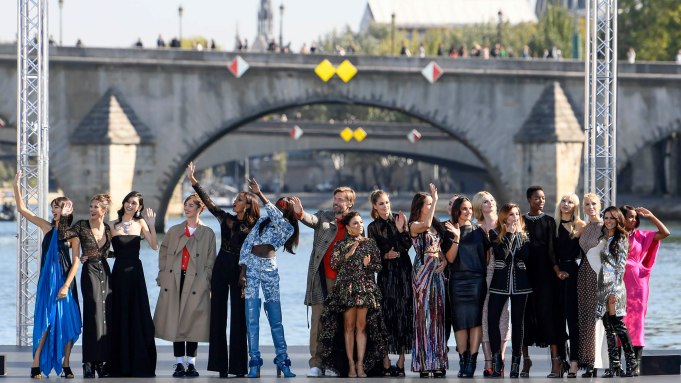 PARIS — Traffic on the river Seine came to a halt on Sunday at 2 p.m., as people thronging its banks in front of the Musée d’Orsay and Tuileries gardens, and on a footbridge, gazed at a floating, 195-foot-long catwalk.

It was about to spring to life with the L’Oréal Paris fashion-beauty show — dubbed Le Défilé L’Oréal Paris — billed as a celebration of beauty, fashion and diversity. Posters for it had sprung up around town.

Just before the event — which drew guests from 33 countries — Eva Longoria appeared on a big screen to psyche up the audience. Two drones whirred overhead, and music pumped out of giant speakers as a barge parked parallel to the runway. Jean-Paul Agon, L’Oréal chairman and chief executive officer, was seated front and center, among other group executives and attendees.

The event, the brand’s second such display after the show on the Champs-Élysées last year, was expected to be viewed by 200,000 people live. It was live-streamed to 30 countries, while L’Oréal’s digital platforms and social networks ran related content.

Diversity and empowerment were the buzzwords of the day.

“I’m just thankful that I am here to represent women of my age, and to show them there is no age limit on beauty — that it’s a lifetime experience, and that we are included,” Andie MacDowell, a 60-year-old L’Oréal Paris ambassador, told WWD backstage before the show.

She’d modeled in the French capital before. “The very first show I walked was in Paris 40 yeas ago,” she reminisced. “It was Saint Laurent. And I did photographs with Helmut Newton for them, as well.

“I used to go to the house and show up in a T-shirt and jeans. And they would go: ‘Oh, Andie, please just red lipstick. And they would sweep me in and do my hair and makeup, just for the fitting, which I thought was amazing,” she said.

The actress has been busy. “I did a TV show for the BBC, called ‘Cuckoo’ that’s going to be on next summer. It’s really funny. They gave me a great character to play,” MacDowell said. “It’s unlike anything you’ve seen me do. It’s a very broad character. It was so much fun. The writing was amazing.”

She also has a movie coming out on Netflix, called “The Last Laugh,” which also stars Richard Dreyfuss and Chevy Chase. “And I did a beautiful movie called ‘Love After Love,’ that’s on Hulu,” MacDowell said. “I think it’s important to show women of my age in a modern perspective.”

Elle Fanning, who made her catwalk debut at Miu Miu earlier this year, was excited before the L’Oréal Paris event.

“The set they have created — we’re literally walking on water,” she said. “I am nervous, [because] my shoes are very high.”

Fanning just wrapped filming “Maleficent 2,” due out in 2020, which has her reprising the role of Aurora. “The first one I did when I was 14. Now, I’m 20. I’ve grown up a ton. That particular princess I always related to when I was young, probably because the dress was pink and she was blonde, something like that,” she reminisced. “Now, we’ve created this beautiful young woman. She’s grown up.”

Regarding beauty, Fanning said she prefers a natural look on an everyday basis, and taking care of her skin is the first priority. But she loves experimenting with makeup, too.

“It washes off, so why not just go for it with colors and experiment?” Fanning reasoned. “I’ll put makeup on at my house just for fun and experiment and then not go anywhere.”

L’Oréal Paris’ “Because I’m Worth It” tag line resonates particularly with the young actress. “L’Oréal is…not just about makeup products or hair products. That’s what they do, but the bigger picture here is all about taking care of you, which is the most important. Take time in your day to pamper yourself and say ‘I love you’ in the mirror. That’s OK to do,” she said. “You have to love yourself before you can love anyone else.”

Liya Kebede thinks finding a formula to nourish self-worth is complex. “I think that it helps to look outward. The more you [do], the more grounded you feel, in a way,” she said.

Kebede believes that paradoxically, while today’s culture is all about the self, people can find themselves even more insecure than before.

She’s been walking shows but also intermittently visiting the Paris showroom of her artisanal clothing line, Lemlem. “We’re expanding a lot,” she said. “So it’s exciting.”

Kebede is a fan of the L’Oréal Paris show. “The girls are all ages, all shapes, all colors,” she said. “It’s very inclusive, and I think that’s really wonderful.”

Still, it was stressful in the run-up to the display. “It’s open to the public, it’s huge,” she said. “It’s a whole other experience, not like walking in a regular show.”

Duckie Thot, a recent addition to the brand’s roster, was excited to be wearing “Off-White by Mr. Virgil” on the catwalk, but said it was important to take time out of her busy schedule to re-center now and again.

“I work a lot, but just giving time to me, giving myself time and space to breathe when I can or need to. It’s all about feeding your soul and telling yourself that you are worth whatever it is,” she said.

For Soo Joo Park, positivity is essential to self-worth. “Exercising your mental health is the most important, because if you don’t have a good head on your shoulders, you can’t really figure out your worth,” she said. “I try to meditate, and I try to have as much positive energy as I can, and I try to look at the sunny side of life.”

Maria Borges is out to deliver a positive message to women built on her own success. “My tip would be, be confident and always make sure to open doors for other women, because as we work together we also grow together,” she said. “Every day, I remind myself that I’m here for a reason — having such a big platform as a showcase for beauty, not only black beauty but universal beauty. I feel like if I wear L’Oréal products, any other girl can, as well. ”

Her next project involves returning to Angola to mentor women who want to follow in her footsteps. “I’m going to counsel them to shine with me and help them on anything I can…so they can work and help their families and themselves,” Borges said.

The show wasn’t solely about female empowerment. Diversity was also on the agenda with the appearance of “Game of Thrones” actor Nikolaj Coster-Waldau — global spokesperson for L’Oréal Men Expert — alongside three male models, to a round of applause from guests.

Lancien mentally linked designers with different parts of Paris to create hairstyles for the show. Elie Saab, for instance, was given a well-coifed, Avenue Montaigne look. “We did beautiful hair…very chic,” he said.

Jacquemus was equated with a more rebellious Ménilmontant vibe, and Atlein with Pigalle’s nightlife. “I think there are many, many Parisiennes,” Lancien said.

Garland created a makeup look per designer. “The first section is Isabel Marant,” she said. “I would say she is cool-girl chic. The red lip rules — basically it’s last night’s kiss stain. It’s all about a transparent blush on the cheekbones.

“I love Sonia Rykiel, Twiggy goes techno. It’s dolly on the lash, so it’s all about spiky lashes,” she continued. “It’s lots of color. Ami, that’s all about the Cara brow. At Balmain, we’re going to be doing really strong liner, and at Atlein, we’re doing a double-deck liner, so it’s a two-color liner.

“It’s all about empowering women walking down the catwalk,” Garland said.