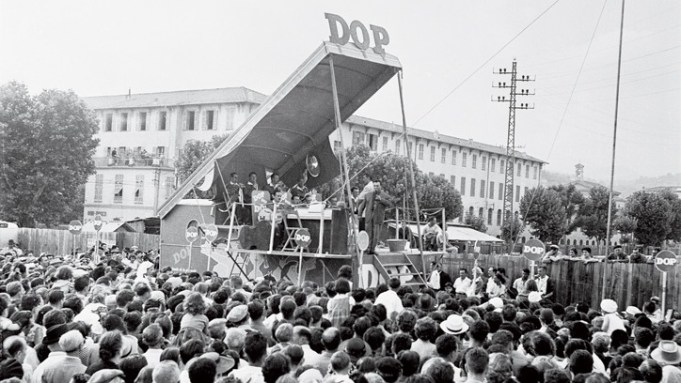 The foundations of what would become L’Oréal — the world’s largest beauty company—were built in a modest Parisian apartment at the turn of the last century. Eugène Schueller, a trained chemist born into a family of artisans, became interested in the complexities of hair dye.

At that time, such rudimentary products had to stay on heads for three hours and — due to the silver salts they contained — could easily turn hair green. Schueller’s goal was to develop effective, nontoxic colorants that would also protect, nourish and bolster hair’s health. Rather than using traditional recipes and prescriptions for that, he took a scientific approach to hair.

In 1909, Schueller set up a firm called La Société Française des Teintures Inoffensives pour Cheveux (or The Safe Hair Dye Company of France) with the equivalent of $165 at current exchange. His kitchen served as a laboratory and the dining room, a demonstration area.

The firm’s leading principles — science and innovation in the interest of individual beauty needs — were established from the outset, as was the philosophy of serving the industry. Schueller, for instance, considered his company as the “ultimate university of hair dyes,” a training center for professionals.

“I did it all: formulas, sales and delivery,” writes Schueller in a diary. “Sales were the worst part. I was shy and had to force myself. I endured many a flat denial.”

He became friendly with some 50 hairstylists, and 10 representatives delivered products on
tricycles. In 1910, the company opened a warehouse in Turin, Italy, starting its international push. By 1930, the firm was selling products in 18 countries (and today, it’s in more than 130 countries).

The colorants the company produced in the Twenties and Thirties included L’Oréal d’Or and L’Oréal Blanc.

Imédia, from 1929, was the first fast-acting coloration process and considered revolutionary.

“The launch of Imédia tint marks the first time the [company] adapted to the fashion preferred by women of the day,” says Jacques Marseille, a historian who penned the book L’Oréal, 1909–2009, which will be published in September by Editions Perrin. “L’Oréal set itself apart as a brand that adapted itself to modern women.”

“The 1928 purchase of Monsavon marked [the company’s] entry into the mass market,” says Marseille of the soap brand.

“The launch of Ambre Solaire tanning products in 1935 shows how the company was adapting to an evolving world, since paid vacations were introduced in France in 1936,” says Marseille. “It was launched because the founder had a house in Brittany. He complained about being sunburned and asked the labs to create something [for it].”

In 1939, La Société Française des Teintures Inoffensives pour Cheveux’s name was changed to L’Oréal — a mélange of the Noir et Or and L’Auréale dye formula  names.

Schueller was a visionary when it came to advertising. He signed on Robert Guérin, considered to be among the first ad executives, and took a no-nonsense approach to his products’ messages. Tag lines such as “You are too old” and “Would your husband still marry you?” accompanied some hair dye ads. Strikingly beautiful, graphic ad visuals were conceived by artists such as Raoul Vion.

Schueller made street marketing a priority. To celebrate the launch of Ambre Solaire, for instance, events were held in cities and on beaches. For O’Cap hair care, men dressed in late–18th century garb gave samples out in Parisian cafes. And the “Clean Children Crusade,” organized for the launch of DOP’s single-dose shampoo packets in 1954, was meant to spark a hygiene revolution France-wide. This included trucks delivering product samples to children in schools and information about good hygiene practices being left on blackboards. The tag line on DOP posters from 1956 read: “Wash your hair as a family once a week.”

“There are very few companies that have chiefs that stay and direct a company for that long,” confirms Marseille. “It creates the personnel’s attachment to a company culture.”

Upon Schueller’s death in 1957, Dalle became president and ceo of L’Oréal, which was still best known domestically. He had risen through the ranks after starting at Monsavon. Like his predecessor, Dalle was an advocate of the power of advertising and “the constant betterment, the amelioration of the quality in existing products,” he told WWD in a May 1984 interview.

During his tenure leading the company, L’Oréal’s product mix widened and expanded past France’s borders and beauty parlors. Among his early breakthroughs was Elnett hair spray from the Fifties. It has been a cult product for more than 50 years.

L’Oréal’s acquisition of Lancôme in 1964 was a portentous step. “It marked L’Oréal’s entry into the luxury market,” explains Marseille. That same year, Dalle introduced the professional hair care brand L’Oréal Recherche, which, in 1967, was renamed Kérastase, and began being sold in salons.

The Seventies brought the advent of L’Oréal’s now internationally famous “Because I’m Worth It” ad slogan. Developed in the U.S., the catchphrase first appeared in ads for Preference hair dye in 1973. It was billed as “the most expensive hair color in the world,” since it was a dollar dearer than its competitors.

Under Dalle, L’Oréal also acquired Garnier, and inked beauty licensing agreements with designers and brands, including Guy Laroche and Cacharel.

Such new holdings and those started from scratch benefi ted from L’Oréal’s greatly expanded laboratories. At the time, Zviak headed up research and development, and he and Dalle introduced an applied research arm. Biology labs  were open in 1963, and in 1979, the company opened the International Center for Dermatological Research in Sophia Antipolis, France.

Among the highlights of the R&D teams’ breakthroughs was the creation of reconstructed skin, which allowed L’Oréal to stop testing finished products on animals. This finding came under Owen-Jones and François Grollier, who heads up R&D until July 1.

In 1988, the first year under Owen-Jones’ tutelage, L’Oréal added Helena Rubinstein and Giorgio Armani to its portfolio. The next year, La Roche-Posay was acquired. (That brand as well as Vichy, SkinCeuticals and Sanofl ore are a  part of the company’s Active Cosmetics Division.)

The late Eighties and Nineties marked the internationalization of L’Oréal. According to Marseille, Owen-Jones’ tenure hinged on contrasting, yet complimentary, goals, which were a desire to grow globally and to maintain a corporate structure encouraging loyalty.

“He is not French, but ran a French company,” describes Marseille. “He headed an industrial business but had a degree in literature. He describes himself as  a poet and a farmer. The success of L’Oréal is based on the fact that its people are grounded and know the world around them. It’s not an obsession with finance. It’s a human company.”

Owen-Jones, who ran L’Oréal’s U.S. business from 1981 to 1984, had developed “a sensitivity” for the potential of American brands. In 1994, L’Oréal announced plans to acquire four foreign licensees, including Cosmair Inc.

“L’Oréal’s been overcoming cultural leaps for as long as I can remember,” Owen-Jones told WWD after the announcement. “When I joined the company [in 1969], the question was, ‘Could L’Oréal become a European force?’ Then, when I went to America [in 1981], the question was, ‘Could L’Oréal exist within the highly competitive environment of the U.S.?’ We were doing a little more than $150 million at that time, and there were some very serious questions raised as to whether we could survive,” he said of Cosmair, which chalked up sales of $1.3 billion in 1993.

L’Oréal also initiated an innovative take on recruitment in the Nineties by introducing business games to unearth promising talent, such as L’Oréal Brandstorm, E-Strat Challenge and Ingenius.

L’Oréal’s philanthropic activities, which began in earnest in the late Eighties, turned it up a notch in 1998, when it teamed with UNESCO to create the For Women in Science program, which supports women in the field of life sciences, for example.

With the turn of the century came a flurry of acquisition activity on both sides of the Atlantic, with L’Oréal, LVMH Moët Hennessy Louis Vuitton, PPR and  the Estée Lauder Cos. Inc. among those snapping up beauty brands. In 2000, L’Oréal purchased salon player Matrix, cult Manhattan brand Kiehl’s and a partial stake in Japan’s Shu Uemura.

Also around the time, L’Oréal developed brands from scratch, including Laboratoires Innéov for beauty supplements, which it created with Nestlé.

L’Oréal’s Institute for Ethnic Hair and Skin Research in Chicago opened in 2003 to further the study of products suitable for its international consumer base.

Among the conditions was they would maintain their holdings in the company until April 29, 2009. Up to that date, Nestlé could not take a majority stake in L’Oréal unless Liliane Bettencourt, Schueller’s daughter, gave her permission or passed away. Since April 29, there has been no change to L’Oréal’s shareholding structure, although industry watchers speculate that could happen in the mid- to long-term.

L’Oréal got acquisitive again in 2006, when it snapped up The Body Shop. The plucky British natural beauty brand’s buy was perhaps one of the most controversial in L’Oréal’s history, since The Body Shop’s founder, Anita Roddick, had long demonized corporate beauty behemoths like the French firm.

Under Agon’s lead, which began in 2006, L’Oréal made a plethora of smaller acquisitions, too, including Sanoflore, Beauty Alliance, PureOlogy, Maly’s West, Canan and Columbia Beauty Supply. The biggest deal inked in his tenure so far has been the purchase of YSL Beauté in 2008. The buy, which weighed in at 1.15 billion euros, or $1.8 billion, added a smorgasbord of luxury beauty labels, including Yves Saint Laurent, Stella McCartney, Oscar de la Renta, Boucheron, Ermenegildo Zegna and Roger & Gallet.

“Hair dyes are a specialty with a very limited future; you’ll be ruined,” Schueller’s then chief said.

Little did he know.