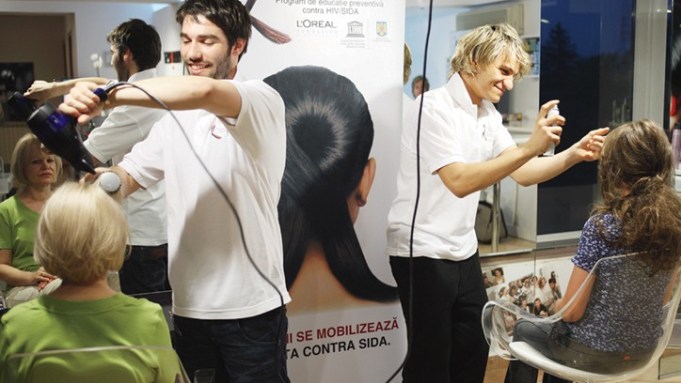 A bit of blush can lift the cheekbones, but it can also lift the spirits. Such a belief in beauty’s vital role in human well-being is the common thread running throughout L’Oréal’s philanthropic works.

Look Good…Feel Better, the first charitable cause the company took part in some 20 years ago, helps women with cancer learn how to improve their appearances through lessons in makeup and hairstyling, for instance.

Béatrice Dautresme, L’Oréal’s executive vice president of communications and external relations, explains that L’Oréal’s research done with Paris’ Institut Gustave Roussy shows that when a woman is helped to regain confidence about her appearance, it can bolster confidence in the outcome of her treatment.

“We learned very interesting things about what beauty is, what it means to human beings,” says Dautresme. “The cosmetics industry is always seen as futile and unnecessary. It’s ‘cosmetic,’ meaning it’s superficial. But actually, it is not superficial. Through that experience, we learned how extraordinarily important appearance is to human beings.”

L’Oréal’s findings on the history and power of beauty will be published this year in a five-volume oeuvre, called 100,000 Years of Beauty. For it, 300 researchers — including philosophers, paleontologists, anthropologists and psychologists — from around the world investigated why humankind has always paid so much attention to physical appearance and why the trend will continue.

L’Oréal’s philanthropic activities have grown considerably over the past two decades and run the gamut of categories, including science, education and solidarity. The company invested 25.7 million euros, or $34.8 million at current exchange, on them worldwide last year, according to the London Benchmark Group methodology.

In France, corporate philanthropy is a relatively recent phenomenon. Dautresme says it’s due to numerous factors, including the long-standing French reliance on the state to support cultural or social causes. However, in 2003, there were changes in France’s legislation allowing for corporate tax advantages.

“Philanthropy is one very important and growing element in the philosophy of the corporation,” says Dautresme. “Once these programs become really worthwhile for the community and for us, because they correspond to our values, then we make them international. So it’s not just the whim of one person in the head office. It’s not just a fashionable thing in one part of the world. It is a program that is completely supported by the whole organization worldwide, with everybody’s energy.”

In 2007, L’Oréal created a French philanthropic foundation, called the L’Oréal Corporate Foundation, which was initially funded with a minimum of 40 million euros, or $54.2 million, over a five-year period.

Among L’Oréal’s major philanthropic work is For Women in Science, a program honoring women in life sciences that was begun with UNESCO in 1998. Science “is the field where there is the least penetration for women,” says Dautresme.

At L’Oréal, it’s been noted that research teams including the same number of male and female scientists are more creative than teams comprising mostly men, she says. “They just patent more discoveries,” explains Dautresme.

Today, For Women in Science operates in 87 countries. About 500 people at L’Oréal participate in the program. And the Web site, forwomeninscience.com, has corralled a community of scientific women 5,000 strong, according to Dautresme.

“We will continue supporting women in science in a way that is not just giving awards and fellowships, but also spotlighting these women, because what we need to create are role models,” says Dautresme, adding that such programs have no hidden agendas. “We’ve never hired any of these researchers.”

“It was created through the will of our South African subsidiary to not only help their own employees but to help their partners, who are the hairdressers,” explains Dautresme. “They felt the hairdressers had a very important role to play in disseminating [information about AIDS prevention], because a hairdresser’s salon is a place of intimacy.”

She says local women sit for hours in salons getting their treatments or hairstyles done. “And you discuss every subject,” says Dautresme.

The L’Oréal program supplies hairdressers with leaflets explaining how people can protect themselves against AIDS plus training on subjects such as hygiene and health. “UNESCO was very helpful, because they gave us the real medical background on that,” she adds.

Throughout the continent’s network of 2.5 million hairdressers, approximately 100,000 have been trained yearly.

L’Oréal also supports disadvantaged young people, sponsoring a program called Accompagnement Scolaire Avec la Cité des Sciences et de l’Industrie (or Tutoring Program With the Cité des Sciences et de l’Industrie). It takes children from particular neighborhoods of Paris and its suburbs and gives them classes in the sciences. Such a program will be copied elsewhere and similar projects already are running in the U.K.

“We also have lots of fellowships with different universities,” says Dautresme.

Among the company’s acts of solidarity is a program with Médecins du Monde. L’Oréal is its exclusive partner to help fund the surgery and training of local surgeons for its Opération Sourire program. Here, the medical staff volunteers to perform reconstructive surgery on the faces of children or young adults who have been disfigured by anything from war to illness to crime.

“The idea is that we give them a new life,” says Dautresme. “You help them look normal, be normal, be able to blend in with the rest of the population.”

L’Oréal is involved in helping women in need, too. Through La Maison des Femmes de Montrouge (or The House for Women of Montrouge) with the SamuSocial de Paris, aid is given to women who have been living on the street for a long while.

Individual brands within L’Oréal also run philanthropic activities. L’Oréal Paris in the U.S., for instance, supports ovarian cancer research. Kiehl’s supports the fi ght against AIDS, and Garnier, the battle against skin cancer. The Body Shop, as well, was founded on a philosophy of sustainability, fair trade and charity.

“In general, we are very supportive of any of our brands that want to support a cause,” says Dautresme. “It has to come from them. Part of the responsibility of the philanthropy team is to help our divisions and brands in identifying good, solid partners. When we feel that they have a good idea, we strongly support them.”

To fete L’Oréal’s centenary, the company decided to create 100 philanthropic programs worldwide, which will continue after the birthday year.

Dautresme says the program is wide-reaching, including helping train underprivileged people in the fi elds of beauty, working with blind children in Thailand to help them take care of their looks and aiding deaf children in France who want to learn to be hairdressers.

“All of the countries — Ghana, South Africa, Israel, Morocco and the U.S. — are going to build on their existing volunteer program and multiply it enormously,” says Dautresme. “We want to mark the centenary as a day of caring for others, not just us.”