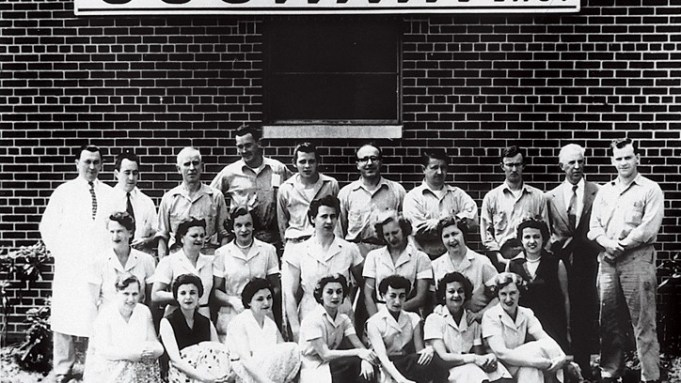 Frederic Roze is not one to be easily intimidated by adversity.

On July 1, he will take the helm of L’Oréal USA, succeeding Laurent Attal, who is being promoted back to Paris headquarters to head the company’s immense research and development effort.

When asked what in his résumé prepares him to tackle the recession-wracked North American beauty market, he points to his three-year stint in post–Soviet Russia in the early Nineties, building L’Oréal’s Consumer Products Division from the ground up. It was a wild time, but the 47-year-old Rozé remembers it as “a fantastic experience,” but clearly not without its challenges. “First year, more than 4,000 percent infl ation. We built a very strong team,” he says. “And last year, in 2008, Russia was still ahead of China” when comparing L’Oréal’s consumer products businesses in both countries.

The old Soviet system had created a creaking retail distribution network consisting of stores such as GUM. Rozé describes the market then as “a white sheet of paper. Everybody was on the same starting line. The game was how to build your brands very quickly, profitably, because the previous system had collapsed totally.”

Rozé also points out that his background equips him to handle the U.S. subsidiary with its diversity of large businesses because his previous positions required him to oversee more than the company’s mass market brands. In Argentina, he was in charge of all divisions, and in Spain he also ran “a very strong” salon professional products division. “So I know very well the business model of the luxury, the active cosmetic and the professional divisions on top of the consumer division,” he says, adding that, in his European assignment, he was in charge of businesses in 30 countries. “The [Consumer Products Division] in fact is distributed in department stores, in some perfumeries, in hypermarkets, supermarkets and some pharmacies. I know pretty well all the channels of distribution that I will have to work with in the U.S.”

Asked what is the one thing he learned that is required for success in business, Rozé replies: “It’s always possible to keep climbing up, even if the context is very, very tough. If you keep focusing on what’s really important, you can make a huge difference versus your competition.

“Be cautious of course,” he continues, “but take initiatives and take risks. You keep climbing up. You can do it much faster than someone who might be afraid. Our decision as a group [was] to maintain the advertising investment in this diffi cult context—focusing on the best innovations and the most important priorities will be very successful,” he speculates, referring to chief executive offi cer Jean-Paul Agon’s decision to step up the marketing pressure in the teeth of a worsening market. Asked what qualities he possesses that will enable him to succeed in his new job, Rozé thinks for a minute, then refers to the education he received from a high school in the Alps that specialized in sports: “It gave me this passion for competition, and within the L’Oréal Group it’s the same. I feel this fi ghting spirit every day in every country, every team, and I love that. I love to lead the teams and play to win.”

The promotion of Attal, Rozé’s 51-year-old predecessor, back to the Paris head office was precipitated by the retirement of Jean-François Grollier, 65, after 40 years with the company. He has been hailed as a visionary and the driving force in the development of L’Oréal’s industry-leading R&D complex. L’Oréal spends the most on R&D of any company in the beauty sector, at a rate of 3.3 percent of sales. A year ago, L’Oréal established an innovation department. For the first time, Attal’s responsibilities will link both departments.

Attal says, “This new organization will really foster something which is critical in our innovation process and achieve the exchanges and interaction between people, and it will provide us with a deeper observation and decoding of consumer behavior. Innovation must be organized. Otherwise, it only relies on serendipity.”

Agon said in an earlier interview Attal was picked to succeed Grollier for his background, strategic acumen and leadership abilities. Attal was trained as a physician before earning his M.B.A. degree and joining L’Oréal in 1986 and building the active cosmetics division into a global force. He transferred to New York in 2005, succeeding Agon, who also held the New York job for four years.

Attal was in charge for four of perhaps the most difficult years in the prestige market’s history. The department store backbone underwent a dramatic contraction when Macy’s took over May Co. and accentuated an industrywide consolidation. Then came last fall’s global financial meltdown. Attal now proudly points to market share gains made last year by L’Oréal’s mass market, salon products and active cosmetics divisions — three of L’Oréal’s four pillars. But, like other firms, L’Oréal suffered greatly in its department store luxury business, or, as Attal put it, was “adversely affected.”

During the last four years, Attal states that his objective has been to continue building sustainable businesses, an effort he frames by recounting four steps. In the salon professional market, L’Oréal acquired four distribution companies, representing more than 50 percent of the business, including 600 stores. The second step was the acceleration of the mass market skin care business with the launch of Nutritioniste by Garnier, reaping five market share points. The third key move was the further diversification into new distribution channels for the embattled luxury division into e-commerce, including more freestanding stores with the Kiehl’s brand, and direct-response TV selling. The fourth pillar was the gradual deployment of the dermocosmetics brands of the active division into the Northeast and California.

One conclusion that can be drawn from these difficult times, he says, is “beauty consumers are more discerning and more price sensitive, and they respond positively to innovation. [It] creates value. A focus on innovation is a key success factor in difficult times.”

Thanks to the acquisitions of SkinCeuticals, PureOlogy and the four salon distribution companies, L’Oréal USA increased its North American sales over the last four years by 20 percent to 3.7 billion euros, or $5.4 billion at current exchange, by the end of last year, Attal says.

Asked what challenges he had to overcome, Attal notes the 17-month recession had to be confronted with “a much greater focus on innovation, fixed costs and promotional calendar. I have had to make some difficult and painful decisions in adjusting our structure,” he adds, alluding to the axing of 500 jobs in December, 4.8 percent of L’Oréal USA’s workforce.

Attal says it is difficult to predict when the market will improve, but notes that it seems the climate will improve gradually “in the back half of 2009.” He adds, “Our objective is to beat the market, to outperform the market over the 2009 year.”

Despite the difficulties and some sniping from Wall Street, Agon praised Attal at the time of his promotion, saying he “did a terrific job in a difficult environment during the last four years.”

Attal says he is most proud of the market share gains and what he calls the internationalization of L’Oréal’s American-based brands, ranging from Redken and Matrix in salon products to Maybelline New York in mass to Kiehl’s in the luxury division. Two of the new acquisitions, SkinCeuticals and PureOlogy, “are both rolling out very strongly in Europe and in Asia,” he notes. Attal says he also takes pride in the modernizing of the company’s systems with the
implementation of the SAP software system.

Attal says his legacy will be to leave behind a “more customer-central organization as well as a more employee-centric culture.” And, while there have been a few high-level defections to other industries, Attal maintains “we have a new generation of very strong managers with strong leadership. I’m extremely confident about the new generation.” He adds, “We have a very strong American executive profile.”

Rozé notes, “The first thing I have to do is to build on what Jean-Paul and Laurent did in this country.” He ticks off a couple of growth ideas — accelerated development of the active brands La Roche-Posay, Vichy and SkinCeuticals. “We can build a very important business, a multiple of $100 million of turnover,” he says. Despite some Wall Street criticism of the salon market acquisitions, Rozé maintains that L’Oréal can capitalize on the insights gleaned from controlling 50 percent of the distribution channel with more effective sales techniques and more innovative products.

But Rozé’s biggest challenge is the one that preoccupies everyone from L’Oréal’s Clichy, France, headquarters to the White House in Washington: “The American crisis….But we will face it with a lot of confidence in our business model — we are resilient,” he says.

“The American people, they want to overcome these difficulties and they want to prove that it’s possible [to do it] very quickly. It’s a great optimism, a lot of energy, it’s fantastic.”

Attal praises his team, asserting that he will leave the U.S. business “impressed by the courage, the loyalty, the initiative of our L’Oréal USA people. It’s quite amazing.”

“When you are just about to leave such an important country, that makes you extremely confident,” he continues. “People behave in a way which is quite extraordinary. This is our greatest asset, most precious asset by far. It’s a very, very good team. We have many talented people.”