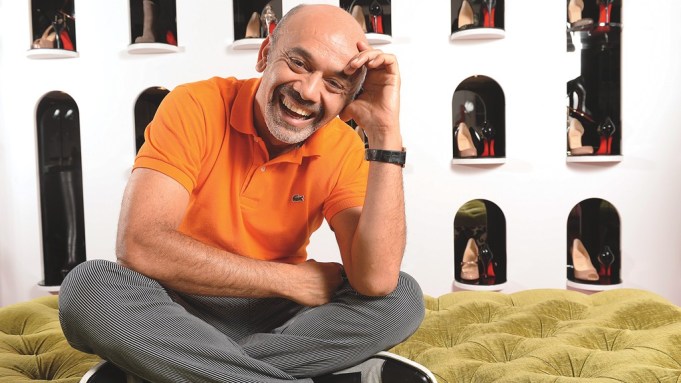 PARIS — Back in 1992, surveying one design from his third signature footwear collection, Christian Louboutin was dismayed that the actual shoe wasn’t as colorful and compelling as his original sketch, especially underneath.

And so he snatched a jar of nail varnish from an assistant, who howled in protest, and his famous red soles were born.

Now the French footwear guru is taking his first steps into the beauty business with a range of signature polishes housed in strikingly tall, spiky bottles.

Priced at $50 each, the well-heeled, red nail enamel, Rouge Louboutin, is scheduled to go on sale today in a U.S. concession shop on the eighth floor at the Saks Fifth Avenue flagship in New York and the 15 Louboutin boutiques in the U.S. Saks will devote five display windows to the launch, with each filled with a display of an imaginary city, called Loubiville, whose architectural shapes give hints of products to come.

The rest of Louboutin’s U.S. distribution — the remainder of Saks doors, Neiman Marcus, Bergdorf Goodman, Nordstrom and select Sephora stores — will unveil the Rouge nail polish on Aug. 6, displaying the new beauty product alongside his footwear collections. The remaining 30 shades will be available throughout the U.S. distribution on Aug. 31, according to Catherine Roggero, general manager of Christian Louboutin Beauté. The new beauty company is a joint venture between Christian Louboutin’s fashion company and New York-based Batallure Beauty. The month-long lag in distribution rollout between the red polish and the 30 remaining shades is designed to give the Rouge enamel its own time in the merchandising spotlight.

“If I do beauty, I have to do it my way,” the designer said in an interview at his Paris studio, seated at a table strewn with the pointy products, like a forest of obelisks, one of the inspirations behind the unusual packaging. “I am someone who likes objects.”

The foray into beauty comes at a time of strong momentum for the Paris-based footwear firm, which now produces close to a million pairs of shoes a year and continues its global retail march.

The firm counted 63 freestanding stores and 29 shops-in-shop, all directly controlled, as of June 30, and it plans to add 15 additional units over the next 12 months, including locations in Paris, New York, Atlanta, Houston, Chicago, Shanghai, Beijing and Hakata-ku, Japan, according to Alexis Mourot, chief operating officer and general manager of the privately held firm.

He declined to disclose figures, but said the firm continues to post “very high double-digit growth,” with men’s footwear one of the fastest growing categories, only three years after Louboutin introduced his first men’s only shop and a full men’s product range.

The brand is also accentuating its hyper-luxurious positioning, with beauty products priced even higher than elite brands such as Tom Ford and Chanel, and via bespoke retail installations, such as a main-floor concession unit at the Printemps flagship here on the Boulevard Haussmann that will showcase women’s shoes and leather goods with beauty products in the middle. Louboutin described the shop, due to open on Aug. 25, as “a peninsula of beauty.”

“This is the launch of a true luxury beauty company,” said Robin Burns-McNeill, chairman of Batallure Beauty and cofounder of Christian Louboutin Beauté. She noted that the company revolves around Louboutin as a brand and a commitment to push the innovation envelope from product conception to packaging to distribution. Burns-McNeill said the company will unfold more product categories within the next 24 months.

A tight distribution for the Christian Louboutin Nail Colour with “core partners” around the world accentuates the exclusive approach, according to Mourot, a former Marc Jacobs executive tapped in 2007 to spearhead its retail push and pilot the company’s explosive growth.

The Rouge nail enamel line will be launched in northern Europe in early August and in markets on the southern rim of the continent in late August, with the rest of the line following a month later, a pattern to be repeated around the world. The Rouge shade will bow in Ireland’s Brown Thomas on Aug. 7, and make its debut in Milan at Antonia’s on Aug. 25. In the U.K., the Rouge enamel will go on sale Aug. 14 with distribution at Selfridges, Harrods and Harvey Nichols. In Germany and Switzerland, the brand will be unveiled on Aug. 1, the same date as the Hong Kong entrance at Lane Crawford. The Middle East will get the polish on Sept. 10, according to Roggero.

Total distribution adds up to about 100 doors worldwide. While none of the executives would discuss sales projections, industry sources estimate that first-year sales could land in the neighborhood of $3 million at retail.

While Louboutin created a film with David Lynch as a teaser for the polish for the brand’s Web site and social media — where it boasts 1.4 million followers on Twitter and 2.7 million fans on Facebook and Instagram — the company has not planned an ad campaign, and recognized that “it’ll take more time” with the beauty foray, given its unconventional approach, Mourot noted.

Louboutin said polish seemed the most obvious beauty category for him to enter, given that the color of nails is a crucial question when he works with photographers such as Peter Lippmann to produce look books of his collections.

At $50 for a bottle of polish and $55 for the necessary care kit, Louboutin’s nail enamel is not for the budget shopper. The brand will be marketed as a genuine luxury experience, with what executives say is the highest percentage of pigment in the industry and an eye-catching bottle and wandlike cap that looks like it would be more at home in an art gallery than on a dressing table. The 16-faceted bottle, produced by Pochet, has its edges smoothed with a hand-held flame. Likewise, the little box container is also made by hand. Roggero said it takes 22 weeks to make each piece.

A stickler for detail, and a fan of vivid colors, Louboutin described how sandals and peep-toe styles sometimes call for nude polish to lengthen toes and the leg line; at other times a juicy contrasting shade shortens the effect for long toes.

“I always end up questioning myself, ‘What should be on the nail?’” he said, contemplating, for example, the look of a light magenta nail with a burgundy sandal.

The designer grouped his polishes into in three color families — Pop, Nude and Noir — with the signature Louboutin red getting its own special packaging: a glass orb in gradient shades of black, and a black cap taller than the rest — and the same height as a fantasy ballerina shoe with an impossibly high stiletto heel, the fruit of a 2007 photography collaboration titled “Fetish” with Lynch.

Louboutin said many beauty companies have approached him over the years, and he actually did a one-off red polish for MAC Cosmetics in the U.S. only, an initiative fronted by Linda Evangelista.

So why did he go all the way now with his own brand? “The idea is definitely not to put my name on a new product,” he stressed. Still, the advent of the so-called Louboutin manicure, a process born in London salons that involves a lick of red on the underside of nails, helped convince him that nail polish was a legitimate territory for his brand.

He credits now retired Le Figaro journalist Janie Samet for suggesting he do varnish in the shades of his soles while the two watched a Jeremy Scott fashion show in Paris. “It made sense to me,” Louboutin said. “A lot of signs were there.”

He certainly had definitive ideas, including that the bottle should have an architectural aspect. He initially approached Oscar Niemeyer about the project, but the Brazilian architect did not have time for it and subsequently passed away at the end of 2012.

Louboutin’s final design consists of basic forms: a faceted glass base incorporating square and round shapes, plus a spirelike cap evoking a finial on a building — or a cone-shaped heel. “I wanted the color to be almost frozen in a pack of glass,” he said. “It’s actually a very classical bottle.”

The designer was also insistent that the formulations had to produce a strong color, but without any buildup on the nails, approximating the richness and finesse of the best Chinese or Japanese lacquers. “It’s depth without thickness,” he explained.

Louboutin said he plans to add new polish colors to accompany new collections of shoes — at least twice a year — and to open a dedicated shop for beauty in Paris at the end of the year in the Galerie Véro-Dodat, a covered passage from the early 1800s where he operates women’s and men’s boutiques, plus an elite cobbler stand.

As an example of attention to detail, the underside of the cap, like the bottom of a shoe, is colored in signature red. The long cap, inspired by a calligraphy brush, is bottom-weighted to make it more manageable. Sources suggest lipstick could be the next step for Christian Louboutin Beauté, red lips being another logical jump from red soles. He alluded to coming chapters in the beauty saga but declined to elaborate.

The nail polish arrives at a time when Louboutin’s core business is roaring ahead. Today, retail generates about two thirds of revenues, versus only 15 percent in 2008, when the company embarked on its retail expansion.

The company has reduced its total wholesale doors to prioritize ones that can showcase its collections, and “we continue to grow with our existing partners,” Mourot noted.

At present, 75 percent of revenues come from women’s shoes, 18 percent from men’s shoes, and 7 percent from handbags and small leather goods, he said, noting of the latter category: “We could easily double or triple it in the next years.”

The company has started to intensify events around its accessories, and add ground-floor concessions in stores such as Harvey Nichols in London.

The U.S. remains Louboutin’s biggest market, but its geographic breakdown of revenues is more balanced than five years ago, with the Americas representing 43 percent; Europe and the Middle East 41 percent, and 16 percent for Asia, including Japan.

“We see opportunities in all of these regions,” Mourot noted, adding, “We’re seeing very high growth, even in Europe.”

In China, meanwhile, the company is opening stores in what Mourot called “destination malls” rather than commercial ones, to reinforce its positioning.

He noted the highly publicized court battle in 2012 against Yves Saint Laurent over the use of Louboutin’s coveted red sole telegraphed that the company was serious about protecting its intellectual property, which has discouraged its use by would-be copycats.

That year, a New York federal appeals court backed the validity of Louboutin’s red-sole trademark but said the French shoemaker would only be able to protect its mark when it comes to red-soled shoes with contrasting uppers.