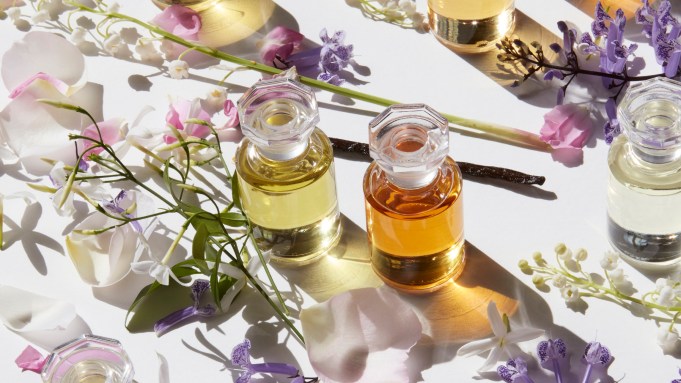 PARIS – Louis Vuitton is journeying back into the world of perfumes.

Ninety years after its last fragrances came out, the brand is set to introduce Les Parfums, a collection of seven women’s scents starting Sept. 1 in some 200 of its stores.

“It’s really exciting to create a new area of craftsmanship at Louis Vuitton: This launch is a natural progression, given the very long hiatus that followed the launch of our first fragrances in the Twenties,” said Michael Burke, chairman and chief executive officer of the LVMH Moët Hennessy Louis Vuitton-owned label, referring to Heures d’Absence from 1927 and Je, Tu, Il from 1928.

“We wanted to accompany [our clients] in a new, more intimate realm, just as we have done in leather working from the very beginning,” continued Burke. “A number of elements had come together perfectly — a place, a nose and a brand. Once these three elements finally came into alignment, we were ready to launch the project.”

The fragrance volley comes at a moment of modest growth for Vuitton’s parent company, leather goods powerhouse LVMH, and the luxury sector in general. In the first half of 2016, sales of LVMH’s fashion and leather goods divisions were flat, which compared to 8 percent growth in revenues of its perfumes and cosmetics divisions.

“It’s important to surprise,” continued Burke. “We wanted to offer creations that reflect life as it is now — modern and multifaceted.”

“I wanted to celebrate women and their universal values — femininity in the world,” explained in-house master perfumer Jacques Cavallier-Belletrud. “I think that perfumes have to be back in luxury. So for that you need exceptional materials — ideas and materials.

“I put in all my philosophy of creation, based on fluidity and light,” he continued. “I consider in luxury you don’t have to be aggressive in the top note. You have to surprise without being bizarre. I was totally free to create what I wanted — no brief, no test.”

Flowers take center stage in the line of eaux de parfums meant to correspond to seven olfactive journeys that industry sources estimate will generate 60 million euros, or $67.2 million at current exchange, in retail sales during its first year.

The Rose des Vents fragrance mixes a trio of roses. “I have a passion for [them],” said Cavallier-Belletrud. “For this I used an exceptional rose at the heart of the fragrance — the rose de Mai from Grasse, [France].”

Centifolia absolute was obtained through a carbon dioxide extraction, a process exclusive to Vuitton in the region, which is done with Firmenich.

The Turkish rose and Bulgarian rose essences were steam distilled. There’s also a Florentine iris and a Virginia cedar note.

The Turbulences scent is linked to a memory Cavallier-Belletrud had from his garden in Cabris, near Grasse, where he has 2,000 jasmine plants and 1,000 tuberose flowers. It was August at about 1 a.m. and the perfumer was talking to his 80-plus-year-old father (also in the trade), who said he remained fascinated by the mix of aromas.

“I wanted to capture this moment and to put it in a bottle,” he said. “Tuberose is very narcotic and dynamic, and it can be dangerous also.”

In Dans La Peau (translated as Under My Skin) he balanced a CO2 extraction of jasmine from Grasse and sambac jasmine from China, along with a leather note.

“I was dreaming of creating a new type of leather note,” he said, adding that when he was at Vuitton’s atelier, he saw a type that is exclusive to the house. Cavallier-Belletrud asked it to be sent to him, and he tried various extraction methods before resorting to a natural infusion, involving alcohol, leather and some heat, which was used in Grasse 200 years ago.

The perfume also includes a smidgen of Chinese magnolia, plus absolute of narcissus and numerous musk notes.

The Apogée fragrance, meanwhile, is a pure floral, a tribute to lily of the valley and to the Japanese art of floral arrangement, called ikebana.

The fragrance contains as well a note of May rose and in the base a guaiac wood note and sandalwood essence.

Cavallier-Belletrud called Contre Moi (or Close to Me) a “new oriental” fragrance that has vanilla.

“The smell of this quality is really like cake, very soft — not sweet,” he explained of the vanilla from Tahiti. Included, too, is vanilla infusion from Madagascar with a more leathery and animalic quality.

“I wanted this oriental to be full of light, full of air — very radiant without being heavy,” he said, explaining what lasts on the skin is the contrast between the vanilla and flowers, such as orange blossom, rose centifolia and magnolia essence. “All of my creations are like this. It’s making the accord living on the skin with a lot of facets.”

Other notes are bitter cocoa and ambrette seed.

Matière Noire (or Black Matter) is a “modern chypre” with a note of agarwood from Laos. Cavallier-Belletrud called its odor “very woody, deep, black, spicy like saffron and leathery. It’s lasting.”

The perfume Mille Feux (or Thousand Fires) is also based on a leather infusion. “The story started from a visit to an atelier, where I was looking at a woman who was making a [Vuitton] Capucines bag,” he said. “The color was special…a very intense red.”

That made him think of raspberry, for its hue, light freshness and fruity quality. Cavallier-Belletrud found that the fragrance of the osmantus flower, with a velvety apricot and animalic scent, from China worked well with the raspberry and leather infusion.

“So I put a huge amount of osmantus absolute in this fragrance,” he explained.

There’s also a bit of iris concrete and a saffron note.

“Fragrance for me is emotions,” said Cavallier-Belletrud. “I didn’t work to please everybody. I worked with strong intentions, strong ideals in order to deliver some different things in the collection.”

Marc Newson created the streamlined Vuitton fragrance bottles. Each has its name in black lettering, while the Louis Vuitton name is engraved in the glass below. The cap carries the initials LV, while the cylindrical white-and-gold paper packaging replicates that of Je, Tu, Il.

Vuitton created a mini trunk that can hold three fragrances, which costs $4,900. Scent ingredients are to be on display in trunks in flagship Vuitton stores.

The advertising campaign for the perfumes will feature French actress Léa Seydoux.

The line was conceived in Cavallier-Belletrud’s atelier, which stands in a domain called Les Fontaines Parfumées that Louis Vuitton acquired in 2013 in the center of Grasse, considered the birthplace of modern perfumery.