LBP has backed several companies that have gone on to strategic-buyer exits — including Oribe and Pulp Riot.

Luxury Brand Partners, the incubator that built Oribe, Pulp Riot and a slew of other brands, has received a $50 million minority investment from Bookend Capital Partners.

LBP chief executive officer Tevya Finger said he expects Bookend and its founder Alexander Panos to be involved in multiple areas of the business, including executive placement. Panos, a former TSG managing director, will also join LBP’s board.

Specific terms of the deal were not disclosed, but industry sources indicated Bookend took a small minority stake in the business. According to industry sources, Luxury Brand Partners is said to be on track to do $500 million in sales for 2020. 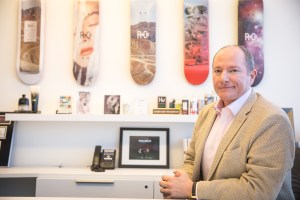 LBP was early to the brand incubation model that has become popular in the past year, and has partnered with experts and influencers to bring a variety of beauty brands to the market. Similar models have followed, including Deciem, as well as  incubators like Beach House, which makes the brands of Millie Bobby Brown and Tracee Ellis Ross, Bespoke Beauty Brands, which partnered with drag queen Kim Chi, or HipDot, which partnered with Spongebob and Kesha.

For LBP, the Bookend deal is a means to accelerate growth and launch even more brands. Historically, the company has debuted about one new brand per year, but now, hopes to launch two to three, Finger said.

The company has been behind several well-known brands, many of which it has sold to strategic buyers. LBP developed Oribe, which sold to Kao for about $400 million in 2017. The group also developed Pulp Riot, which L’Oréal is said to have paid more than $100 million for, and turned around Becca Cosmetics before selling it to the Estée Lauder Cos. Inc. for an estimated $230 million.

“There’s so much influencer action, so a lot of the focus is cool brands mixed with really great influencer faces,” Finger said. “Moving forward, that’s where a lot of the activity seems to be.

“From afar, [Panos] has watched us build brands,” Finger said. “We came close to making some investment in individual brands or partnering, but we never did, so it’s kind of fun a decade later to bring [him in on] the LBP level.”

Dan Langer, LBP chief marketing officer, added, “LBP’s mandate is similar to Day One, to develop and nurture these artist driven brands…that’ll continue, this will just allow us to do it more often.”

The hope is that it’ll also allow LBP access to a bigger pool of potential executives, which it’ll need in order to run the brands.

“We’re constantly looking for management for these brands,” Finger said. “If we start three brands in 2020, which is what we’re planning on doing, you need three presidents, three product developers, potentially some sales people…[Panos] just knows who’s out there, which for us, is really helpful.”

“This investment enables us to continue and accelerate this incubation model,” said LBP chief operating officer Nancy Bernardini, who noted that the firm has seen an uptick in inbound inquiries from founders looking to partner with LBP.

“When we do invest in building brands, it really is great to have someone with the private equity mind-set to help us analyze that what we’re doing makes sense,” Finger said. “While we’re getting more analytical over time, that’s their starting point.”

While LBP plans to ramp up its brand launches, the business is also weighing the possibility of add-on acquisitions, Langer said. “A lot of the discussion we’ve had with Alex is about us looking at opportunities together,” he said. Finger added that the business would consider acquiring companies Panos looks at that could benefit from LBP’s shared-services ecosystem.

Finger noted that it’s likely more LBP brands will be sold, but the possibility of selling the entire business is small. “If someone came along and really saw…the value of having an incubator plus an operator, we’re business people, we’re always open to discussions,” Finger said.