MAC Cosmetics wants its stores to be entertaining.

The company is piloting a digitally integrated retail concept in the Long Island City neighborhood of Queens, New York. The MAC Innovation Lab: Queens Center will test a variety of omnichannel experiences and adopt a localized approach meant to cater to the Queens community.

MAC unveiled its Innovation Lab concept in China, where it has been frequented by 80,000 shoppers. Queens marks its debut Stateside.

“Product discovery is happening on social, digital. The role of the store has to become a place of experience and entertainment,” Pinatel said. “This store is delivering the ability to adapt to a local community from an assortment point of view [and] a content storytelling point of view. This store will present content [and] looks that speak to the community.” 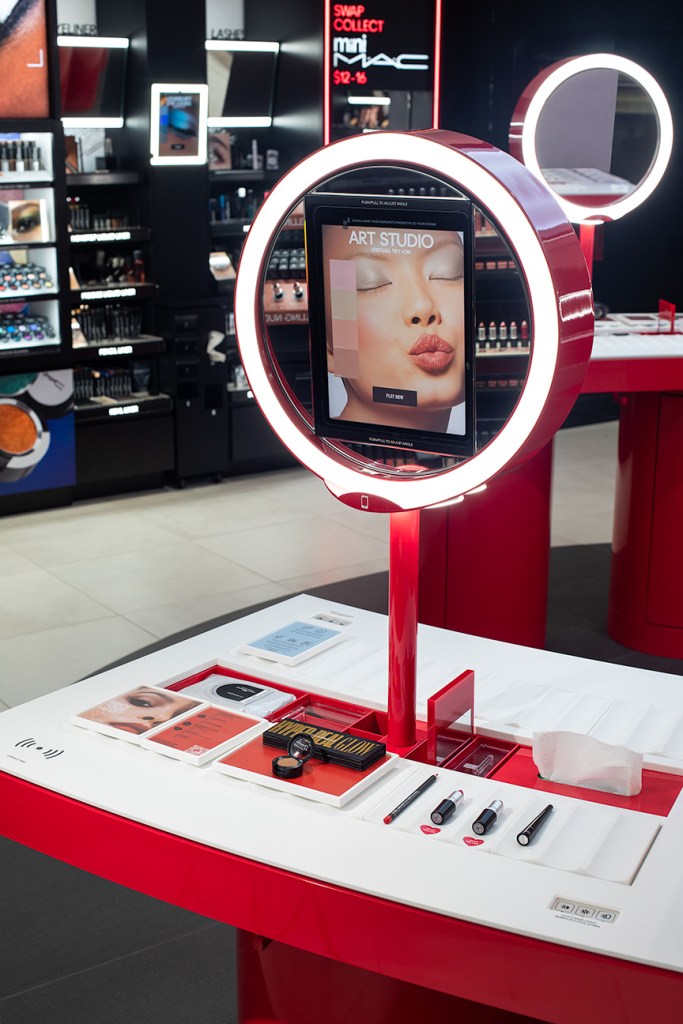 MAC Innovation Lab: Queens Center features an open floor plan, at the center of which sits the Art Studio. Accented by MAC’s Ruby Woo lip shade, the studio has 16 stations furnished with augmented reality virtual try-on mirrors. There is a “Design Your Palette” station, which allows customers to choose from 108 eye shadow shades to create their own palettes. There is also a printing station, where shoppers can add images, text, emojis and MAC-branded stickers to the products they purchase.

Digital touch screens and QR codes are available throughout the store, which can also be navigated using MAC’s mobile store portal.

Though MAC was forced to close its stores due to the pandemic, the company has seen “very high double-digit to, sometimes, triple-digit” growth in its e-commerce business, according to Pinatel. Virtual try-on is also drumming up online consumer engagement, which has increased threefold, he said.

Innovation Lab will follow local regulation regarding COVID-19. A limited number of shoppers will be allowed into the store at one time. They won’t be able to touch products without assistance from MAC employees.

“This concept takes more than a year if you want to do it well, so it’s been in the works for quite some time,” Pinatel said. “The opportunity to launch it during COVID-19 was to understand with the rapid shift in commerce that we see today during this crisis, what will be the store of tomorrow that will work in a commerce where online and social have taken a much bigger part of consumer interest.”