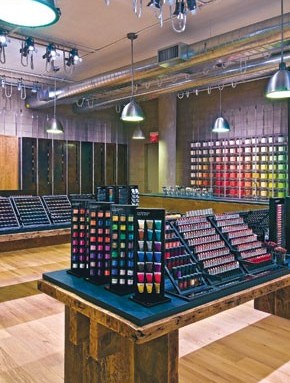 There’s a new concept in store for MAC Cosmetics: a prototype for all the brand’s future Pro Stores.

The Estée Lauder Cos.-owned makeup artist brand has created a new retail format on the second floor of a historic building in Manhattan’s Flatiron District. It is designed not only to be a retail outlet, but also an education center for the industry and a new way to communicate with makeup artists, said James Gager, senior vice president and creative director of MAC Worldwide.

“The original space was something neither Sheila [Choi, vice president of store design for MAC Worldwide] nor I designed, and when I first saw it I was shocked, because it looked like any other retail space,” said Gager. “It didn’t fit the profile of what I thought MAC Pro should represent. When we had the opportunity to acquire a new space, we were excited to build our dream store from the ground up. Hopefully, this will be a great stepping stone for building similar facilities in key international cities. We’re being evolutionary, not revolutionary.”

The 6,000-square-foot space, a collaboration between Gager, Choi and Tim Tareco, vice president of visual merchandising for MAC Worldwide, is intended to resemble a futuristic laboratory.

“We had a vision of old chem lab meets the world of color,” said Gager, gesturing to a full wall of color pigments in mason jars, a futuristic photo studio and a loftlike library space with modernist furniture. Products are shown on wood display tables resembling halved trees, while a metal mixing area will eventually allow makeup artists to custom-blend their own colors (Gordon Espinet, vice president of makeup artistry, hopes to have the custom program up and running by yearend). Oiled metal cabinets hold stock overflow.

Added Choi, “The space is like a work lab environment with a twist. The rawness stems from the basic unpretentious materials, salvaged wood, concrete blocks, metal chain-link, etc., but the impact is from the scale and unexpected usage and combination of these materials.”

In the store’s library area, makeup artists can leaf through the vast inventory of design, art, pop culture and fashion books for inspiration, photocopying anything that catches their fancy at the color copier nearby.

An onsite photo studio is intended to help budding artists build their books, said Gager. “I always wanted to have a photo studio in-store so that photography students could work on their books and makeup artists could build their portfolios,” he said. “And we want to reinvent interactivity. We want artists to come in here and have fun playing with makeup ­— and they too can use the studio, to document what they’ve done.”

The store is stocked not only with MAC’s full retail line, but also with the MAC Pro line, a collection of cutting-edge products designed for professional makeup artists. The line, which consists of just under 500 stockkeeping units, includes products specifically intended to stand up to the demands of fashion shows, photo shoots and TV and film sets. It is available in MAC’s 12 North American Pro Stores and 13 international stores.

“Our Pro consumer is very different from a consumer customer,” said Nicholas Gavrelis, executive director of global product development for MAC Cosmetics. “They need ranges of products that an average consumer might not use — body makeup with high pigment loads, primary and secondary colors, black and white makeup, airbrush body paint. They need things that look great on stage — for instance, we have been working with Cirque de Soleil, and they use sculpting powders and other products that achieve a theatrical look without being overdone.”

The Pro Store also carries six mixing mediums, which allow makeup artists to essentially create their own cosmetics. “The water-based medium will turn powders into paint that can be used on the face, eyes and body, while an alcohol base will make a paint effect that requires oil to remove,” explained Gavrelis. “We also have an eyeliner medium, a mascara mixing medium, a body gel medium with polymers to adhere things like glitter to the body, and a face and body makeup mixing medium.”

The mixing station at the new Pro Store allows makeup artists to take that customized idea to the next level, said Gavrelis. “This area is going to be step one in getting us to where we want to be in the future — able to custom-mix on the spot very quickly in-store. Right now, it is very achievable in smaller quantities, but our dream is to be able to create new textures, mediums and colors quickly and in quantity with this area.” It also serves as an acid test for artist usefulness. “The quicker artists buy into something, the sooner that it will likely get translated to the consumer level,” he said.

The back half of the store contains two training rooms, where classes are held, as well as showers (to wash off body paint).

While none of the executives would comment on sales projections, industry sources estimated that the store could do $1.3 million in retail sales in its first year of operation.