Whether it's called eye catcher or rock ’n’ roll, the graphic eye dominated the catwalk during the Fall 2015 fashion season. 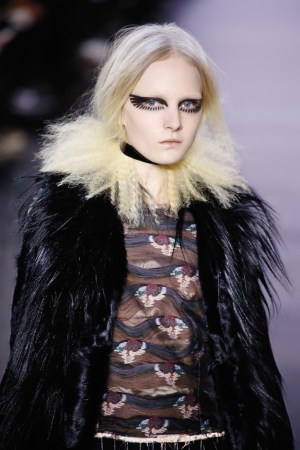 Peter Philips calls it the “eye catcher”; Tom Pecheux says it’s rock ’n’ roll. No matter how you spin it, the graphic eye dominated the catwalks during the Fall 2015 fashion season. “Graphic has a certain power,” says Pecheux, who created the looks at Chanel and Anthony Vaccarello. “When you see smoky, you think of something more light, gentle and romantic. Graphic is more powerful.” Philips says it’s also animalistic. At Dior, designer Raf Simons referenced “la femme animale,” which inspired Philips to draw a graphic interpretation of an animal print on the eyes.

“I made sure the look was new and strong,” he says. “We’ve had a few seasons of very nude faces, so it’s saying, ‘Let’s play again with makeup and make it a bit more exciting.’”