The two have signed a "very long-term agreement," according to Edgar Huber, Coty Luxury president.

Marc Jacobs and Coty are renewing their vows.

Three weeks after marrying Char Defrancesco, Jacobs is saying “I do” to a different kind of partnership. The designer has re-signed his fragrance license with Coty Inc., according to Coty Luxury president Edgar Huber.

“It’s a very long-term agreement, believe me. I hope his marriage will last as long as our agreement,” said Huber, who declined to specify the length of the license. “We have a successful partnership for many, many years together. We have developed a business all over the world — it’s a strong brand. We know the success of the Marc Jacobs fashion label, so for us, it’s a serious partnership and we are happy and proud we could re-sign this license for a very long time.” 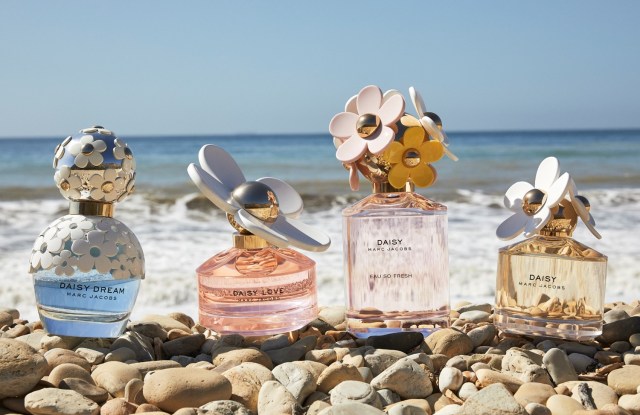 The Marc Jacobs Daisy family has been a top performer in Coty’s luxury fragrance portfolio. The franchise brings in around $300 million in retail sales annually, according to industry sources, and saw double-digit growth throughout 2017 and 2018.

According to The NPD Group, Daisy was the fastest-growing women’s fragrance franchise in the U.S. in 2018. Two Daisy fragrances were sold every minute in the U.S., and Daisy Love was the number-one U.S. women’s launch based on unit sales.

Since its launch in 2007, the Daisy franchise has expanded to include five core fragrances. The newest addition, Daisy Love Eau So Sweet, was a strategic play at keeping the franchise fresh and satisfying demand for it, said Jacobs.

“When something is this kind of success, it’s important to keep it fresh and relevant,” the designer said. “Fragrance is different, obviously, than fashion. We live in a world where people who are enthusiastic about what you do want constant newness and activations. That’s true of clothes, shoes, bags and cosmetics — and certainly fragrance.”

The Daisy customer ranges in age, and the fragrance “represents a kind of youth, freshness, it’s a dream of love,” said Jacobs.

According to Andra Mielnicki, Coty’s vice president of influencer marketing, influencers have become a large part of the marketing strategy and are helping the brand target Gen Z and Millennial customers.

“The line between consumer and influencer is completely blurred and you see that in this Millennial and Gen Z target,” said Mielnicki. “They’re brand loyalists, they’re the ones who want to engage in the conversation, so we look at influencers as a way to jump-start that conversation, but to find a way to pull the consumer into that.”

Faced with the limitations of fragrance on social media — i.e., the inability to smell it, Mielnicki and her team have turned to experiential activations as a means of bringing in new consumers. “Once you can get them there [and] smell the fragrance, we know we have a more captive audience,” she said.

Jacobs, too, is increasingly aware of the value of social media. Once an Instagram skeptic, he is now “hooked” on the platform “completely.”

“I understand the importance of social media and I certainly understand or can get my head around and believe in the importance of influencers,” said Jacobs. “When I started out, we reached people through reviews that were written by certain trade publications or reviews in newspapers and then you had editorial and print magazines. Now, in the digital world, people look toward YouTube and social media and influencers. I learn from younger people right now more than I do from people more mature than me. That used to be the opposite. When I was young, I could only learn from people older than me and right now, where I’m at at this age and this point in my career, I can only learn from what younger people’s habits are, where they receive information, how they communicate with each other. That is an important piece of the communication puzzle.”