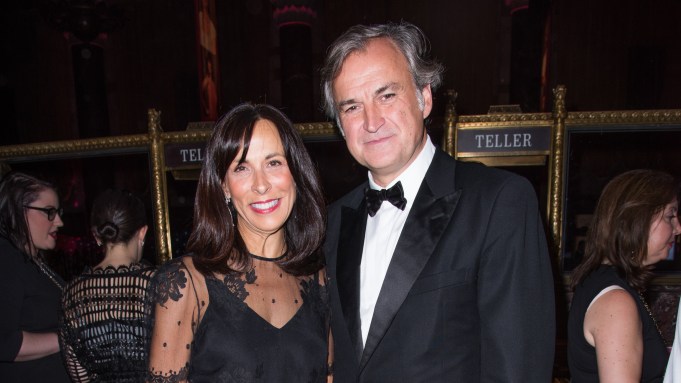 The usually celebratory DreamBall hit a higher octave when this year’s Dreamgirls sang a duet.

Crooning to the crowd of beauty and fashion industry insiders on Wednesday, Dreamgirls Calysta Bevier and Valisia LeKae belted out a motivational number — a rendition of Rachel Platten’s “Fight Song” that segued into “Rise Up” by Andra Day.

The response from the crowd inside Cipriani on 42nd Street was emotional, eliciting tears in some audience members. It was an emotional night in general for the evening’s first honoree, Estée Lauder senior vice president and general manager of international and designer fragrances Daniel Annese. “I think everyone here tonight would agree that the two most important gifts in life are family and health,” Annese said in his acceptance speech. “Twenty years ago I had the fortune to join another family at Estée Lauder…this very special family has always fostered a company culture that values people above all else and encourages all of its employees to give back.”

Bevier and LeKae are ovarian cancer survivors who have both benefited from the initiatives of the Look Good Feel Better foundation, which provides beauty services to women undergoing cancer treatment. Annese noted that it was Evelyn Lauder, upon discovering that he was a former makeup artist, who made the initial suggestion that he join the Look Good Feel Better foundation as a volunteer. He recalled her comment to him: ”Daniel, you do a damn good brow.”

For Marc Rey, the night’s second honoree, the connection wasn’t as personal, but it was no less relevant.

“Beyond the cause, the name summarizes very well what the beauty industry stands for,” said Rey, who spoke of the acceptance he has found within the beauty industry community. “Believe me, 10 years ago nobody needed another Frenchman in New York City who didn’t even know beauty.”

But Rey seems to have had no trouble assimilating. “More than dressing up, it’s nice to be among friends,” he said at the cocktail hour.

Over the course of the night, host Tamron Hall kept the beauty-related joke fodder going, tinged with some relevant political humor. “I’m not feeling my hair tonight,” she said as she took the stage. “I feel like Donald Trump.”