The executive, who ran Puig for more than three decades, passed away this week at the age of 93.

PARIS — The late Mariano Puig Planas, who steered his family’s company Puig for more than three decades and grew it into an international powerhouse, lived a large life.

The executive passed away on Tuesday at the age of 93 and was given an intimate religious service Wednesday afternoon at the Iglesia de la Bonanova in Barcelona.

Part of his colorful story was recounted in a book, “Puig 100 Years of a Family Business,” which was released for the group’s centennial in 2014 and describes the history of three generations of Puig family members.

Following are some extracts from the book, including quotes from and about Mariano Puig.

At the age of 18, he went to learn about cosmetics at the fragrance and flavors supplier Givaudan in Geneva, in keeping with his father’s vision of life.

“There are five stages of life,” Antonio Puig Sr. was quoted as saying. “The first is learning how to do something; the second, doing it; the third, really doing it; the fourth, teaching how to do it, and the last, letting go and letting others do it.”

Mariano Puig said: “He progressively granted us more responsibility. It wasn’t a matter of a day or a week, or even an hour, but a process. He was a very generous man.”

Before Antonio Puig’s passing, he asked his sons who were running Puig to take care of their mother and remain together. Antonio Puig and his wife Júlia imparted a deep sense of ethics.

“What has characterized the four brothers has been communication,” said Mariano Puig. “We have never made an important decision without dialogue, by telephone, during weekends, or in a more formal fashion. We have not always been in agreement, but we have always come to an agreement.” 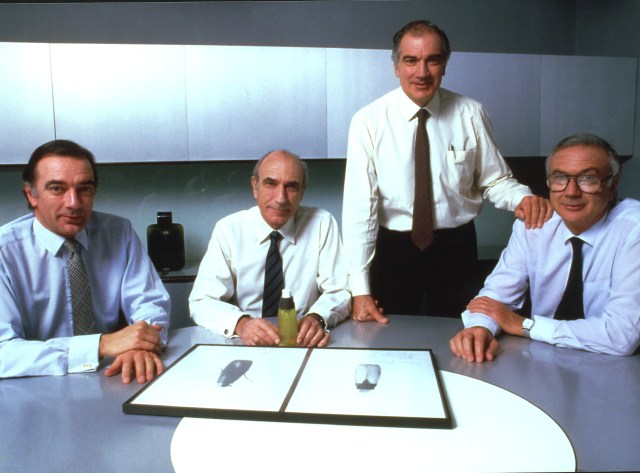 The executive was known for his business acumen, leadership ability and nose for growth opportunities.

“I like to confront the waves, but I also want to avoid storms,” he said, employing a metaphor channeling his love of the sea.

Puig said he and his brothers made three important decisions, including building a team in which each member knew more in their field of expertise than they did. “Then we created a product. And third, we developed an international vision for the company,” he said.

For instance, in the early Seventies, Puig contacted Max Factor in the hopes of representing the prestigious American makeup artist in Spain. It worked, with Puig becoming the distributor of Max Factor products, which had to be specially produced, for more than 15 years.

“That is how I learned what it means to be a multinational company, and I learned manufacturing and marketing techniques that were very useful to us,” Puig said. “Spain was small and closed, and that made me think about what we wanted to do and be.”

The Puig family never deliberately tried to eliminate its competition, but comprehended the need to place its bets outside of Spain in order to flourish.

Mariano Puig also understood how important it was to bring in outside directors, such as Javier Cano, who became the first non-family president of Puig in 2001.

“We began to ask other families and to consult with experts on family companies,” he explained. “We didn’t want to remain at the helm. We loved the company so much that its continuity was more important than preserving our positions, and we began a process of stepping away from power, something which is not easy to do.”

“After devoting my entire life to this company, I could never have imagined what Marc has achieved with the team that he has assembled,” said Mariano Puig.

A large gathering was held in July 2008 to pay homage to the executive and his three brothers.

“What does a family offer a company?” asked Puig. “First, commitment: Over the course of its history this company has gone through difficult times, and if we had everyone’s trust, it is because the family was completely involved. Second, ethics like the culture of effort and the value of merit.

“Third, long-range vision,” he continued. “Many of our values were instilled in us as children: the pursuit of excellence, the sense of personal and social responsibility, which translates into a company where decisions are made with a long view, unlike a company traded on the stock market. When things have gone badly for us, we didn’t want to harm the brands by diminishing investment. This is long-term thinking.”