Dedivanovic will launch the brand at Sephora, where he began his career 20 years ago.

Two years ago, the famed makeup artist told WWD he would one day launch a line of his own. Much has changed since 2018, but Dedivanovic’s persistence has been a constant.

On Oct. 1, Makeup by Mario, Dedivanovic’s first beauty brand, bows direct-to-consumer and at Sephora with a 21-sku collection of eye makeup products. The range was created for cosmetics enthusiasts of all levels, from casual Sephora shoppers to professional makeup artists, and the initial lineup is a nod to Dedivanovic’s signature technique. Those who know his work know he always begins makeup with the eyes.

What’s not immediately apparent is the inspiration for the line. Speaking to WWD via Zoom, Dedivanovic said he was influenced by the colors of human flesh, arteries and organs.

“I wanted a brand that is completely universal, especially in this first collection, [so] that all of my clients would be able to use it — and my followers,” Dedivanovic said. “I started to research and study the shades within the human body. We all have the same shades, no matter where you’re from, [and] surprisingly enough, we don’t have a lot of shades within our bodies. Not to sound morbid, but basically to show that [the collection] is truly universal and comes from within us.” 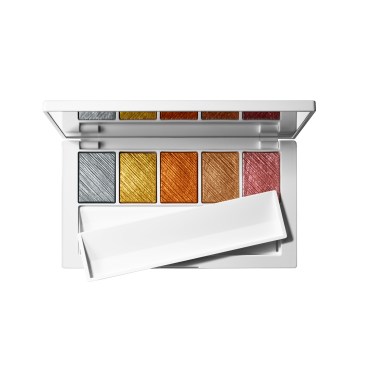 The products are thoughtfully crafted from utility to aesthetic to composition. Dedivanovic worked with creative director Fabien Baron of Baron & Baron on the design. The palette sizes stand in contrast to the recent trend of oversize palettes with dozens of shades. Makeup by Mario’s palettes are about the size of an iPhone, meant to fit in the palm of one’s hand.

“It’s unnecessary to have a big palette. Palettes expire,” Dedivanovic said. “For me, eyeshadows should be smaller and not weigh a lot. I travel for a living, so I need things that are easy to clean. Also, you get the true color of the product against white. When you go to a studio to shoot, everything’s white because you’re able to be more inspired against the white backdrop. I wanted to bring that into the line as well.”

In addition to the human body, Dedivanovic was inspired by crystals and native metals.

“I manifest into crystals a lot,” he said.

The Master Metals palette comes with a spatula and removable “mixing well” in which users can mix the shades with a separately sold enhancing liquid. A detail-oriented teacher at heart, Dedivanovic demonstrated this process to WWD via Zoom using a high-definition camera.

The choice to bring Makeup by Mario exclusively to Sephora was a no-brainer for Dedivanovic, who began his makeup career at the retailer as a beauty adviser in Manhattan 20 years ago.

“Before I went to Sephora and walked into that store accidentally, I was an extremely closeted young man who was desperate to go to Manhattan and find people like me,” he said. “When I walked into Sephora, my life changed. I discovered beauty, and I found my true calling — the first time I found my talent and my passion. I was making, I don’t know, seven or eight dollars an hour 20 years ago. And exactly 20 years later, on that date, I’m launching in North America and Canada [in] all stores.” 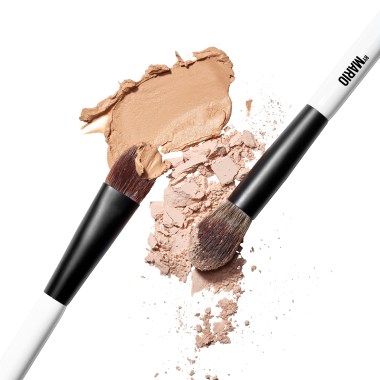 Last year, Dedivanovic launched a set of 13 makeup brushes at Sephora. The collection sold out in a matter of hours, according to Artemis Patrick, Sephora’s executive vice president and global chief merchandising officer.

“Over his 20-year career, Mario has emerged as an incredibly influential figure in beauty, particularly in the world of artistry and makeup education,” Patrick said via e-mail. “Though clients are not necessarily venturing out as often for social occasions, we’ve seen a continued demand for our artistry brands, as fans are using this extended time at home to experiment with products and beauty looks.”

In building the Makeup by Mario team, Dedivanovic brought on Alicia Valencia as the company’s global president. Valencia is a beauty industry veteran with 25 years of experience at brands such as Bobbi Brown and Pat McGrath.

“I was touched by [Dedivanovic’s] passion for education and his desire to share his craft,” Valencia told WWD via Zoom. “That’s something that is so lost in the industry right now. There are few makeup artists that care about the community as much as he does.”

Makeup by Mario is self-funded by Dedivanovic and a family member. He initially approached investors, but ultimately decided not to take on investment “because I didn’t want my infrastructure to be tainted,” he said.

“I invested everything I had into this and that was scary,” he said. “I went through this process of people trying to become a part of [the company], but I was adamant that I didn’t want anyone to have a say. I wanted to be able to do what I want to do as an artist.”

Dedivanovic is already planning launches for 2023 — expect foundations and powders — and is creating products inspired by his nearly 8 million Instagram followers, some of whom have paid to attend his Master Class. Due to COVID-19, Dedivanovic’s Master Class series has been postponed, though he is researching ways to hold a digital version of the same caliber as his in-person ones.

“I had a lot of things planned for the year and all of it stopped because these events have hundreds of people in them,” he said. His Master Class Albania installment once drew 2,200 people.

“The in-person event has a massive, 50-foot screen, so the quality of what I’m doing is high quality,” he said.

He has continued to do makeup during the coronavirus quarantine, but that has slowed as he and his clients are no longer traveling for press junkets, photo shoots and events.

“It’s going to come back little by little,” Dedivanovic said. “I don’t think any of this is permanent. It’s a tough spot we’re hitting, but we’ll overcome it and things will start to get back to normal.”

The Best Hair and Makeup From NYFW Spring 2021