Maya Njie and Her Art of Fragrance

The self-taught perfumer works in a multisensorial fashion.

Maya Njie didn’t have the job of perfumer in mind while growing up in the industrial town of Västeras, about an hour outside of Stockholm. But she was sensitive to scent.

Njie has a vivid memory of smelling CK Be for the first time, before moving to London at the age of 19.

“I remember where I was, who was wearing it,” she said. “I remember coming into the room, and I was just blown away. I knew I had to have it and saved up. When I moved to London, my mom had some money put aside for my first deposit and stuff. The first thing I did was go out and buy one of those bottles.

“It kind of set the tone,” continued Njie. “When I think about my first two, three years in London, I wore that fragrance.”

The self-taught perfumer, still based in London, often revisits the link between fragrance and memories. Yet she started out as a visual artist.

“Whilst I was there, I took inspiration from my old family photographs a lot,” she said. “I’m half Swedish, half Gambian, and I have this old photo album of pictures of my family before I was born.

“It tells a traditional Scandinavian story, but with an African influence in there,” continued Njie, who would visit Gambia every few years when she was a girl. “I’ve always been really drawn in by the ’60s and ’70s fashion, and decided to try and tell that story through my designs. Then I started wondering about if I could also tell an olfactory story alongside it. That’s how I started to experiment.”

For her first scent, Nordic Cedar, from early 2016, she had in mind a photograph of her older sister as a child with three women outside the tiny allotment summerhouse the family had.

“It’s that feeling of being surrounded by the forests,” reminisced Njie, who mixed notes of cardamom (often used in Swedish baking), cedar wood and patchouli — among her favorite olfactive notes. “So it encapsulates a lot for me in terms of the Scandinavian wilderness and my upbringing.”

Her second fragrance riffs on a snap of a family celebratory gathering, but this time with an indoor element.

“I experimented with vanilla as a note,” she said. “I thought it fitted really well with the photograph and the palette, because all of a sudden it goes from primary colors into something more kind of pastelly and warm. It changed the [Nordic Cedar] formula completely. 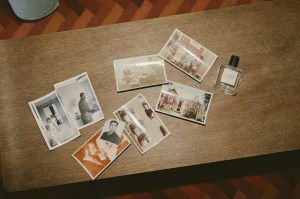 ‘Then from that I worked with an inspiration from my grandfather’s apartment, a picture of him and my sister,” Njie said. “It’s kind of brown and beige in its tones.”

Njie’s grandfather was a stoker and smoked a pipe. So she called the scent, with tobacco leaf and vetiver notes, Tobak.

Her fourth scent is Les Fleurs (“it’s really bright green, lush”) and the fifth one, Tropica (“very much a kind of sunscreen smell”), is based on her memory of going on holiday to tropical Gambia, when Sweden was cold in the wintertime.

The genderless fragrances are sold internationally, including at Liberty, The Conran Shop and Alex Eagle Studio in the U.K.; Sniph in Sweden; Parfums Uniques in Germany, and Mr Postman Store in Romania. Muse Experiences and Tigerlily Perfumery carry Njie’s scents in the U.S., and Nose Shop does in Japan.

Njie’s other creations nod to various things, like a song.

“Music I find really inspiring,” she said, adding that can be all types. “Sometimes it’s characters from something I’ve watched. It could be an imaginary person. Sometimes it’s people that I see on the street. I can get inspired by somebody’s style, and it makes me want to create something for them.”

Njie enjoys snapping documentary-style shots with her Nikon, although hasn’t been in a darkroom for a couple of years now. She color picks photos, like on her Instagram page, which includes some vintage car and van imagery.

“I’d like to be able to express fragrance in multiple ways,” she said. One example is a project for 2022 that involves expressing one’s own take on an old building through scent.

Or it could entail working with other visual artists, such as those in film or fashion.

“I like the combination of paper and scent,” she said. “So I’m at the moment looking at different technologies within that. I am having my fragrance translated into ink.”

In collaboration with Scent Trunk, Njie conceived a perfume after being given three elements to work with: the month of November, tree moss as the key note and a place — Pelister Park in Macedonia.

“Scent can be so much more than beauty,” Njie said.

Favorite object: A hand-blown [citrus yellow] glass. There is this glass blower called Michael Ruh, and he makes these amazing things. His colors are incredible. I’ve been keeping my eye on him for a long time.

Favorite color: I love many colors, but I would say maybe green — like a dark forest green or an Army green. It’s a color that I’ve been wearing since I was young. It makes me feel safe and comfortable.

Favorite podcast: Dear Joan and Jericha. It’s a comedy podcast written by two female comedians, and it just makes me laugh. They’re very rude, but also talk about all these stupid things in society that they can’t believe still exist, but do.

A favorite artist: Jamil Shabazz, the photographer. I feel really inspired by his work, and he covers quite a few decades — the ’70s, ’80s and ’90s — in New York. I always feel something when I look at his photographs. I can really get lost in his world.

I also really like architecture [such as Ricardo Bofill’s]. That’s another area I like to get lost in.

The Art of Hair: Redefined by Charlie Le Mindu

Through the Unique Lens of Harley Weir