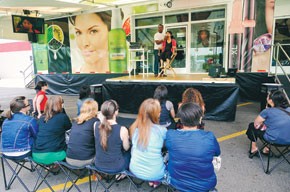 SECAUCUS, N.J. — Two women are being made over by a professional makeup artist. It’s a scene most likely to be found at Bloomingdale’s or Sephora.

This story first appeared in the June 20, 2008 issue of WWD. Subscribe Today.

In this case it is at Wal-Mart.

Similar makeovers have been performed at stores ranging from Longs Drug Stores to Rite Aid as part of Maybelline New York and Garnier Nutritioniste’s The Great Beauty Tour. On this day, the mobile educational experience is parked near a bustling Wal-Mart after making stops in the South and Southwest.

“We all assume consumers know how to do their own makeup,” said Stephanie A. Rinaldi, vice president, multiethnic marketing and promotions, Maybelline New York. “But when we are out meeting with consumers, we find they have questions, such as how to use four-pan eye shadows or how to take care of their skin. We thought it might be fun to have a tour where we take the experts out to the shoppers.”

The Great Beauty Tour, the first of its kind for Maybelline and Garnier, stops at major retailers, events and local festivals across the country. The “tour” consists of a tractor trailer loaded with products and makeup stations. Three experts — headed by Charles Hezekia, best known for working with Oprah, “Movie and a Makeover” and “The Martha Stewart Show” — perform a demonstration on a stage for attendees and then conduct mini one-on-ones. On this day, Hezekia liberally uses Maybelline New York Mineral Power makeup, Volume XL Seduction Lip and a new mascara called the Colossal Volum’ Express Mascara. Inside the truck, experts Isaac Beal and Angie Waldner teach two women about taking care of their skin, especially how to remove makeup. Participants appear very pleased with the experience and the chance to have makeovers that would cost a fortune at department stores.

Hezekia said most people want advice on how to make beauty easy and many focus on three areas — eyes, lips and skin. “What is in now is having healthy skin show through your makeup,” he said. Many of the women want to know more about skin care, he noticed. As for eyes and lips, he demonstrated how to make lashes longer while making lips plumper. “Pretty lips are coming in for fall and we show how to achieve that,” he said.

Those in attendance received samples and coupons. Rinaldi said it is too early to see results of the couponing activity, but stores have seen shoppers come in to look for what the experts used. Also, this bustling Wal-Mart just outside of Manhattan featured several Maybelline items on endcap displays. This location also made it easy for New York-based Maybelline and Garnier executives to come view the power of the tour.

“Mass market retailers, mostly, don’t have beauty advisers,” explained Rinaldi. Those retailers with consultants added that often the staff has to accomplish other tasks that reduce their one-on-one time. The tour helps bring experts to the retail environment as well as outdoor gatherings.

Shoppers were alerted to the tour via local publicity and the maybelline.com Web site. In total, the tour hit 10 major community events and 50 retail locales. Rinaldi said she hopes to keep the tour rolling next year. “It has been such a great experience we want to do it again. It was welcomed by our retailers and consumers.”