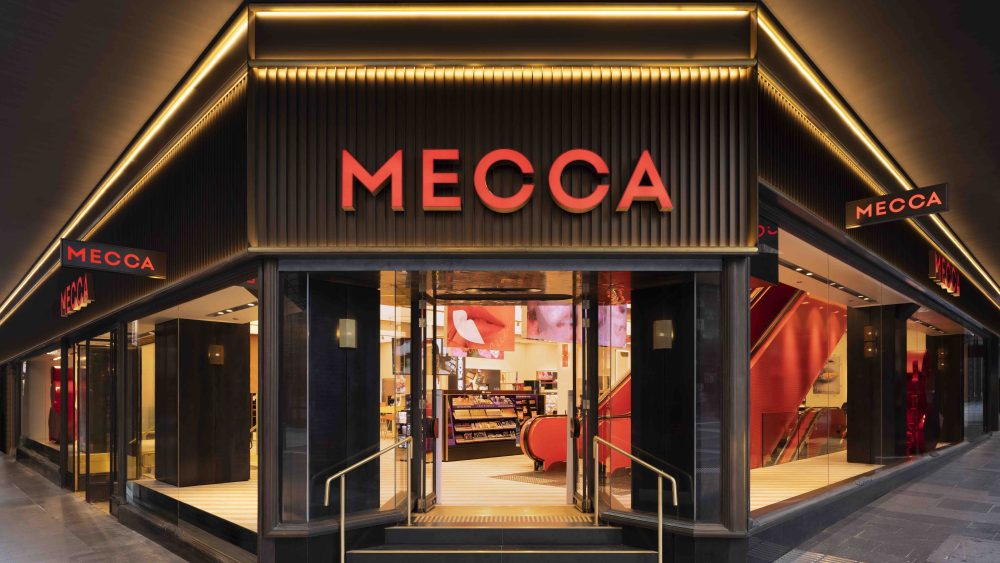 SYDNEY — Melbourne-based Mecca Brands has celebrated its emergence from one of the world’s longest COVID-19 lockdowns by throwing open the doors of its most ambitious door to date: a four-story, 1,800-square-meter store on the corner of Market and George Streets in Sydney.

Billed by the company as the largest and most immersive beauty store in the Southern Hemisphere, with over 200 points of innovation, the new Sydney store — which opened on Black Friday and is located in the 91-year-old, heritage-listed Gowings building — is more than double the size of Mecca’s next biggest location at Melbourne’s Highpoint Shopping Centre.

Rising up through the center of each floor is what Mecca is calling a “Wonka-esque beauty chute.” A 20 meter x 600 centimeter x 600 centimeter neon yellow and clear glass dumb waiter that Mecca’s interior architect Meacham Nockles has incorporated into the theater of the store design, the tube transports product in a bright red box from the 400-square-meter basement through to the 1,400-square-meter of retail over three floors above.

“We asked ourselves if we were to push this beauty journey as far as conceivably possible what would that look like?” she said. “The first thing is, customers want a curated range of brands, so we’ve tried to bring brands to life in exciting and interesting ways. Two, customers want to be shown how to use these products, so we’ve really doubled down on the experiential side of beauty.”

Over a third of the space is dedicated to services, with three private services rooms on Level 1 and more treatment beds in the Lower Ground luxury skin-care space.

Building on from the Mecca Beauty Lab concept, which launched in 2018 offering one-on-one 15-minute appointments and group workshops, the flagship is the first Mecca store to have its own dedicated Skin Lab, as well as a color-specific Makeup Lab. There are also areas for nails and brows, plus the company’s largest perfumeria and a dedicated gift-wrapping bar.

Digital content creation was a key consideration in the store design.

The Beauty and Skin Labs are equipped with cameras, to capture sessions being hosted by influencers and Mecca’s own experts, to be livestreamed to Mecca’s other stores.

Originally intended as a minor component of the new store’s concierge desk, due to the events of 2020 the company’s Virtual Services program was upgraded to its own 20-meter hub on the ground floor.

Customers go online to book a 15-to-45-minute FaceTime appointment with a Mecca team member, who walks and talks them through the products.

Noted Horgan, “You will be able to have the full experience of this space virtually and the only reason that we’re in the position to do this so seamlessly — and it will be seamless — is because we have been practicing this through COVID-19”.

Originally, in fact due to be unveiled in the new Sydney flagship, Mecca’s Virtual Services were fast-tracked to launch on March 27, three days before all Mecca stores shuttered during Australia’s initial five-week national lockdown. The services were operated by team members working out of 12 designated “light, dark” Mecca stores.

Virtual hosting — where customers chat live to a team member in a nearby store in real time via a pop-up chat box on mecca.com.au — launched on May 12.

In early July, a second, far more draconian lockdown was imposed on all of metropolitan Melbourne due to a resurgence of the coronavirus in the state of Victoria, impacting 24 Mecca stores. The lockdown lasted for four months. As before, 12 of the shuttered stores served as Virtual Services hubs.

“They [Mecca’s Melbourne stores] were all totally closed, with team members inside and the fact that we were able to keep all of our permanent and permanent part-time team members operating in that environment is testament to how much did change in that six months or even that four months” said Horgan.

At time of writing, Australia has recorded 27,867 cases of the coronavirus and 907 deaths, 90 percent of which occurred in Victoria.

The new virtual initiatives have driven significant business for Mecca, with the e-commerce boost helping amortize the hit taken by the temporary closure of stores, according to the company. Mecca reports it has experienced triple-digit growth of its online channels year-on-year with all metrics elevated, from traffic to conversion to average transaction value.

When stores reopened after both lockdowns, customers came “flocking back,” said Horgan, who declined to discuss the sales impact of COVID-19, but nevertheless confirmed that while the company did participate in the initial six-month phase of the Australian federal government’s 102.2 billion Australian dollars or $75 billion at current exchange JobKeeper wage subsidy program, which commenced in March, it did not qualify for the program’s six-month extension which commenced on Sept. 28.

As before, in order to qualify, companies with less than 1 billion Australian dollars had to demonstrate a reduction in revenue of at least 30 percent in a nominated period compared to the previous year — in the case of the first tranche of the program’s second phase, over the July-September quarter.

In all, it’s been a busy year for Mecca. In August, Mecca made its first foray into China via a Tmall Global flagship. After a slow start, Horgan said that by the end of year one she expects its sales will represent the equivalent of one of Mecca’s larger stores.

Although not currently offered by the mecca.com.au web site, international shipping is on the cards — with the new Sydney flagship potentially playing a key role here.

“I’m hoping that this flagship will be at the cutting edge of what is sometimes coined as ‘phygital.’ It’s certainly been designed to be so,” said Horgan.

“We had ideas prior to COVID-19 of how we could further integrate the physical and digital, but COVID-19 has absolutely accelerated this and the fact that all of the services that we’re doing will be available digitally, that any customer anywhere around the world can have a virtual shopping experience in our flagship, I think that says a lot.”