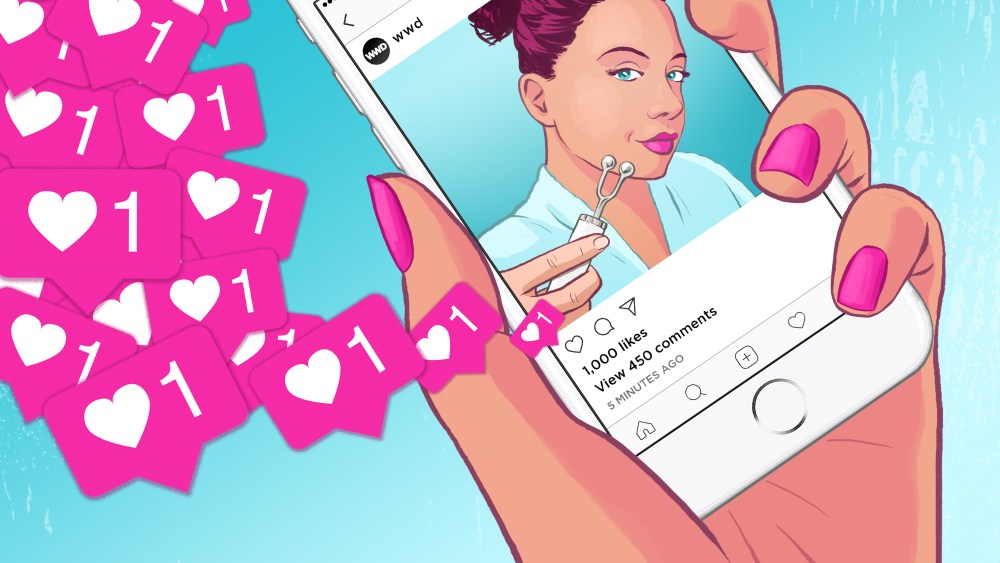 The selfie generation is obsessed with their looks — and they’re working hard to preserve them as they move through their 20s.

While many Millennials are fighting Mother Nature with Botox and fillers, the entire age group hasn’t been driven to the needle — yet. Instead, they’re taking a more proactive approach to antiaging than their parents. For a consumer group obsessed with superfoods and SoulCycle, preventative antiaging is seen as an intrinsic part of overall health maintenance. Scheduling a facial is as important as — or even more than — a dentist’s appointment.

A demand for non-invasive aesthetic procedures with little to no downtime and near-instant results offering a “you-but-better” look has contributed to a resurgence in the popularity of time-tested antiaging treatments such as microcurrent, microneedling and chemical peels. They have reemerged as a midpoint between two extremes — Botox and fillers and less efficacious home devices — and are driving Millennials to the dermatologist’s office, aesthetician and quick service bars in droves.

“The biggest change I’ve seen in the last few years is that the procedures I do are accepted as a part of overall wellness,” said Dr. Paul Jarrod Frank, a New York cosmetic dermatologist. “It’s not this idea that only ladies who lunch go to doctors like me.”

Frank specializes in cosmetic procedures and noted he has seen a sharp uptick in patients purchasing LED light, skin tightening and radio frequency treatments, which licensed aestheticians perform in his newly opened PfrankMD Skin Salon across the hall from his Manhattan office. Noting the popularity of these non-invasive procedures that don’t require his direct oversight — such as administering a face reshaping filler would — Frank has plans to expand his Salon concept throughout the city, the Tristate area and Miami.

“My average cosmetic consultation has become much younger — by about eight years — since I opened my practice nine years ago,” said Dr. Dendy Engelman, a cosmetic dermatologist on Manhattan’s East Side. “They’re hyper-conscious of things that before were kind of neglected. I don’t have to preach to them forever about sunscreen — not from a cancer perspective, but from an aging perspective. They still don’t think they’re ever going to get cancer, but they understand they’re going to age and get wrinkles.”

Millennials are undeterred by the possibility of pain; after all, when their favorite celebrities are posting on social media about the latest treatments they’re getting, it can’t be that bad.

“There’s been a huge uptick in younger clients,” said Dr. Whitney Bowe, a dermatologist in New York. “They’re less afraid of technology and using lasers and devices to prevent signs of aging. The older generation waited until things got bad.”

Bowe said “the hottest procedure” at her practice is the “vampire facial,” popularized in 2014 when Kim Kardashian posted a photo of herself getting one on social media. The vampire facial is a form of microneedling — tiny needles that puncture holes into the skin, creating wounds that force collagen into overdrive to regenerate and stimulate healing, using one’s own plasma.

Another popular new procedure, according to Bowe, is the EndyMed Intensif, a combination of microneedling and radio frequency. “It smooths out the texture of the skin but it also tightens,” said Bowe. “It’s a two-in-one procedure with little downtime, and you can wear makeup right afterwards. [Patients] are coming in for multiple procedures at once; they don’t want to take time away from their work schedule and the gym.”

Engelman noted that her younger patients are opting for glycolic peels and galvanic current, a low-voltage electrical current that administers little shocks to the face that stimulate facial muscles, enhance collagen production and improve circulation. “If the scaffolding is tightened, the skin will look better,” said Engelman. “It’s very addicting because you immediately look better after treatment.”

That desire for instant gratification is driving younger consumers to enhance their glow with pricy facialists, where treatment options have become significantly more advanced in recent years.

“The old European facial has its place, but it’s not good enough anymore,” said Marius Morariu, cofounder and copresident of Tracie Martyn, a spa in New York known for Martyn’s use of LED lights, radio frequency and microcurrent technologies. “You can actually look younger now in an hour.” Martyn’s signature red-carpet facial, a combination of LED light therapy and radio frequency, is priced at $450 for an hour, but 20-minute LED facials are also available for $125 each.

“We have a lot of young women in their early 20s coming in for regular facials with oxygen and being given a treatment plan,” said Joanna Vargas, a New York facialist who also operates a spa in Los Angeles. “They’re very organized and want to do radio frequency and microcurrent and all are about doing something preventative in a non-invasive way.” Vargas’ treatments start at $175 for oxygen facials, but can go up to $550 for her signature triple-crown treatment — a combination of oxygen, microcurrent and microdermabrasion.

The beauty industry has spent the past year lamenting the failure of Millennials to spend on traditional antiaging creams their parents bought in the department store. But experts say the age group does care about their skin — and they’re willing to spend money on treatments to take care of it, as they would on healthy eating or exercise.

“My younger patients always say, ‘I don’t want to age like my mom or my dad. Why wouldn’t I take better care of my skin now? I might as well invest,’” said Dr. Ellen Marmur, a Park Avenue dermatologist, who recently opened a second Park Avenue location of her practice called MM2, complete with “Brooklyn-inspired industrial decor” to appeal to her influx of new clients. Marmur administers medical-grade skin-care masks said to penetrate the skin deeper than a mask one can buy at Sephora. She does these treatments either separately or as add-ons to procedures, and plans to expand into her own line of products.

Marmur’s product launch would be ironic given that Millennials are known for not spending on antiaging — except when it comes to the professional skin-care category, that is. Though prestige skin-care sales have been sluggish for the past several years, one area of growth is in the professional skin-care category — the other is in naturals. According to a skin-care report from The NPD Group Inc. last year, Millennials are more likely to buy products that have been endorsed by doctors. Earlier this year, One Click Retail listed a report stating that Amazon’s “derma skin care,” or professional skin care, grew 262 percent year-over-year, making it the fastest-growing beauty category with the retailer.

Young consumers are also using antiaging treatments as a way to get the most out their injections, if they do get them, said facialist Georgia Louise of Georgia Louise Atelier in Manhattan. “I don’t do lasers and injectables, but I’m the middle place where they can get really good non-invasive machines, a good collection of antiaging and tightening treatments. They can get results, and don’t have to go to the dermatologist so frequently…it makes their work easier. It’s cleaner, brighter and the Botox and fillers are working better,” said Louise, who noted her Millennial clients often see her in between Botox injections, hoping to stretch the results before the next round.

And though they’re willing to spend money on skin-care treatments, Millennials are a picky group and do their homework.

“Today’s Millennial consumer wants to see results and they’re willing to spend money. And they’re celebrity-influenced — they see something on Goop and run out and buy it because it’s trending. They tend to be more frugal in that they will spend money, but they want to get it right.” said Wendy Lewis, president of Wendy Lewis & Co., a global aesthetics consultancy.

Some of that money is being spent on chemical peels, which grew 4 percent from 2015 to 2016 to $1.4 billion, according to the American Society of Plastic Surgeons.

For PCA Skin, a brand that makes both professional-grade peels for in-office use and consumer-facing products, this uptick is a boon for business. According to data from Kline & Co., PCA Skin has the second-fastest growth rate in the professional skin-care category. “A lot of that has to do with the resurgence of the chemical peel,” said Danae Markland, PCA Skin’s vice president of business development. “Patients come to us seeking out a service, and they don’t necessarily connect the dots to quality corrective products until they’re in that [doctor’s office] space .”

Other skin-care brands are seeing high sales conversions of product after customers buy facials with them. One of these brands is Elemis, the U.K.-based spa skin-care line. Elemis last year launched its Superfood Facial Oil alongside a Superfood Facial treatment, and the Biotec range to go along with the Biotec facials, which involve various technologies, including galvanic current, ultrasonic resurfacing, LED therapy and oxygen infusion. Elemis cofounder and managing director Noella Gabriel noted that the brand sells about four to five retail products for every facial service purchased. In London, the brand transformed its flagship spa to house a “speed spa” in the basement for quick services for on-the-go Millennials.

Some brands are going beyond the spa to offer services at retail as a way to get shoppers to buy more skin care. Dermalogica chief executive officer Aurelian Lis is bullish on services at retail. Last year, the brand launched Face Fit in its 900 U.S. doors and in some international markets. Face Fit is a series of fast, in-store facials timed with product launches. Lis noted the brand sees about a 25 percent increase in market size in each market it enters with Face Fit — the facials start at $10 each, and Lis said customers are likely to buy more product with the facial. “In many channels, we’re seeing two-thirds of Face Fit customers being new to Dermalogica, so we’re getting both a [bigger] basket size and winning new customers.”

Quick services are also popping up in dedicated facial bars along the coasts — Face Place, a Los Angeles-based no-frills facial bar that has been around for decades and touts lower prices than one would find in a spa, launched in New York last year within the Sally Hershberger Salon. A facial goes for $160. Skin Laundry is another rapidly growing example, offering up 15-minute intense pulse light and laser treatments for $65 a session. The brand launched in 2011 and has opened up 14 stores in the U.S., U.K. and Hong Kong, and has plans for more this year.

Cindy Kim, a cofounder of South Korean beauty emporium Peach & Lily, opened Silver Mirror facial bar on the Upper East Side last year. Sensing a future trend, her goal was to bring the South Korean skin-care philosophy of regular facials at affordable prices to the U.S.

“America has been so far behind,” said Kim. “We’re a makeup-obsessed culture, but people are looking for skin care to become more accessible. Here, there’s Sephora, where you’re not learning about your skin or how to take care of it, you’re buying product to slap on your face and hope it does something.”

Close to a year after opening, Kim has been pleasantly surprised by her customers — many of them twentysomethings — who are returning for facials ranging from $80 for 30 minutes to $135 for 50 minutes. Kim’s facials include all the bells and whistles, such as microcurrent, high frequency, LED lights and oxygen. “We went into this knowing the market might not be quite ready, but the majority of our customers come back every three to eight weeks,” said Kim. “It’s the wellness culture — people are starting to understand that makeup looks better on a clearer face.”