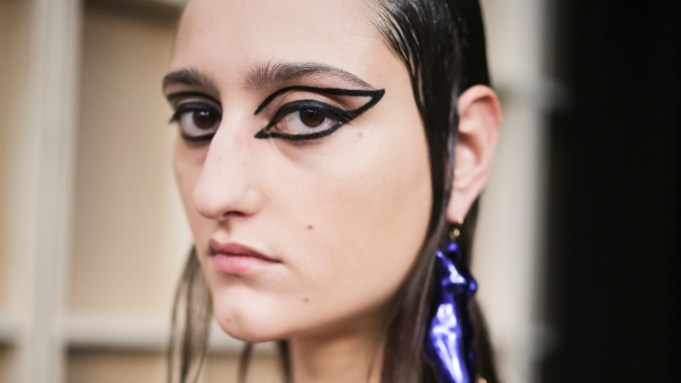 Eyes were the primary makeup focus at Milan Fashion Week, where four leading female makeup artists each put their own unique spin on the trend. Here, a look at the bold looks created by Pat McGrath, Lucia Pieroni, Linda Cantello and Lynsey Alexander.

Boring is never an option for Pat McGrath, who took inspiration from some of history’s strongest women this season. At Prada, lashes were her obsession. She applied mascara liberally and multiple times to create a makeup focusing on “iconic, superthick, superlong lashes,” further exaggerating the effect by drawing their shadow on the lids and under the eyes with a grayish-toned pencil for an overall look that winked at Twiggy in the Sixties. At Versace and Marni, McGrath riffed on Cleopatra’s signature cat-eye shape, opting for a full-glamour, Eighties-inspired version at the former, and an eccentric, double-lined black cat-eye at the latter.

Lucia Pieroni worked a naturally perfect look in Milan. At Salvatore Ferragamo, her sole focus was on curling the lashes and applying mascara to get a basic yet intense gaze, while at Roberto Cavalli she created a radiant look using RMS Beauty’s Utopia Eye Polish on the lids, then curling the lashes and carefully defining the eyebrows with Anastasia Beverly Hills and MAC Cosmetics pencils.

Giorgio Armani’s international makeup artist Linda Cantello debuted the Eyes to Killer Stellar product to serve to her purpose of creating a pink, shimmering halo around models’ eyes. Hitting the market this month and available in six hues, the launch is a highly pigmented gel that Cantello tapped and smudged on the lids to give an iridescent — almost liquid — feel to the color. “There’s a lot of pink in the collection,” she said, “so I wanted to make it romantic but still strong.”

Lynsey Alexander conceived a “Nineties, futuristic makeup” with iridescent and reflective textures at Missoni. Inspired by the collection’s color palette and using MAC products, she created custom-made metallic eye shadows in four different pastel tones — green, purple, blue and silver. Applied in the inner corner of the eyes to create two “C” shapes, each layered look comprised a base of a stick, then was topped with a shimmery eye shadow in the same shade and MAC Reflex Pearl on top of that. “It looks very simple but there are a lot of steps to it, and every color is different,” Alexander said.