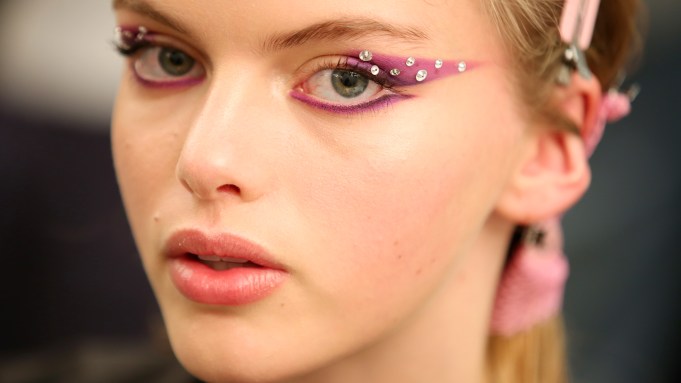 Natural, flowing hair had a moment on the runways in Milan for fall.

At Tommy Hilfiger, Eugene Souleiman said he wanted to create “hair with a natural texture,” keeping in mind the fashion brand’s young core consumers. Here, long hair was mostly parted in the center with free-flowing tresses.

Over at MSGM, hair was styled by Anthony Turner, who celebrated the individuality of each model walking the show. He explained the aim was to bring their hair back to life and celebrate its particularities. So textures were left au naturel except on a handful of models, for whom it was pulled back with a simple headband.

At Etro, James Pecis went with free-flowing hair, too, saying he gleaned inspiration from the idea of “a woman traveling on a horse to the desert in the Seventies.” The hairstylist applied oil to keep tresses away from models’ faces as they made their way down the catwalk.

Loose hair was also noted on the runways at Gucci and Salvatore Ferragamo.

Peter Philips said he was inspired by the sophisticated Fendi woman while creating the makeup look for the fashion brand’s show. He illuminated models’ faces with dashes of white cream applied from the inside corners of their eyes to their noses.

Prada’s show, meanwhile, was a tale of two beauty looks — bold makeup with sparkly eyes on the one hand and a natural, fresh take on the other. The inspiration overall was a fresh, very modern feeling, “but then we played with graphic shapes,” explained Pat McGrath. Those were created with crystals applied around eyes in bold colors such as green, blue and pink on a handful of models.

At Antonio Marras, Tom Pecheux said: “It’s all about the eyes – they give a bold and powerful feeling with a romantic twist.” There was not one look created for the show, but rather they ranged from red vivid eye shadow swept along lids to the eyebrows to red wings and black-rimmed peepers.

Other shows having the eyes in focus included Emporio Armani, Max Mara and Ujoh.