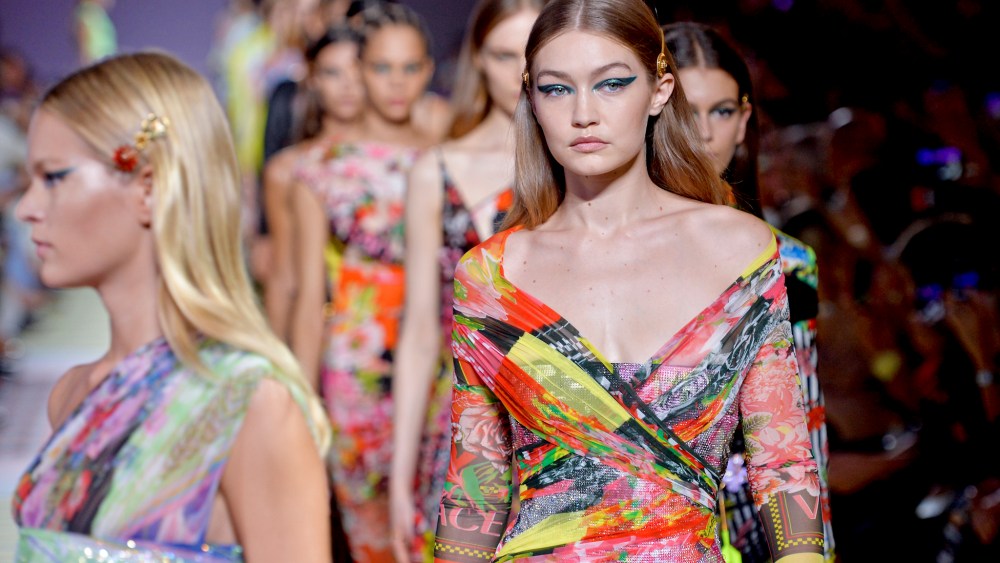 MILAN — Leave bold lipsticks and complex contouring procedures in 2018 and start getting armed with tons of mascara, shimmering eye shadows and eyeliners for summer 2019.

POWER TO LASHES: Lashes were key on the runways at Prada, Salvatore Ferragamo and Etro, which offered different takes on the theme. Pat McGrath applied mascara liberally and multiple times backstage at Prada to create “iconic, superthick, superlong lashes.” She further exaggerated the effect by drawing their shadow on the lids and under the eyes with a grayish toned pencil, for an overall look that winked at the Sixties. Lucia Pieroni opted for a more basic approach at Salvatore Ferragamo, where she focused solely on curling the lashes and applying mascara. This product also proved to be the obsession of makeup artist Mark Carrasquillo at Etro, where bottles of MAC Cosmetics Haute & Naughty Lash mascara were emptied on models’ top and bottom lashes to create a “black and clumpy” effect nodding to the collection’s surfer girl muse who “just got out of the ocean.”

SHINE BRIGHT: Shimmering eye shadows and glittery products abounded on the lids of models strutting many catwalks, including Missoni, Giorgio Armani and Antonio Marras, among others. At Missoni, makeup artist Lynsey Alexander translated the trend in a “Nineties, futuristic makeup” with iridescent and reflective textures. Inspired by the collection’s color palette and using MAC Cosmetics products, she created custom-made metallic eye shadows in four different pastel tones — green, purple, blue and silver. Applied in the inner corner of the eyes to create two “C” shapes, each layered eye shadow comprised a base of MAC stick tone, shimmery eye shadow in the same shade and the MAC Reflex Pearl applied both with fingers and a flat Mykitco brush. Giorgio Armani‘s international makeup artist Linda Cantello debuted the Eyes to Killer Stellar product to help create a pink, shimmering halo around models’ eyes. Hitting the market in October and available in six hues, the launch is a high-pigmented gel that Cantello tapped and smudged on the lids to give an iridescent — almost liquid — feel to the creamy color she formerly applied on the eye. At Antonio Marras, Tom Pecheux also worked with newly launched MAC Cosmetics products to provide models with sand-hued gazes in theme with the collection’s African safari inspiration. In particular, The MAC Dazzleshadow Liquid Blinking Brilliant helped add a golden glittery effect to the eyes. Variations of the trend were spotted at the Max Mara and Moschino shows, which served shine with a natural and glamorous approach, respectively.

CLEOPATRA RELOADED: In a nod to the first diva who ever existed, creative reinterpretations of the cat-eye shape turned heads at the Versace, Marni and Marco de Vincenzo shows. Pat McGrath opted for a full-glamour, Eighties-inspired take on the trend, crafting a bold, superlong shape in metallic green for Versace. She further proved her artistry by drawing an eccentric, double-lined black cat-eye for Marni’s extravagant collection, while makeup artist Terry Barber went the opposite direction at Marco De Vincenzo, opting for a raw and minimal black line shaped using MAC Cosmetics’ Chromaline product.

Hair-wise, self-expression emerged as the prime trend of the Milanese shows, where many hairstylists avoided replicating the same look to all the models, but adjusted their vision on each head according to each hair type.

“It’s not individuality because they are the same tribe, but we’re working with each girl…with different textures and different hair types,” said Duffy ahead of the Roberto Cavalli show. His ultimate goal was to strip away the glamour, “making the girls way more street…more raw, more real.…This is the kind of girl you want to see walking down the street and girls want to look like,” he said.

“The inspiration is the girls, they are cast because of the way they look.…Everyone is different, this is the thing,” echoed hairstylist Eugene Souleiman backstage at Jil Sander, where he adapted his vision to each model’s head. Executed in different ways but all inspired by the show’s venue — a roofless factory with plants growing out of cracks in the tiled floors — the hair had “the strength of something very minimal with the softness of nature…at one point it was perfect and then a bit of moisture and a bit of sweat brought something else to the look,” he explained. At MSGM, Anthony Turner also kept each girl’s natural hair type, just creating a constant, a-day-old-grungy bed head “that feels like it’s been slept on” to interpret literally the “dreamer” theme of the fashion collection.