The line of mannequin heads and styling tools will be sold at Amazon, Walmart, Target and Sam's Club.

YouTuber and entrepreneur Mindy McKnight is bringing her beauty background to the toy market.

McKnight, creator of the YouTube channel CuteGirlsHairstyles and mother of twin-fluencers Brooklyn and Bailey McKnight, partnered with Maesa on a hair-care brand, Hairitage, that launched in nearly all Walmart doors in January. McKnight has since teamed with Jakks Pacific Inc. on a toy line of mannequin heads meant for children to play with to learn how to style hair.

The idea came from McKnight’s past experiences buying mannequin heads with which to practice new styles for her YouTube channel. Those mannequins, she said, were often overpriced; she wanted the Cute Girls Hairstyles toy line to be more affordable.

“Early on [after starting her YouTube channel], we could see the potential for toys, specifically mannequin heads,” McKnight told Beauty Inc via phone from her Dallas home. “As I was practicing my skills, I was buying mannequin heads and working on them so that I didn’t have to work on my kids’ hair all day long. My kids would play with them, and then they would learn how to do hair[styling].” 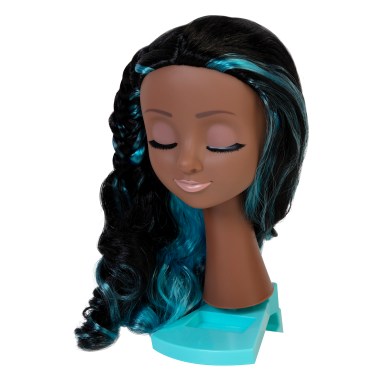 In a statement, Jamie Byrne, YouTube’s director of YouTube Creators, said creators are “next-generation media brands and should have varied and diverse revenue streams.”

Cute Girls Hairstyles toys will be sold on Amazon and in-stores and online at Walmart, Target and Sam’s Club. Prices range from $9.99 for a glitter brush to $19.99 for a jewel hair kit to $39.99 for a styling wig.

Amy Neben, partner at Select Management Group and McKnight’s manager, said the partnership with Jakks came about as McKnight “owns a large chunk of the seo [search engine optimization] as it relates to hair tutorials on girls” on YouTube.

Hairitage, McKnight and Maesa’s hair-care brand, is on track to do $30 million in retail sales this year despite the coronavirus pandemic, Neben said. The line will expand internationally and debut new categories in 2021.

“Since Mindy does own her audience online, we were not in the position of figuring out how to pivot to a digital marketing strategy as stores were closing,” Neben said. “The in-store element obviously was impacted by COVID-19, but we still maintained strong sales on e-comm.”

Asked how the pandemic has impacted her YouTube channel, McKnight said engagement is up, but overall ad spend is down. Influencers, she added, have also taken “a lot of heat” — an occurrence that seems to be the result of superinfluencers’ general struggle for relevancy and social media users’ increased time on platforms.

“TV production shut down, movie production shut down, so the only thing that people had to watch was whatever was on the Internet,” McKnight said. “I do feel like, because of that, [social media] was the most hate-driven, negative this year. People were so angry and taking that out on anybody they were around. My family and our channels managed to get through that. We tried to continue to bring the positivity back to the space and talk about uplifting things and family.”