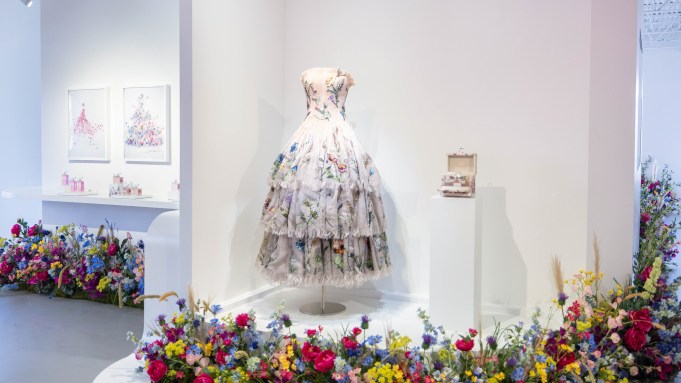 Miss Dior’s floral wonderland has been brought to life in Los Angeles.

Following stops in Japan, France and New York, the luxury French house unveils a pop-up with a mini exhibition Monday through Sunday at 8552 Melrose Avenue in celebration of its latest fragrance, out last summer.

“Miss Dior is more than just a juice,” said Laurent Kleitman, president and chief executive officer of LVMH Moët Hennessy Louis Vuitton-owned Parfums Christian Dior. “Miss Dior is the expression of love, the most romantic and the most joyful expression of joy as you could see in the evolution of the brand over time.”

Miss Dior has had several incarnations since it was created by Christian Dior in 1947, in honor of his sister.

“Miss Dior is probably the most iconic Dior perfume, because from the very, very beginning, Mr. Dior described himself as much as a couturier as a perfumer,” Kleitman continued. “And that’s very unique. He’s probably the only designer who was at the time, at the very beginning in 1947, declaring himself as a fashion designer and perfumer at the same time. And Miss Dior is, of course, the epitome of that.”

The scent represented hope for the couturier as the world was emerging out of World War II.

“That’s so resonating with the current world affairs…and the current state of the world,” added Kleitman, describing the messaging behind the fragrance today — conveyed by actress Natalie Portman, the face of Miss Dior since 2011, in the brand’s ad campaign.

“Natalie Portman is in fact asking us and calling, saying and ‘now wake up, wake up,’” continued Kleitman. “The world needs people to wake up. And we found that so resonating with the world in which we live, and the parallel between 1947 and 2021, 2022. The world in crisis needs people who actually see the world from a different angle, wake up. Wake up for beautiful things, wake up for peace, wake up for love, wake up for nature, a call to the best part in ourselves.”

The L.A. pop-up — filled with silk flowers of reds, pinks, yellows and blues — reimagines the Miss Dior universe with an ode to Grasse, France, where Dior cultivates its roses. The entrance features a made-for-Instagram mirrored room overflowing with bouquets as Portman’s commercial, as well as a video showcasing Grasse, plays on loop. There’s a beauty station, offering Dior cosmetics shade matching; an activation, spraying a bottled smell of Grasse and scent of the newest perfume; a display of Portman’s hand-pleated and embroidered “Millefiori” Dior dress, created by creative director Maria Grazia Chiuri (as seen in the Miss Dior 2021 campaign), and a French-style, complimentary café — with commissioned art by female artists, who were asked to interpret Miss Dior, shown throughout.

“Dior has such a legitimate and natural connection with the world of art, and this is why it’s much more than the relaunch of a scent, but it’s the rediscovery of the link between Mr. Dior and the arts,” Kleitman said of the exhibition element of the pop-up.

The reintroduction is “more contemporary, made fresher,” he added. The Miss Dior scent “has evolved over time.”

It’s “slightly more spicy,” explained François Demachy, the longtime in-house perfumer at Dior. He began with the centifolia, a fragrant rose with thin and delicate petals. “Depending on the time of day, it can have that spicy touch…and I added more fruity notes, essentially peach and apricot, to get that indulgent note.”

Parfums Christian Dior is “the fastest-growing brand in the top 10 in the U.S.,” according to Kleitman. And the new Miss Dior has done well for the house, he said: “Miss Dior [sales] has doubled between 2019 and 2021, with the relaunch that we’ve done. It’s a huge success. Year to date, after two months of sales in the U.S., it’s now ranking number three in fragrance in the U.S., which is absolutely stunning and unheard of for Miss Dior. So, it must be that we have touched something right.”

He attributes the rise in sales of Miss Dior to the brand’s sustainable efforts; adorned with its familiar bow (now more festive), each bottle is made with 30 percent less glass, with packaging redeveloped in sustainably harvested, FSC-certified paper. The message behind the fragrance, too, is a strong factor, he said.

“There is a statistic [that] is very interesting, that 50 percent of luxury beauty consumers would be ready to shift and abandon brands if they don’t believe the brand is carrying a purpose and a message beyond quality of products you would expect,” he went on, noting that Miss Dior has attracted a younger consumer, those aged below 30. Asia has been a key market, though the fragrance “has resonated” globally, in the U.S., Middle East and Europe.

“Dior is an experience,” Kleitman said. “What we do with Miss Dior, and as you see in the pop-up, is an experience. It’s multisensorial. It talks as much to the heart as to the mind.”