Mushrooms Are Becoming a Beauty and Wellness Ingredient Darling

“We are entering the new frontier, and we can just see from the numbers that the interest is growing. It's no longer a trendy, New York, L.A., metropolitan thing."

By Allison Collins and James Manso on April 9, 2021

Mushrooms are having a moment.

Mushroom ingredients are finding their way into skin care and supplements as the consumer quest for wellness endures. Beauty and wellness companies are increasingly tapping different types of mushrooms, including reishi, lion’s mane, turkey tail, chaga and others, for what experts say are their immunity, anti-inflammatory and energy-boosting benefits.

In skin care, search interest is concentrated around a few products. Origins Mega Mushroom line is the most searched, followed by Volition’s Snow Water Mushroom Serum and Tony Moly’s Golden Mushroom Sleeping Mask, according to Spate.

“Mushroom supplements are predicted to continue growing strongly in search interest in the next 12 months, and this will likely impact interest in skin care,” said Yarden Horwitz, cofounder of Spate.

Data firm Trendalytics has tracked increased interest in snow and tremella mushrooms, which are both seeing double-digit increases as topical beauty ingredients in searches from last year. General searches for snow mushrooms have grown 141 percent, according to Trendalytics.

“With wellness in general, people are being a lot more holistic about the way that they think about mental health as aligned with your physical health,” said Cece Lee Arnold, chief executive officer of Trendalytics.

In the U.S. market, mushrooms have not always been of interest to consumers. But lately, more and more people are recognizing their health benefits, which have been harnessed by other cultures, including in Chinese medicine, for generations, experts said.

Dr. Andrew Weil, an integrative medicine practitioner who collaborated with Origins on the Mega Mushroom line, said he’s seen a massive shift in U.S. attitudes. When he became interested in mushrooms in the ‘70s, most Americans didn’t recognize their health value.

“There was no research on them at all, and I had begun to learn about traditional Chinese medicine, and was very struck by the fact that in East Asia, mushrooms are so highly valued,” he said.

“Now, this is such a hot topic. There’s been an explosion of research…and a profusion of products on the market and consumer demand for them is tremendous,” Weil said.

The Origins’ Mega Mushroom line is a global bestseller. A bottle of Mega Mushroom Relief & Resilience Treatment Lotion is sold globally every seven seconds, the brand said, and the line has grown about 35 percent over the past three years. A new product, Mega-Mushroom Weightless Hydrating Moisturizer, made with reishi mushroom, fermented chaga mushroom and hyaluronic acid, will launch this April for $34.

Origins and Weil have collaborated for more than a decade, since the brand approached him to help create skin care products. “I said that I really knew nothing about skin care products, but I can probably think of some novel ingredients,” he said.”My first suggestion was to look at mushrooms for anti-inflammatory effects.”

Those types of potential benefits are top of mind for consumers, and today’s mushroom wellness brands often clearly spell out benefits on product packaging.

“As time went on, we figured out easier ways of communicating the benefits. Earlier on, we were very focused on the ingredients. People are busy and they just want to get a taste of ‘what do I get from using this,’” he said. 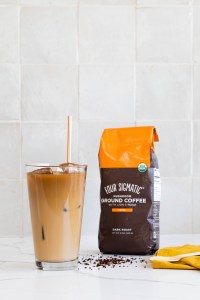 Four Sigmatic makes both ingestible and beauty products, including coffee with Lion’s Mane, Cacao Mix with Reishi, Adaptogen Immune Support shots with Chaga and Golden Lattes with Turkey Tail. The brand also makes completely edible skin care products, including Superfood Serum that can double as a stress supplement, and a Superfood Face Mask that doubles as hot chocolate.

Isokauppila combines research and historical use in order to determine which mushrooms to use in formulations. “If a culture has used an ingredient generation after generation and that’s tested as a sacred ingredient, either for beauty or ingestible, that probably means there’s something there,” he said.

Isokauppila said he uses different types of mushrooms to aim to provide different benefits in the products, including Tremella for hydration and Chaga for antioxidants. “One cup of Chaga would equal like, 40 pounds of blueberries,” Isokauppila said.

Four Sigmatic is now a “high-growth company,” Isokauppila said, due in part to shifting attitudes around wellness.

“There’s more awareness of mushrooms in general and mushrooms in beauty,” Isokauppila said. “Health and wellness is a big focus area across the board with consumer groups, and COVID-19 has not slowed it down, it’s accelerated it.”

At Goop, Four Sigmatic and other mushroom-forward offerings have been a hit with the retailer’s wellness-oriented shoppers.

There, customers are both looking for pre-blended entry points to the space, as well as individual mushroom powders and supplements, said executive beauty director Jean Godfrey-June.

“There’s a person that knows exactly what they want and would go to [individual ingredients], who make their own concoctions. Then, there’s also the person who’s dabbling in it, and is interested,” Godfrey-June said. “We have always done really well with Four Sigmatic, and now, the new Kora Organics [Milky Mushroom Oil] cleanser. We just introduced it and it’s done really well for us.” 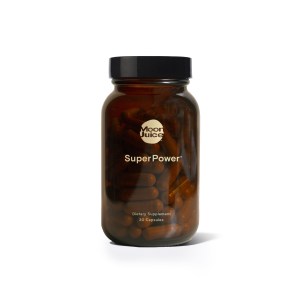 Mushrooms run across the brand’s stock keeping units, ranging from skin care to ingestibles. Bacon uses silver ear mushroom, which is said to share similar moisturizing capacities to hyaluronic acid, in the brand’s skin care, and Lion’s Mane in supplement powders meant for neuroprotection, she said.

When she first founded Moon Juice, Bacon said customers were mainly “radical with really open boundaries,” but today, the base has broadened.

“People are really paying attention to education in a new way, really wanting to know all about those ingredients and how they work biologically,” she said, adding that customers are showing more interest in her single mushroom powders than just her pre-concocted adaptogenic blends.

“We are entering the new frontier, and we can just see from the numbers that the interest is growing. It’s no longer a trendy, New York, L.A., metropolitan thing,” Bacon added.

Robyn Caywood, founder and chief science officer of Kamu Labs, a CBD and adaptogen ingestible brand, agreed, noting that potential for ingredient use is unbridled. “We’re now in that phase where the rest of the country is catching up, and there is this trend everywhere for health and for taking more responsibility for being healthy. More importantly, people are seeking solutions,” she said.

“The future is that everybody is going to be interacting with a mushroom in their life on some level, whether that is your face serum, something for your hair, your handbag is made out of mushroom leather, and your bedside table might be made out of mushroom,” Bacon said.

Indeed, mushrooms are making their way into the mainstream, from beauty product packaging with Loli Beauty to fashion, with Stella McCartney’s experimentation with fungi-based fabric.

Board-certified dermatologist Dr. Dendy Engelman said fungi is a fertile ground for research and innovation. “We’re having this renaissance of Eastern and Western medicine playing nicely together for once,” she said. “Ancient herbs and minerals have been a mainstay in Chinese medicine for so long. And if you were Western-trained, that was either looked down upon or not fully understood,” she said.

Engelman said kojic acid, which comes from mushrooms, has been used clinically in dermatology for years. “Now, we’re showing that there are so many other benefits, such as the antioxidant ones and anti-inflammatory ones. Those are key things that we think about with chronic inflammation in the skin, causing inflammation or self accelerated signs of aging,” she said. Mushrooms have also become the subject of many studies, making establishments in western medicine less skeptical of their purported benefits.

Engleman drew a connection between the legalization of recreational marijuana in New York and the surge of CBD and THC products, and the use of mushrooms in potentially medicinal ways. “I think of all of my psychiatry friends who talk about microdosing psilocybin for recalcitrant depression or PTSD. We have been holding onto these judgments against whole categories of potentially helpful things. Now we’re really looking at those in a less judging way,” Engelman said.

He said that movement is tied in with the increased interest in mushrooms from the beauty and wellness perspective. “They’re linked in that there’s a growing appreciation for the positive attributes of mushrooms, which was not really in the culture until recently,” he said.

She noted there are benefits to eating mushrooms, including gut health and immunity, and has seen an uptick in “functional food products,” like teas and supplements that contain mushrooms.

While there is “no harm” in drinking tea or other products with added mushrooms, Naidoo said she’d advise clients to add mushrooms into their diets before starting a supplement regimen.

“The thing about supplements people should speak to their doctors, they should check it out, they shouldn’t just think, ‘Oh, I saw that on TV, let me take it.’” 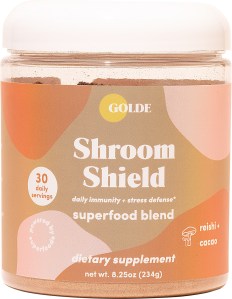 For super food brand Golde, which is best known for its turmeric latte and matcha tea blends, mushrooms have opened up an entirely new category, said cofounder Trinity Mouzon Wofford.

“We saw this with turmeric, we’ve seen this with matcha. Now, we’re starting to see it with this full category of functional mushrooms,” Wofford said. “It’s not just one mushroom. There are all different mushrooms that have different types of benefits.”

Golde recently launched Shroom Shield, a powder supplement meant for immunity and stress management. It contains reishi and turkey tail mushrooms, and is meant to be added into beverages. Wofford found via social listening that her consumers were either inexperienced with mushrooms, or had said they didn’t like the tastes of mushroom powders — so, she formulated Shroom Shield to emulate the taste of hot cocoa, she said.

Wofford is playing heavily to ingredient education, given mushrooms’ reputation for being either culinary or psychedelic. “From a marketing perspective, there’s nothing wrong with leaning into those stories a little bit, and creating that magic for the customer. But I do think it’s important to, as a wellness product, communicate that this is something that is safe and third party lab tested,” she said. “It’s not like something that you’re getting from your funny friend’s backyard.”