Ricky Croft is out to turn the home bathroom into a tanning parlor. 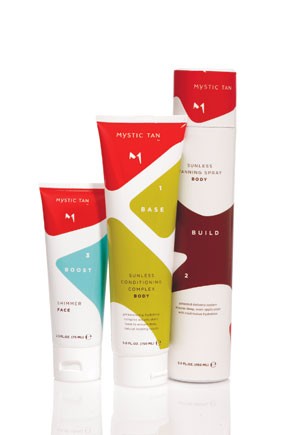 Ricky Croft is out to turn the home bathroom into a tanning parlor.

Croft, a co-developer of the Mystic Tan system for spas and health clubs, has translated the process into a retail, at-home line that will be launched by Sephora starting as early as this weekend and stretching into early April. The sunless tanning products will be distributed through the chain’s 175 doors plus sephora.com.

“Mystic Tan is an incredible brand and we jumped at a chance to partner with them,” said Betsy Olum, senior vice president at Sephora.

As a tanning parlor business, Mystic Tan was begun in 1998 by Croft and Troy Cooper, who has since retired. The pair developed their first tanning machine in a garage in Addison, Tex., Croft recalled.

There are now 5,000 booths in use in the U.S. and sprinkled around Europe, he noted, estimating that 20 million tanning sessions take place each year.

Croft declined to discuss sales figures. But industry sources estimate that Mystic Tan’s spa tanning booth business generates $100 million a year in retail volume. Sources also figure that the new consumer products could do $10 million for 2009, once further distribution is developed. Sephora has the line exclusively into mid-summer, according to industry veteran Steve Boch, who is consulting on the project.

The executives maintain that the widespread presence of the Mystic Tan name, thanks to the thousands of tanning booths, will help impart an ownership position within the sunless tanning category at retail.

There are two kits, one for the body and one for the face. Each has three elements. The body kit has products performing three functions — base, build and boost. The face kit is similar except the boost function is handled by a shimmer product that is designed to add a luminescent glint to the face. The build product is a sunless tanner and the boost product is a gradual tanner that further develops the color.

Croft explained that the formulas work by first conditioning the skin as it adjusts the pH, then a combination of dihydroxy acid, amino acids and hydration combine to speed the tanning process at twice the natural rate. The packaging for sunless tanning spray consists of a can holding a bag attached to a valve. Compressed air forces out the contents, creating a blanketlike mist, which is meant to impart an even tan, free of streaking. Croft, who developed customer support and marketing videos along with the products themselves, stressed that an artificial tan does not provide sun protection and an SPF must be used.

Each kit is priced $54 and produces about three full-body applications. Croft estimated a kit could keep a tan going for four to six weeks. Replacement products will be sold individually, mostly in 5-oz. cans. The base product is priced $26, build is $38 and boost is $26, which also is the price of the 2.5-oz. shimmer replacement product.

The launch will be supported with an advertising campaign featuring the large-size spray tanner, in Sephora’s co-op magazine inserts in Cosmopolitan, Lucky and W — the latter two owned by the same parent company as WWD, Condé Nast. The Body Kit will be featured in the perfumery chain’s summer catalogue. There also will be e-mail blasts, samplings and in-store training.