Narciso Rodriguez Expands With Second Scent for Her 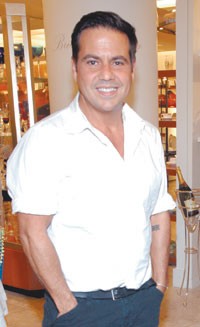 Over an intimate dinner with 17 newspaper and magazine editors, Rodriguez spoke about the process of creating a new fragrance interpretation, a new version of his original scent, Narciso Rodriguez for her, which launched as an eau de toilette in September 2003. The new edition sports a different, pink floral top note containing rose and peach pulp.

“The [original] has been so well received. Women have said so many nice things,” he said. “It’s great to be able to expand on the initial concept, but also keep the integrity and all of the creativity and passion that went into the first.”

When the conversation changed to fashion, Rodriguez had celebrities on his mind, citing the recent influx of bold-faced names making their way on Seventh Avenue. “The nature of fashion has changed,” he said, adding, “There are so many celebrity collections — but it’s like comparing a comic book to a Eugene O’Neill play.” Apples and oranges aside, the Cuban-American designer is not one to judge: “I think it’s fantastic that fashion has reached a broader audience,” he said.

And, with the launch of Her Eau de Parfum, Rodriguez is hoping to do just that, if not at least expand on the following he’s been building since the launch of the original eau de toilette.

Nathalie Helloin-Kamel, vice president of marketing for Narciso Rodriguez Parfums, hopes the eau de parfum will appeal to existing Rodriguez fragrance fans and also attract a new contingent. “This is the chance to recruit a new customer, but it’s also important to maintain the loyalty of the original customer,” she said. Louis Desazars, president of Beaute Prestige International USA, Rodriguez’s licensee, added that the original fragrance has been building a loyal following since its launch two years ago. “We have an extremely high repeat purchase,” he said.

When asked if he has any plans to introduce an additional scent — women’s or men’s — separate from the “for her” franchise, Rodriguez would only say, “I have a long list. I’m always dreaming up new things. It’s more, ‘Can we get it done in this lifetime?'” He added with a grin, “The fragrance industry works in top secret — we have a lot of top-secret documents.” Rodriguez did, however, grow visibly excited at the thought of moving into color cosmetics. “I have thought about it. Who doesn’t?” he said. “I started thinking about it when I was a teenager. I love color.”

Helloin-Kamel did not rule out the possibility of introducing additional fragrances, but stressed that the company was in no rush. “We’re not only launching new fragrances, we’re building a new house,” she said. “To build it the way we would a house, with pillars and a strong foundation, we want to be careful and make sure we are faithful to the spirit of the designer — we want to be consistent with the brand.”

Featuring soft pink packaging with black letters — an inside-out version of the original bottle, which featured black packaging with pink letters — Her Eau de Parfum will be on counters July 1 at Saks Fifth Avenue, where it will remain exclusive until mid-September, when it will roll out to Bloomingdale’s and 88 Nordstrom doors, according to executives.