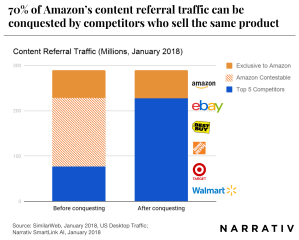 Shirley Chen has what she believes is marketers’ competitive ammunition to compete against e-commerce giants like Amazon. She founded Narrativ, an artificial intelligence-powered tech company in 2015 to make it easier for consumers to find what they want at the best price online. “Our humble mission here at Narrativ is to save the world from Amazon,” she explained. “We built a marketing engine that delivers superior ROI [return on investment] and customer acquisition than search.”

Product search has been the backbone of e-commerce growth and the major vehicles to attract customers. Today, paid search is a $40 billion business. However, Chen maintained, commerce content, an emerging category of editorial recommendations on publishers’ sites, is actually four times bigger.

The problem is that too often, consumers are driven to dead or out-of-stock landing pages even if another retailer has the item in stock. Furthermore, the searches are often hardwired to direct shoppers to Amazon. She estimates commerce content tops $25 billion in revenue at Amazon — 23 times that of Walmart. “It has been their secret weapon for the past 20 years.”

Last summer, powered by $3.5 million in venture capitalist funding, Narrativ unleashed SmartLink technology. The platform transforms story components into organic advertising without publishers having to alter the editorial. Basically, SmartLink triggers a real-time auction when a consumer clicks on a product link in editorial. Chen said commerce content drives four times more traffic to the top 100 retailers than paid search. More than 500 merchants partner with Narrativ and bid for traffic to the products sold on their retail sites. Narrativ, she added, is on track to generate $600 million in advertiser revenue this year.

Beauty is a core category for Narrativ, especially since research shows 80 percent of consumers research a product in the category before buying. The industry has been an early adopter of Narrativ’s technology. Dermstore was one of the early partners, but it is also used by Ulta Beauty, Neiman Marcus and Nordstrom. After implementing Narrativ, Dermstore said its ROI soared 67 percent and revenues expanded more than 600 percent. Seventy-eight percent of links Narrativ connected Dermstore to in the first month were originally hardcoded to competitive retailers.

“Content has never scaled like search until Narrativ,” said Bumsoo Kim, director of marketing at Dermstore. “Without their technology, it would have taken us a very long time to get access to the same depth of content.”