“Every morning before training, my mother would make me celery juice and I didn’t realize the benefits of it when I was growing up,” the former gymnast said.

Gymnastics star Nastia Liukin is no stranger to health, wellness and beauty, and her latest collaboration with Volition Beauty marries all three. She’s the creator, along with a team of scientists, of what she’s calling the first celery-powered moisturizer, which launches today.

“When I learned that they only bring a product to life if their community votes for it, I was like ‘Oh my gosh, that’s so cool,’” Liukin told WWD of working with the brand on the Celery Green Cream, which promises to hydrate and purify the skin. “I’ve always been community-driven, even when I was competing at the Olympics and meeting with fans.”

Volition relies on crowdsourcing for product development and seeks suggestions from consumers. Brandy Hoffman, Volition’s cofounder, acknowledges the appeal of uniting tech and beauty, but said the key is really to address the problems and concerns consumers actually have. “What would happen if we started with the problem from women instead of just marketing products and telling them that they had to have them?” was the question she and cofounder Patricia Santos asked themselves before launching the brand in 2016. “We want to represent everyone, we want great products, and we believe fundamentally this process yields better products.”

Volition also has a knack for identifying trends. Its Turmeric Brightening Polish took a cue from traditional Indian skin-care rituals before the plant started turning up in trendy lattes and milk. The celery-powered moisturizer is no different, and the partnership with Liukin was authentic. 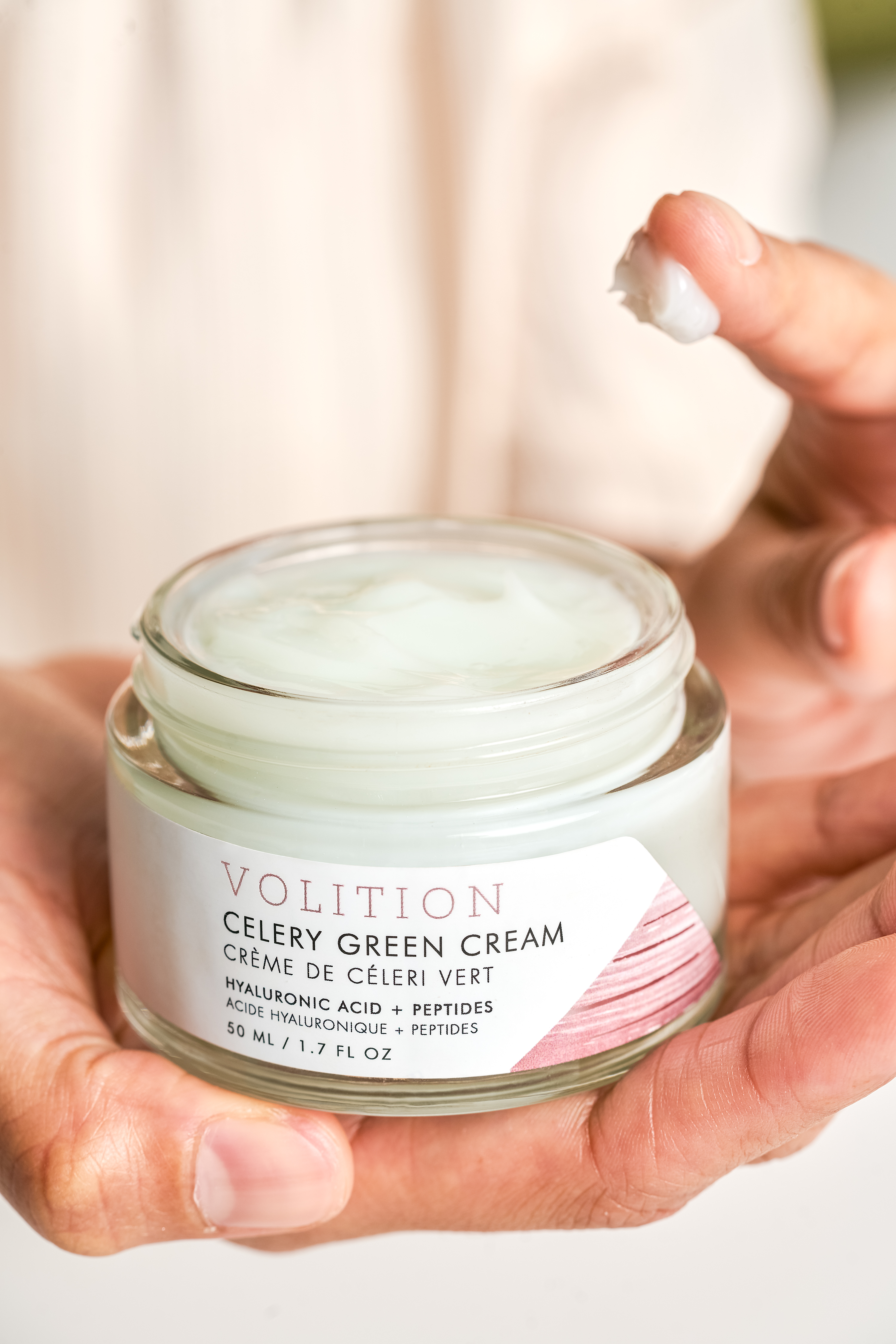 “Every morning before training, my mother would make me celery juice and I didn’t realize the benefits of it when I was growing up,” Liukin said. “As I got older, I began to realize how great it is for your body.” After a long few days of traveling and feeling sluggish, Liukin turned to her go-to wellness method and that’s when the idea clicked: “We thought, celery is having such a moment and if it’s really this good for you, can it be good for your skin, too?”

After working on a past Instagram partnership, she reunited with Volition to create the product, which retails for $55 and is available for purchase at Sephora stores and online at VolitionBeauty.com.

“People look up to me and rely on me for health-related questions,” said the 2008 all-around Olympic champion and five-time medalist. “I wanted to make sure that I wasn’t doing this because it’s “in,” and while that helps, it’s not like that was the reason. It was truly because we drink celery juice all the time.”

Since retiring her gymnastic leotards, she’s turned to a lot of on-camera work, and paying closer attention to her skin came naturally as a result. “I wanted to find a moisturizer that worked well with my sensitive skin, and that I can wear under my makeup. But, I also wanted something that I could wear on a day where I’m not on camera and I could just walk out the door,” she said.

Liukin will head to Tokyo next year as a commentator for the 2020 Summer Olympics. Being on the other side of the Games is different for the former gymnast, who now considers herself an expert in the field after nearly 20 years. Her first stint as a gymnastics analyst was at the 2016 Rio Games. “I’ve made it a big effort to do my job and to analyze and to commentate, but in a positive light.”

As a sport, gymnastics is still in recovery mode, after having its own #MeToo moment. In January 2018, Larry Nassar, former USA Gymnastics and Michigan State doctor, was sentenced to 40 to 175 years in prison for multiple sex-related charges. More than 150 young women came forward and confronted Nassar on their experience at the hands of his abuse. Liukin has spoken out about the pain this has brought the gymnastics community and commended the women for sharing their stories.

“It’s not something that you just shut the door on and say ‘Hey, the lawsuit is over.’ That’s not how it’s going to work,” Liukin said. “There are still things that need to be worked on and worked out. But, it’s also not something that we should ever forget about. We’re all excited about the next Olympics, but you can’t forget about that because, it shook our world and really the entire world, pretty heavily.”

Liukin fully owns up to her responsibility as a role model for young women and men both in and out of the sports world. “I feel very honored that people do look up to me. I’m also very lucky that growing up I had so many amazing role models and mentors and I just remember the impact that they have left on my life.”

As much as she shares a love for beauty, she understands the importance of being vulnerable from time to time, especially online. As someone who works with a team of hairstylists, makeup artists and photographers quite often, she makes it clear that this isn’t her “real” life. “Every single time I talk to anyone I say ‘That’s not my real life. That’s snippets of my curated life,’” she said.

Apart from her collaboration with Volition and her career as a commentator, Nastia has other partnerships in the works. She hopes to someday have her own fashion collection, as she designed all of her leotards during her days as a gymnast. “One of my favorite things is taking an idea, putting it down on paper and seeing it come to life. And this is how it was with this product, all the way down to the packaging, and it’s just been so cool to see,” she said.