PARIS — New beauty retail concepts keep blooming in Paris, despite an unstable socioeconomic environment magnified by massive demonstrations and strikes, which have plagued the city over recent months.

The latest crop of shops to appear includes Lancôme’s flagship on the Avenue des Champs-Élysées; Sources, a “clean” beauty purveyor launched by hypermarket Carrefour, and Floraïku, a boutique selling the niche luxury fragrance collection by the same name.

Paris, which has long claimed to be the world’s capital of beauty, is a key window onto brands, especially as the city remains among world’s hottest tourist destinations. In the first half of 2019 alone, Paris registered 17.3 million visitors, according to the Comité Régional du Tourisme Paris Île-de-France.

Brick-and-mortar retail remains important in the country, where just 7 to 8 percent of beauty sales are made online, according to NPD. “It’s far from the U.K., the U.S. or even Germany,” said Mathilde Lion, a Paris-based analyst at the market research group. “It’s still underdeveloped.”

“I think the current Brexit situation is a plus for Paris,” continued Marc-Christian Riebe, founder and chief executive officer of Zurich-based retail research firm Location Group. “Many retailers decide not to go to London first, but to Paris. They have uncertainty and say ‘Let’s wait to see what’s happening in England.’”

Various types of beauty shops have been debuting. “We’ve seen a development of flagships and also concept stores over the past few years. It’s a trend that continues,” added Lion, noting three main areas where the openings are concentrating most: the Marais, around the Champs-Élysées and near to the Opéra Garnier.

A common thread running through the new beauty sellers is their heightened experiential quotient. Here, a look at three of the latest openings.

The two-story, 3,330-square-foot Lancôme flagship on the tony Avenue des Champs-Élysées is meant to channel happiness and be highly immersive, with elements including products, personalization, tech, services and gifting.

Upon entering the shop, visitors are met with a space, entitled Joy of Now, for pop-up concepts. The vast perfume area carries Lancôme’s portfolio, and here, digital videos can be accessed to learn the scents’ stories. People can try on makeup in the color-cosmetics area, where there’s a “colorama catalogue wall” arranged by category. In this area, too, are five makeup advisers and master classes will be held. 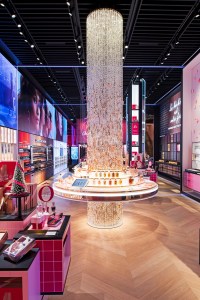 Inside the Lancôme flagship.  Courtesy Photo

Over in the skin-care section, visitors can get advice and use diagnostic tools, plus read about the treatment products’ textures, technologies and patents. From there, people can walk up one flight to have one-on-one consultations and beauty treatments.

Digital and tech tools, such as Shade Finder, Le Teint Particulier and Youth Finder, can be accessed around the store.

“Our clients need more and more reassurance about products, whether from the food or hygiene-beauty markets,” said Valerie Fournier, who oversees beauty at Carrefour, adding it is complicated for people to understand cosmetics’ ingredient lists.

Thus the idea for Sources was born. With transparency at top of mind, the products carried in the store cannot contain any of the 75 “controversial ingredients” Sources outlines. Partnering with the Clean Beauty application to vet ingredients even further, Sources highlights on merchandising units a selection of products it considers “ultra clean,” with a new label it coined, “Les Yeux Fermés” (or “Eyes Closed”).

The 2,890-square-foot store is divided into various product categories, such as makeup, facial care, body care, hair care, hygiene, men’s, dermocosmetics and baby, with prices ranging from mass to prestige levels. Services in the three treatment rooms one floor down include facials, manicures and waxing. A barbershop/hair salon for styling is on the left upon entering the boutique.

There are 170 brands carried here, including Marlie, Kadalys, Sa.al & Co and oOlution.

“The idea is really to have everything in the same place,” said Fournier, who said the store is also meant to cater to women and to men with “honest beauty.”

Floraïku, the niche perfume brand taking a cue from Japanese traditions and ceremonies that was created by Memo founders Clara and John Molloy with 50 percent natural ingredients, has opened its first shop in the French capital.

“Floraïku is a French brand, made in France, and all the noses that work with us are French,” said John Malloy. “Paris is still the capital of luxury and perfumes. It was only logical to have our flagship next to the prestigious Avenue Montaigne.”

Clara Molloy said the Floraïku is meant to be “like a reverie about Asia.” The brand’s team wrote haikus, each of which become the inspiration of a perfume’s name. There are 23 in all. 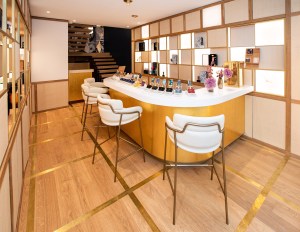 The 670-square-foot, two-story shop full of wooden, silk, marble and oak details has at its center point a bar, where visitors are meant to sample the scents — spanning spicy, floral and incense families — like in a tea-like ceremony.

Floraïku, which was launched in 2017, is sold in 35 sales points worldwide and counts three other boutiques — in London, Taipei and Jakarta.