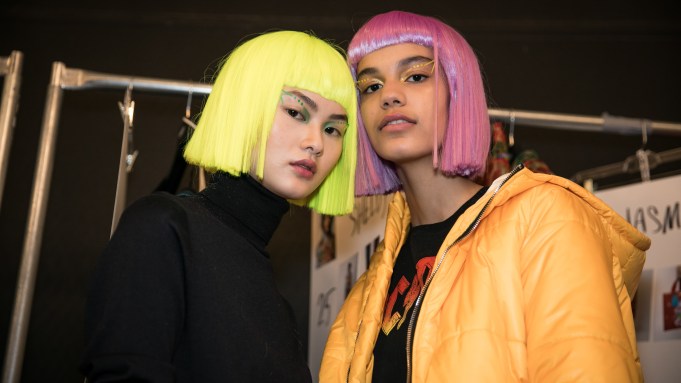 COLOR COMEBACK: After several seasons of “no-makeup makeup” and “natural hair” ruling the New York runways, many makeup artists and hairstylists embraced color in full force this season. The usual suspects — designers who typically incorporate color into their beauty looks, including Chromat and Marc Jacobs — were no surprise. At Marc Jacobs, Redken creative director Guido Palau dyed nine models’ hair vibrant shades of punk-themed hues, like a steel-y blue, bold purple and magenta. But even Carolina Herrera and Oscar de la Renta, who often highlight elegant natural beauty, got in on the fun with a deep blue smoky eye and red glitter, respectively. Makeup artist Diane Kendal noted the shift in focus from seasons’ past. “It’s a nice way of playing with makeup,” she said. “It’s a way of creating a look without being too [made-up] — there’s no lip, there’s very little cheek, it’s just all about the eye.”

FLUFFY TEXTURE: Models walked the runway at several shows with light and airy hair with a soft, touchable texture. Products were used sparingly. “We’re taking the hair and bringing it into an Eighties world,” said hairstylist and R+Co founder Garren. We wanted to get texture and meat into the hair. We gave it an undone texture, but it still feels touchable.” Pointing to his own mop of curls, hairstylist Orlando Pita said backstage at de la Renta, “We have two girls with hair like me, and I can’t believe I convinced them to go with it.”

NINETIES HAIR ACCESSORIES: Fashion’s Eighties and Nineties nostalgia has hit a fever pitch. Tom Ford opened the week with a slew of oversize leather and fabric headbands, which hairstylist Orlando Pita fashioned intentionally just slightly over the ears and forehead. Anthony Turner at Prabal Gurung secured his athletic-style buns in place with accordion headbands. At Alexander Wang, Redken creative director Guido Palau used custom-designed metal claw clips as the pièce de résistance in his “modern ceo”-inspired look. Said Palau, “It feels young, with a slight irony to it.” Expect Ricky’s to be sold out of claw clips for the next six months.