NEW YORK — There’s something to be said for a simple bun hairdo — but at the runway shows this week, most stylists’ buns turned out to be anything but simple. 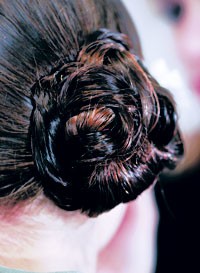 NEW YORK — There’s something to be said for a simple bun hairdo — but at the runway shows this week, most stylists’ buns turned out to be anything but simple.

Very few tightly controlled ballerina knots — a perennial runway favorite — were in evidence. This time around, the models looked like they’d combed their hair with egg beaters before messily pinning it up themselves. Still, the doin’-it-for-yourself bit worked. “We’re going for something really natural here,” said Charles Worthington at Matthew Williamson. “The hair is natural and feminine like the girls could do it themselves.”

Loose pieces? It’s part of the look. “It’s a variation on a Twenties thing,” said Jimmy Paul, who used Bumble and bumble’s Thickening and Surf sprays to create piece-y chignons at Bill Blass.

“I don’t like that perfect structure,” said Orlando Pita, who styled hair for Aveda at Vera Wang. “It’s too put together — it can look unapproachable.” No hair? Stylists laid in a big supply of extensions to knot that problem right up.

“It’s a relaxed, sexy look,” said Frédéric Fekkai of the loose chignons he created at Diane von Furstenberg. “It looks like the girls pinned it up themselves, with pieces flying out at the hairline. It complements the look of the sophisticated clothes.”