The palette is the YouTuber's first since her Too Faced collaboration, which caused online chatter about how much she was compensated.

Nikkie de Jager is hoping her new palette is a “chance for redemption.”

The beauty YouTuber previously collaborated with Too Faced on an eye shadow and face powder palette that gave way to much online chatter when controversial YouTuber Jeffree Star alleged Too Faced hadn’t adequately compensated de Jager. Star revived his claims, which he first made in 2017, in his Shane Dawson YouTube series, alleging that de Jager was paid $50,000 for her Too Faced collaboration — despite it raking in more than $10 million for the company.

Since Too Faced, de Jager has partnered with Ofra Cosmetics on a line of highlighters and liquid lipsticks, but she has purposely refrained from a second palette — until now. De Jager has created a 20-pan eye shadow palette in partnership with U.K.-based retailer and brand incubator Beauty Bay. Priced at $30, the collaboration launches globally on Aug. 31 via Beauty Bay’s web site. 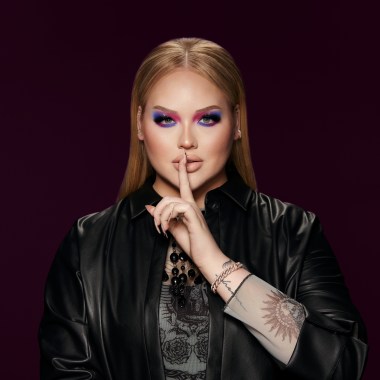 “For the longest time, when I heard ‘eye shadow palette collab,’ I was like, ‘Oh, hell no,'” said de Jager.  Courtesy of Beauty Bay

“Everybody knows about what happened in my career in the past and how I trusted the wrong people,” de Jager told WWD via phone. “I was a bit too naive, so for the longest time, when I heard ‘eye shadow palette collab,’ I was like, ‘Oh, hell no.'”

As her Too Faced collaboration received criticism for a lack of quality, de Jager was eager to ensure the formulas and textures of her Beauty Bay palette were up to par.

“It felt like this was a chance for redemption,” de Jager said. “I always dreamed of creating my own eye shadow palettes with my vision and colors and textures that I love, but I was always too afraid to dip back in. As I saw the formula and felt that I was surrounded by good people, I was like, ‘We can give this a shot.’”

The palette’s original release date was pushed when de Jager came out as a transgender woman via a YouTube video posted in January. De Jager said in the YouTube video that she made the decision to come out publicly after receiving threats from people who knew of her transition.

“We wanted to make sure that no matter what, [the Beauty Bay collaboration] was never seen as a publicity stunt, so we delayed anything after coming out,” de Jager said.

Earlier this month, de Jager shared via Instagram that she had been robbed at gunpoint.

“Earlier today, one of my biggest nightmares became reality when we got robbed under gunpoint at our own home,” read her Instagram post.

Beauty Bay gave her the option to push back the palette’s release once more, but de Jager declined.

“A couple of weeks ago, I got robbed,” she told WWD. “Beauty Bay was kind enough to give me time to think about it, and I was like, ‘No, I’m not letting anyone take this away from me ever.’ It’s great to finally be here and be able to talk about this and take back control.”

For the past 20 years, Beauty Bay has been sourcing and curating makeup brands such as Urban Decay, Too Faced, Mario Badescu and Anastasia Beverly Hills to sell through its direct-to-consumer web site in the U.K. The company launched its own products in 2013, but discontinued the line two years later. In 2018, Beauty Bay relaunched its product line with a focus on influencer collaborations.

Industry sources estimate that Beauty Bay’s global business will bring in $170 million in gross revenue this year, trending up despite the coronavirus pandemic.

Asked how his business has been impacted by COVID-19, Beauty Bay chief executive officer David Gabbie said the company was “well-placed to pick up the demand that fell away from retail.”

“We’ve been around for a while, we have good infrastructure,” he said. “One of the concerns earlier on was with supply chain. On the whole, we’re really lucky. We didn’t furlough anyone, the business has continued to go from strength to strength. Our strategy from Day One has been: you don’t need brick-and-mortar to shop beauty. You can buy, discover and learn about beauty online, which is something we’ve been championing for 15 years. Now it’s starting to resonate with some of the more established houses.”