Acupuncture, juicing, meditation — Norma Kamali has been a proponent of the tenets of modern wellness culture long before they went mainstream.

In 2001, she opened a wellness café in the basement of her West 56th Street showroom, selling things like Liquiteria juices, holistic toothpaste and her own line of personal-care products and olive oils. Before that, in 1993, she had another line of beauty and personal-care products, sold at kiosks in Bloomingdale’s alongside cassette tapes featuring an audio reel voiced by Kamali herself, encouraging women to stop covering their natural skin with makeup — an early take on the now omnipresent no makeup-makeup look.

Kamali is happy to admit she was early to market with her now-shuttered wellness ventures.

“I didn’t really talk about it, because nobody wanted to talk about it — if I did, I would get ‘Oh she’s so kooky — those designers.’ Condescending. I decided to just keep learning,” she said.

In September, Kamali will try her hand at a wellness brand again — this time, a simple unisex concept designed to help consumers cut through the clutter of the wellness product market, which Kamali thinks has gotten too far away from the simple principles of a healthy lifestyle. Don’t even get her started on ingredients she thinks have been touted too frequently as miracle cures, such as turmeric and CBD. “It’s a little exploitative,” she said. “Too much of it is a based on a business opportunity.”

Back to Kamali’s business opportunity, which she calls “inclusive and democratic.” Normalife is centered on what she considers to be the three pillars of wellness — sleep, diet and exercise — and is set to launch in September at Selfridge’s in the U.K. and Barneys New York in the U.S.

The brand’s products are to launch in waves — the first is skin care, which will be followed by “meditation scents” and supplements.

Kamali’s skin-care line consists of four sku’s that she considers the tentpoles of good, clean skin, priced from $30 to $40 — Clean Life soap-free cleanser, Smooth Life Exfoliating Cleanser, Soft Life Everyday Moisturizer and Glow Life Color Enhancer, a tanner-esque product made with beetroot. All the products are formulated with a small handful of natural ingredients, such as aloe, crushed olive pits, charcoal and calcium. “The ingredients are fundamental and won’t let you down,” she said. 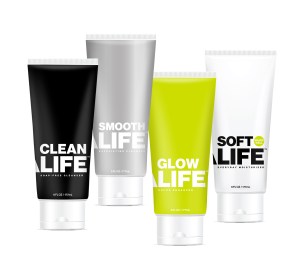 The idea behind Normalife is that of a simplistic approach to wellness that Kamali believes has gotten lost in the clutter of wellness influencers and pricy boutique fitness classes.

Kamali, whose mother was juicing in the Fifties, was inspired to learn more about healthy living after two of her closest friends died during the AIDS epidemic. She’s spent decades studying under now well-known wellness gurus such as Dr. Andrew Weil and Michael Pollan, and she sees the commercialization of living well as having become too confusing for consumers, and isolating to those aren’t able to afford luxury wellness products.

“I believe in being democratic and inclusive and not excluding people from the wellness world,” said Kamali. “After all these years [learning about wellness], I can tell you what ingredient is going to work.”

Part of Normalife’s inclusive ethos is that it is designed to be genderless brand — another thing Kamali was doing before gender fluidity was a mainstream concept. Men have been wearing her clothes for decades, she said, and now, she puts both men’s and women’s sizing information on the tags of everything she puts out.

Up next for Normalife are “meditation scents” and nutritional supplement powders that she said will be simplistic and easy for the shopper to understand. Mediation is something that Kamali takes seriously — every day at 12:30, her showroom shuts down for a thirty-minute meditation session. It’s the best thing she’s ever done for her business and employees, she said.

For now, Kamali is hoping that her skin-care line encourages those who use it to go makeup-free, like she once preached in her Bloomingdale’s cassette tapes — unless they want to use it for creative self-expression, which is another story.