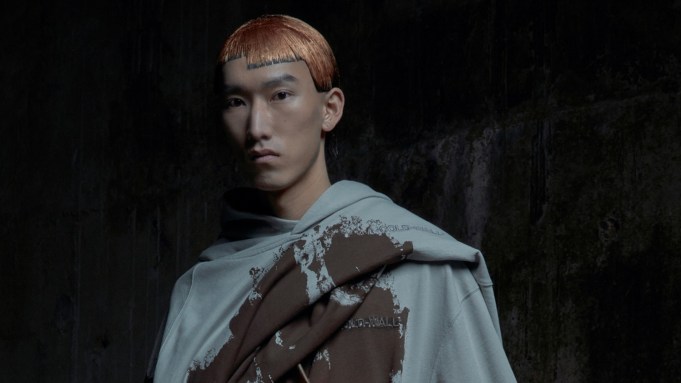 Although natural hair was all the rage during the recent men’s fashion weeks in Paris and Milan, there were some standout, creative looks, too.

Models at Yohji Yamamoto had a bedhead style, tinged with white, made with a mix of sugar water and baby powder.

“I would describe the models’ look as deathly or ghostly, but at the same time they gave the impression that they were classic gentlemen,” said Dai Michishita, who took inspiration from writer Edgar Allan Poe. “Yohji-san’s initial instruction was: Men came back to this world from death for just one day.”

Meanwhile, some models at Ziggy Chen sported long braids. “We wanted to create a rugged and primitive male image to match the theme of the collection. And in the hair design process, we wanted to create a dramatic and conflicting effect, without drawing too much attention to ourselves visually — so long braids were a good choice,” said Erer Lai.

“After deciding on this direction, we incorporated the hairstyles of ethnic minorities from different cultures throughout history as inspiration, as well as a medium parted greasy hairstyle to reflect a sense of understated conflict to match the atmosphere of the collection,” he added.

For Sean Suen, straight bangs partially covered models’ eyes, then the back of the hair left messy.

“I was inspired by an old Chinese phrase: ‘jong ziao’ (‘a child’s hair twisted into a knot’),” said Wenzhi Zhao. He explained that for a long while popular belief held that men’s hairstyles in ancient China had no bangs. However, they did exist in children’s hairstyles. So he felt the bangs on grown men “are particularly outstanding, this kind of [conflicting] feeling is wonderful,” said Zhao.

At Etro, Louis Ghewy and the Wella team led by Giorgio Parrivecchio included some Punk heads in the overall natural beauty look, which was inspired by Italian boys in the 1990s. “The hair look originated from a melting pot of styles hailing from different worlds, often opposite ones,” said Parrivecchio, underscoring that the men in the decade of reference “aimed to look like iconic names such as Kurt Cobain, Johnny Depp and Brad Pitt.”

“To strengthen this concept, we have included two Punk chic [hairstyles] that brought color on the men’s catwalk,” added Parrivecchio, referencing a messy style realized with a colorblocking technique mixing tufts in bold shades of pink, orange, blue and black, as well as an eye-catching checkered head.

“I wanted to give the hair a very [sculptured effect] and blunt line/graphic look. The addition of metallic colors gives the entire look a more surreal take,” Inagaki added.

Beauty Looks Dial Up in Paris

The Best Beauty Looks at the 2021 Met Gala