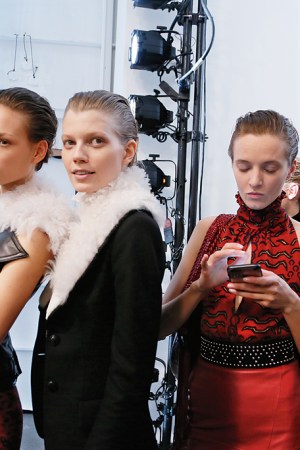 Genius hairstylist Odile Gilbert has been a staple backstage at fashion shows since her first with John Galliano in 1994. Anna Dysinger shadowed the Parisian-born star at New York Fashion Week to get her take on the season’s key beauty trends.

Karlie Kloss glides into the backstage hair area 30 minutes before the Jason Wu show is scheduled to start. Odile Gilbert, the epitome of comfort in black stirrup leggings from The Row and black UGG Australia slippers, whisks the supermodel into a chair and begins methodically wrapping small sections of her hair around a curling iron, chatting away with the leggy beauty like an old friend. Gilbert’s hands move meticulously at a rapid-fire pace, but she notes that the loose, wavy hairstyle is much more arduous than an intricate updo. “It’s often more difficult because it’s simple,” she says. “Natural hair has more movement and is alive.”

A throng of photographers, editors, bloggers and other camera-wielding media folk close in, eager for a money shot of the duo. A petite male photographer with three cameras slung around his neck aims and shoots, holding down the shutter-release button so his camera sounds like a machine gun. Gilbert gives him a threatening sideways glance; he stutters something about creating a GIF and shuffles away.

Gilbert is a woman of few words while she works, unless she’s giving editors the spiel about the hairstyle—which she does six times an hour, on average. But get her talking about skin and her eyes light up. “I love transparency of the skin—it’s very important,” she says during a hair test for Rodarte. As proof, she pulls a carefully folded picture of fresh-faced model Aya Jones out of her purse. “I mean, look at her skin,” raves Gilbert, habitually pushing her cheeks up to tighten her face. She does the same thing when Donna, who’s shooting the fitting, asks for a picture of her tousling the model’s hair for Instagram. “Just look at her skin,” she whispers, pulling her cheeks taut before staging the photo.

Gilbert may be the queen of coifs backstage, but insists she is serving a larger vision. “What is very important when you work for a designer is to remember they work a long time on their collections and they usually have a very precise idea of what they want,” she says. “If they want crazy, we make crazy. If they want natural, we make natural. It’s not about creating. It’s about having the right hair and makeup for the collection.” Still, there is no doubt of the artistry and creativity that Gilbert and her peers bring to the job. Here, she shares the inspiration behind the hair and makeup ideas at the New York shows she worked on.