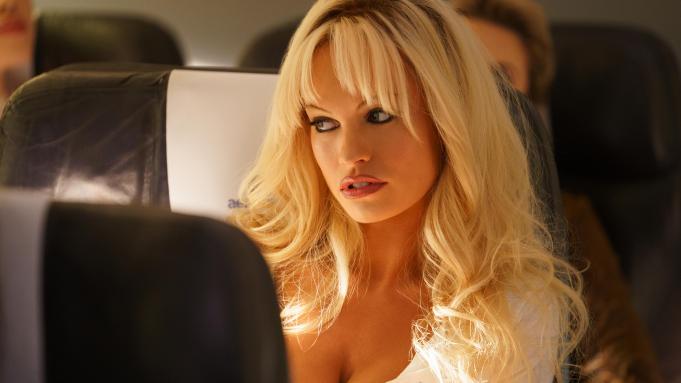 When paparazzi photos of Lily James and Sebastian Stan on the set of Hulu’s limited series “Pam & Tommy” were released last spring, many were shocked by the stars’ uncanny resemblance to the titular characters.

“For me, authenticity and believability are absolutely paramount,” Williams said about working on the show. “I wanted to stay as true to Pam as could possibly be done because we are replicating an image that is well burned into the zeitgeist of America.”

Hulu’s “Pam & Tommy” is a dramatized retelling of Anderson and Lee’s marriage and the unauthorized release of their sex tape. The two figures were married in 1995 after knowing each other for four days and became one of the most well-known celebrity couples of the 1990s. They ultimately divorced in 1998. The show also casts Seth Rogan, Nick Offerman and Taylor Schilling, among others, and airs new episodes on Wednesdays.

While both James and Stan had extensive transformation processes, the former’s required the most prosthetics. James’ transformation started with Collins, who took three-dimensional images of the actress and compared her features to Anderson’s to determine what needed to be altered. From the comparison, it was determined James’ transformation centered on a forehead prosthetic, which would allow her hairline to be moved up and her natural eyebrows to be covered.

“I felt like if we could get the forehead to that sort of perfect profile the same that Pam has, then we’d be gold,” Collins said. “Lily has these amazing thick eyebrows that are beautiful and you don’t want to tweeze those, so we covered them up, colored them and put the appliance over. We realized that got us a lot closer to Pam.”

This then helped Moe achieve accuracy with James’ wigs, matching the actress’ hairline to Anderson’s. While authenticity was of the utmost importance for all heads, the hair stylist took slight creative liberties to ensure James’ hairstyles would look realistic and not distract the audience from the performance.

“I had to look at [James’] hairstyles and really determine what was going to work on camera and what wasn’t because Pamela’s hairstyles were over the top and kind of wild,” he said. “Some of these looks, had I re-created them to a T, I knew it would look borderline caricature of almost like Lily James in drag as Pamela Anderson, which none of us wanted. There were some things I took liberties with because I had to make sure they were going to look natural and believable on Lily and not just a wig that was slapped on her head like a hat.”

James’ look was continued through additional makeup, mimicking the thin eyebrows and smokey eye makeup that Anderson regularly sported in the ’90s. It was then completed with additional details like veneers — which imitated Anderson’s smile and pursed James’ lips — acrylic nails and prosthetic breasts to replicate Anderson’s figure.

For Stan, his transformation relied heavily on Lee’s many body tattoos. Similar to James’ process, Stan also had three-dimensional photos taken of his body to determine his body proportions. The proportions then helped Collins’ team figure out how large each tattoo needed to be. The tattoos were then re-created on Photoshop, printed on a special water slide paper and applied to Stan’s body. This process took roughly three hours each day.

While the show spans a few years — during which Lee was getting more tattoos — Collins and his team decided to stick with one specific set of tattoos to not pull the audience out of the show. For instance, Lee’s “Mayhem” tattoo on his torso was only partially completed when he first met Anderson, however, Collins decided to feature the full tattoo on Stan to complete the look.

As Stan is shirtless for a large part of the show, it was also important for Collins to apply nipple prosthetics on Stan to mimic Lee’s nipple piercings.

“I don’t think the [prosthetics] supersede the performance in any way,” Collins said. “These are actors that really took what we were doing and used them as tools. They took these assets that we gave them and really incorporated them into their mannerisms.”

Unlike James, Stan stuck with his natural hair for the show. Moe and his team dyed Stan’s hair a dark brown shade and gave the actor a Brazilian straightening treatment to match Lee’s straight hair.

“We were always dancing that line of movie star and rock star,” Williams said about Stan. “We wanted to keep him in the land of being a rock star. We kind of had to rough him up a bit. Not make [Stan] as pretty as he naturally is — that’s not saying that Tommy isn’t pretty, it’s just a different type of pretty.”

The three makeup and hair leads believe their work was critical for the overall show as the characters’ beauty looks played a crucial role in who they are and what they were going through.

“Something I responded to early on in my research was how Pam’s hair changed from moment to moment,” Moe said. “I saw a real story through Pam’s hair and how she used it throughout her life as a shield. Her hair was something she hid behind at times when she was uncomfortable and you can see her using it as a prop in many ways to avoid a question or shift her energy.”

Collins continued that sentiment, noting that the hair, makeup and prosthetics helped move the story forward and further the connection between the actors and their characters.

“Whenever you do this kind of makeup, it’s one of those things where you either get the essence or an exact match,” Collins said. “I think we were able to get an exact match and the essence at the same time, which I didn’t think we were going to get because Lily on surface value looks totally different from Pam Anderson. The fact that we were able to fine-tune the things she did have in common and build upon felt like we took a scalpel to it rather than a big machete to try to make it work.”