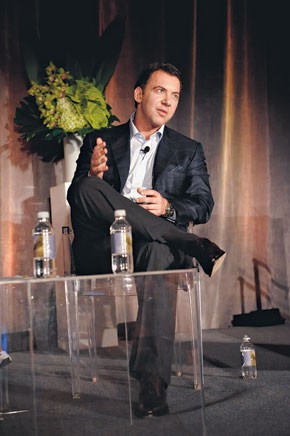 The flurry of merger and acquisition activity in the beauty business was the backdrop for a panel discussion of financial experts at the WWD Beauty CEO Summit.

The panel, moderated by WWD’s beauty financial editor Molly Prior, delved into topics such as why financial investors are interested in beauty companies, the current state of financial deals and insight into what players are eyeing in potential investments.

The panelists were Kelly McPhilliamy, managing director, consumer and retail investing banking group of Wachovia Securities; Jani Friedman, managing director, beauty, of Demeter Group, and Alexander S. Panos, a managing director of TSG Consumer Partners. Among them they’ve handled deals such as the Ulta initial public offering and The Carlyle Group’s acquisition of Philosophy, advised companies like Rx for Brown Skin and invested in beauty companies including PureOlogy and N.V. Perricone.

Back to WWD Spring Beauty

“Why beauty, why now,” Prior asked the group, based on the influx over the last five years of financial companies in the beauty universe. The trio pointed to the high-growth opportunities and bountiful margins in the business.

“I guess one thing I’d add to why financial investors are so focused on this category right now is the attractive dynamics of the market and the mere fact that there have been a number of very visible successes,” said McPhilliamy.
Panos chronicled some of his firm’s on-target picks, such as investing in PureOlogy which was recently sold to L’Oréal. He also pointed out other sizable deals in beauty, ranging from Procter & Gamble’s acquisition of Frédéric Fekkai and The Clorox Co.’s purchase of Burt’s Bees.

Panos noted that beauty firms can sell for six to 10 times EBITDA, depending on growth, scale and other metrics. “I think in each case, whether it’s us or a trade buyer or another private equity fund, we’re highly focused on buying into leadership in profitable channels,” said Panos. “There is a focus at TSG on categories that have the highest margins and then also direct businesses — Internet and QVC — and less of a focus on the department store channel.”

Although deals are making headlines, McPhilliamy pointed out there have actually been fewer than last year. Last year was a record year for deals, with $1.5 trillion of M&A volume in the U.S., said McPhilliamy, adding that in the first quarter, it was down 52 percent from last year.

Still, beauty is attractive, especially because of the cash flow and often because of dynamic founder figureheads.

“It is very tough to hire people like the founders I’ve met in the beauty industry, so they are very backable,” said Panos. “We’re looking for founders who want to continue to grow their business. We can help them recruit and we can bring some resources, take projects for them, but we like to bet on existing teams.”

He added the typical financial sponsor is generally looking to invest in companies that are at least $40 million to $50 million in size.

Of course, any discussion of mergers and acquisitions in today’s market is not complete without mention of the credit woes. “I should say with the current credit crunch you’ll see less debt [financing] available for M&A, and that makes it more challenging for private-equity funds to compete with trade buyers,” noted Panos.

McPhilliamy said she did an audit of deals since the credit crisis hit last July. “And when I went back and looked at the number of M&A deals in the sector since July, there were 11 deals that had gotten done. And, over 80 percent of them were by strategic buyers. So clearly the advantage is with corporate buyers today and I think we’re really seeing strategic buyers take advantage of the dislocation in the financing markets and the fact that more financial buyers would have put a lot of leverage on companies who are really unable to either tap the financing markets or leverage in a material way,” she said.

Prior questioned whether it is a better time for strategic buyers and if price tags have come down with the lack of financing. “I don’t think so,” said Friedman. “The price tags are high because of the high growth in these brands and because of the high margins we’re seeing high multiples in the beauty industry. I don’t see those coming down.”

The emergence of alternative distribution channels has played a role in the buying picture. Panos said the direct access to consumers via the Internet is key in his business. For example, he cited QVC, Sephora and Ulta as retailers where growth outpaces traditional department store companies.

Friedman concurred that alternative channels have changed the landscape. “They bring a profitable revenue channel for the brands and they also allow the brands to tell their brand story in a very controlled way, which is very hard to do in an open-sell environment at retail,” she explained. She added that, surprisingly, direct marketers don’t cannibalize from retail. “In fact we’ve seen from working with a lot of different brands that it actually increases the revenue at retail. After a show [on QVC or HSN], it increases revenues at retailers 40 percent we’ve seen up to about six weeks — so they are definitely synergistic and not cannibalistic.”

Panos noted, “We’re highly focused, as are trade buyers, on other loyalty rates, the overall perception by the consumer and if you have top-selling stockkeeping units at your important retailers. Also, what are international opportunities, is this a brand that can be folded into a P&G or someone else and blown out in their distribution?” He added that his firm creates a snapshot of what the brand will look like in five years and if it is a property they would want to own forever or might be attractive to buyers.

McPhilliamy said there are gutsy moves being made. “This may make the salon professionals in the room cringe, but for like Alberto Culver paying up for Nexxus, which for them turned out to be a very successful deal. They paid two and half times sales but they took [a brand], which was not a market share leader, into mainstream channels. They lost almost all of the salon business, but in the process created a lot of value and took a $30 million brand to $100 million in sales.”

The panelists also spoke about red flags to watch out for, such as customer concentration. “Some of the agreements with shopping channels have restrictions on going to other channels and that’s clearly a red flag,” explained Panos.

Friedman said one key is to partner with great retailers who will incubate a brand, a fact she knows well from her days at Sephora, one of the best brand incubators. “What we can do is put investors together with brand owners. And they have different skills. The brand owners can articulate their strategic vision, but they cannot articulate their financial vision. So what we do with them is we say, ‘Let’s look at the distribution strategy, let’s look at how big it could possible get by customers, by channel, by door, by products.’ We really get down to a lot of detail and find out what the brand needs from the inventory and what the inventory is looking for in the brand. We try to match up those capabilities so it is a successful transaction,” she said.

What should brand owners look for in a financial investor? “For a top brand, price is one factor and certainly [you] should demand price,” Panos said. “You also want to look for a lot from partners, and get the right chemistry — do you share the same values as your investor?”

Prior queried the panel on how long private equity firms hold on to investments. “I’d say on average it’s probably about three years, but I think those exit horizons are definitely shortening over time,” said McPhilliamy. “And I think there have become more options for monetizing those investments. Whether it’s back when the financing markets were much stronger, doing dividend recaps and taking dividends out as a way to maximize our investments to tapping the IPO market for a number of companies. That’s been a route for Physicians Formula and Bare Escentuals — for the owners to get some liquidity.”

The beauty market has been limited by size, not demand, to go public. “There’s an incredible amount of demand. The challenge has been just size. To access the public market you want to be $250 million market cap roughly, so you need at least $10 million in forward net income,” McPhilliamy said.

Prior concluded by asking for attractive growth categories. McPhilliamy singled out personal care, cosmeceuticals and hair care. Friedman mentioned natural products as a key opportunity, as well as the skin and hair care categories. “There’s something special abut those two in that you can create a lifestyle brand around them,” she added. Panos said he’s attracted by brands with an element of protection around the customers’ base, and the ability of the Internet to build a customer base and direct relationships.