Paris Beauty: Fresh Mouth … Topographic Hair … They Get Paid for This? … 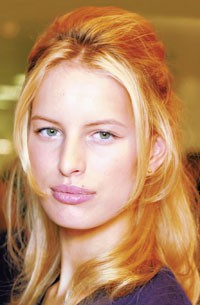 They Get Paid for This?: The lack of obvious makeup at Stella McCartney, Chloé and even John Galliano led one to wonder whether the makeup artists chose to take the week off. Of course not! It takes time, effort and talent to made a nude face beautiful.

They Get Paid for That?: Hair was “natural and fresh” (translation: worn down, finger-combed, with an occasional random clip or twist) just about everywhere, including Chanel, Chloé, some of Dior and all of Louis Vuitton. But undone looks aren’t as easy to create as they seem (see previous item).

Up Swing: When hair was up, it was modern, gorgeous, original — in particular, thick braids at Costume National, Grace Kelly twists at Rochas, flower-like buns at YSL and sophisticated ponies at Valentino.

Silliest Accessory of the Week: Eugene Souleiman’s headbands made from balloons slipped into bright-colored Fogal stockings made the girls look more like they were attending a five-year-old’s birthday party than walking in a Celine fashion show.

The Cleverest: James Kaliardos’ use of thread as eyeliner at Rochas and Luigi Morenu’s ribbons of hair at Viktor & Rolf.

Most Beautiful: McGrath’s shimmery bronze eyes and Orlando’s sophisticated ponytails, both at Valentino.

“In” (Again): Sales should soar in the foundation, clear lip gloss, ponytail elastics and brown and beige makeup categories.