Sephora has seen success with influencer brands, according to Alison Hahn, the retailer's senior vice president of merchandising.

Patrick Ta’s beauty brand is moving into Sephora a day after its official launch.

In March, Ta, a celebrity makeup artist with 1.3 million Instagram followers, teased his brand on Instagram with a separate page that has since accumulated nearly 65,000 followers. On Thursday, Patrick Ta Beauty made its online debut with a four-product range that includes body oils, lip glosses, highlighting mists and a setting fan to be used in tandem with the highlighting mist or for contouring purposes. The offerings, priced from $22 to $52, launched on Ta’s web site and today, they enter Sephora.

“As a makeup artist, I’ve always shopped at Sephora,” Ta said in a meeting at WWD’s offices, to which he brought his own lighting for optimal demonstration of his products. “I used to work at MAC [as a freelance makeup artist], but when I started branching out and adding other brands to my kit, Sephora would be the place to go. They have a wide variety of every single brand from mid to high, so it’s good to go in there and color swatch and add to your kit.”

Patrick Ta Beauty is available now on Sephora’s web site and will be available in select stores. Using Instagram analytics, Ta and Sephora determined where his following is strongest — Los Angeles, New York City, Texas and Miami — so they could bring the brand to the corresponding store locations. The two also came up with an “iconic” gondola — “when you walk by it, you cannot not stop,” Ta said — to match his brand’s aesthetic.

Influencer brands are proving successful in driving both online and foot traffic to beauty retailers. Last month, WWD reported that part of the $6.7 billion in sales that Ulta drove in 2018 came from the launch of digitally native brands such as Kylie Cosmetics and Morphe. Sephora is also seeing success with influencer brands, according to Alison Hahn, senior vice president of merchandising.

“Influencer brands are relatively new, and we’re pleased with the results from a sales and traffic perspective,” Hahn said. “In the makeup world, the more transparency and more authentic voice and the more you understand your client, the more successful you’ll be.”

Ta, 28, began his makeup artistry career in Arizona, where he’s from. A high school dropout, Ta earned his GED degree and, with the help of his immigrant parents, opened a makeup salon. The salon did well at first, “then it did horrible,” he said. He moved to Los Angeles about six years ago and built a celebrity clientele through Instagram. He now regularly paints the faces of Shay Mitchell, Adriana Lima, Gigi Hadid, Bella Hadid, Ariana Grande and Katy Perry. 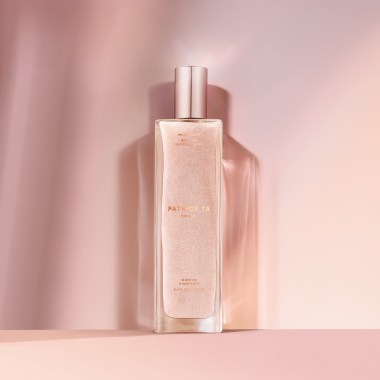 Patrick Ta Beauty, which has been in the works for two years, is inspired by the women in Ta’s life that encouraged him both to come out as a gay man and pursue a career in makeup artistry. Products are named after phrases Ta and his clients utter to each other. The Major Glow Lip Shine, for example, comes in three shades: She’s an Influencer, She’s Expensive and Is She Younger Than Me?

“A joke clients and I [have] is if a song from the Eighties or Seventies comes on while we’re glamming, we’ll say, ‘I’ve never heard that song before, I’m just so young,’” Ta said.

“I’m known for super luminous, glowy skin, so I wanted my first collection to resemble that,” he continued. “Women like my mom, my sister, my best girl friends are the ones who allowed me to be me. It was my goal to create products to empower women to feel confident and beautiful in their own skin.”

Through Poosh, Kourtney Kardashian Aims to Reach ‘the Modern Woman’