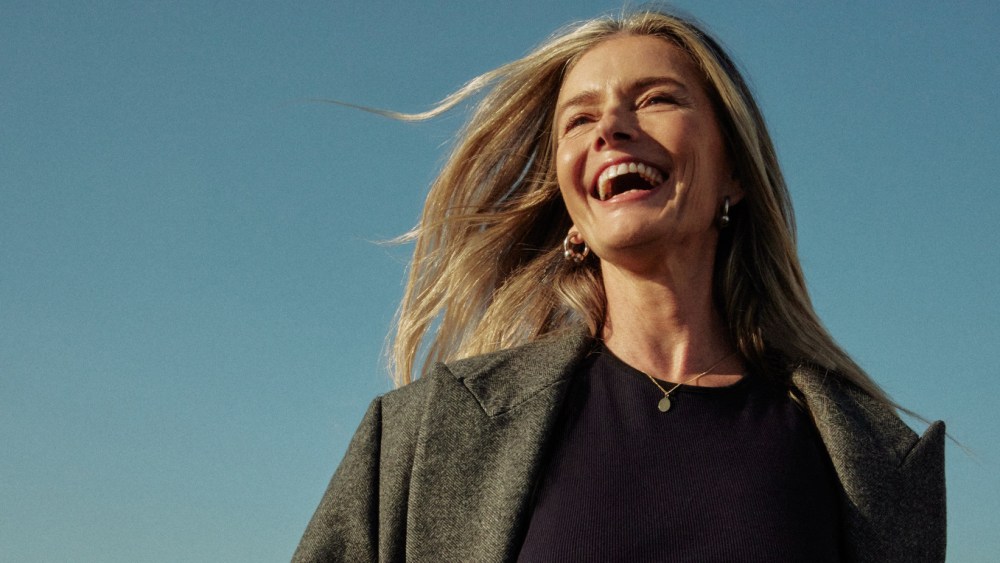 The three-month deadline Maria Shriver gave supermodel Paulina Porizkova to pen her new book “No Filter: The Good, the Bad and the Beautiful,” a collection of personal essays to be released next month, came at a perfect time.

Porizkova had just landed back in New York City from Panama, where she had been sleeping on jungle floors in the rain and pushing herself though numerous trying physical challenges for the CBS reality TV show “Beyond the Edge,” resulting in her barely being able to walk by the time she arrived home.

“When I returned from this I couldn’t walk. I had lost like five pounds. I didn’t need to lose weight. And they said, ‘OK, we want the book. Can you have it done by March 1?’ I was like, well I can’t walk and I can’t do anything else, so maybe I’ll just sit down and write the book. And that’s exactly what happened,” the 57-year-old says on a recent afternoon, perched at the corner of a large industrial table at a photo studio in the Greenpoint section of Brooklyn, New York.

Shriver, a journalist, producer and author who has her own imprint, The Open Field, at book publisher Penguin Life, did not know Porizkova personally. But she reached out to her after following her on Instagram to find out if she would be interested in writing a collection of essays based off of her starkly honest posts on aging, coping with loss and identity made over the past couple of years.

Porizkova was, mainly because it wasn’t the typical memoir pitch she had been receiving over and over again by those interested in her childhood, modeling career and marriage.

After all, she has been in the public eye since the age of three when her parents — who had fled Communist Czechoslovakia for Sweden but had left Porizkova behind with her grandmother — battled to get their child out of the country, too, gaining much media attention at the time, especially in Sweden.

She began modeling in her early teens, first in Paris before making the move to the U.S., where she landed a Sports Illustrated swimsuit issue cover and a then-record-breaking $6 million contract as the face of Estée Lauder.

“I did get, like, 20 calls from agents going ‘memoir, memoir’ and I was like, ‘No, that’s not going to happen,’” she continues. “So when Maria said that, I actually got inspired because it’s what I write about every day anyway on Instagram — my thoughts and processes and my emotions and all of that and then I get to write a little bit more in-depth.”

It’s easy to see why Shriver and hundreds of thousands of social media users have connected with Porizkova on the app. Dressed in what she describes as a comfortable photo shoot-friendly model uniform of jeans, a white T-shirt with robot motifs she picked up in Venice Beach, California, and pale blue flat sandals and just having taken off her makeup to reveal her natural beauty and piercing blue eyes, Porizkova is warm and friendly and comes across as down to earth, arriving at the studio earlier without the typical celebrity entourage. No question is off the table, proving that her open book mentality isn’t just for Instagram.

By her own admission, she was late discovering the app, instead preferring Twitter and Facebook, and didn’t quite understand the concept of posting pictures of yourself despite having had a successful modelling career. But that all changed in 2020.

“I have enough pictures of myself. I don’t need anymore,” she says.

“But when my husband died and COVID-19 happened, I was so f–king lonely and sad and devastated and there was nobody but me. So literally that was me sort of reaching out,” she continues. “It was literally me being stranded on an island tossing bottles with little ‘help’ messages in them and the remarkable thing was that there were so many people suffering at the same time and people that were dealing with grief and people that were dying on them and so my open grief resonated because so many people were going through it.”

After meeting him at 19, Porizkova was married to Ric Ocasek, frontman of rock band Cars, for close to three decades, sharing two sons. They had been separated for two years and going through a divorce but still living together at the time of his death at age 75 in 2019 when he was recovering from surgery. It was Porizkova who found him at the Gramercy town house they shared. The next day, she discovered she had been cut out of his will. In 2021, she settled with his estate for an undisclosed amount.

“I didn’t know if I was going to reach one person or three and what happened was completely beyond my wildest imagination actually,” she says of her venture onto the Meta-owned social media app.

“Before my husband died our marriage had disintegrated and we were already separated for two years and we were going through a divorce and the invisibility to my husband coincided with my invisibility to the rest of the world,” she continues. “I was suddenly a divorced woman who had no career, had no way of making money and also was completely ignored by the population at large and I thought that’s not cool because I’m actually a lot cooler now than I was 20 years ago. I am way smarter. I have more patience. I’m more intellectually curious. I’m more generous. Everything about me is better. But I have wrinkles and that does not make me ugly. I just thought that’s unfair.”

After speaking to girlfriends of a similar age, she began to realize she was not the only one who felt invisible. “Few liked it. Few people were like, ‘great, I don’t have to dress up anymore. I don’t have to make an effort. F–k it. I’m over it.’ They were also generally happily married people with careers,” she says. “I think it’s a little easier to say, you know, but for the rest of us, for women who’ve gone through the gray divorce, which is now getting more and more prevalent, and then are out in the world maybe you did spend your time taking care of your kids and your family and now you’re reclaiming yourself and nobody wants you. Not fair and not cool.”

Her posts helped her connect not just with her girlfriends but strangers too, amassing a following on Instagram fast approaching 1 million, with some now beginning to approach her on the street to thank her for her openness.

But with those who are inspired by her also came the online haters, who have criticized her for sharing bikini and lingerie pictures, as well as some artfully taken nude photos.

“Most of the people I know in the public eye, they will just disregard it. They will just block it. They will have someone else clean their feeds for them. It actually stimulates my brain,” says Porizkova of how she deals with trolls, choosing not to block them — apart from one, who kept “littering” her feed with paragraph after paragraph.

“If I was sitting with this person in a room and she said this to me, how would I reply? I mean, I wouldn’t just walk out the door. It’s not even reason with them, but I would try to figure out where it’s coming from,” she says. “Why are you saying that? What makes it OK for you to say that? What makes you think that’s OK? And why do you think this? That spurs me on to then write posts about other things.”

As part of being fairly open about her life on the internet, she shares some of the treatments she tries. While she stays away from injectables, she joked that she is plonking down her money on any noninvasive treatment she can find, from oxygen facials to laser facials to face yoga and everything in between.

She believes injectables are a personal preference and while some people look “wonderful” with them, she finds that it also reduces their ability to physically express themselves.

“I really like the fact that I can have a conversation with you and I can react to what you say and you’ll know exactly what I think,” she explains. “I don’t have to use an entire paragraph of words because you can be like, ‘oh you didn’t like that.’ It’s clearly visible on my face and I feel like isn’t that what are faces are for? To communicate? The communication thing to me is more important than looking beautiful at this point so I don’t want to take that away.”

On whether celebrities are perpetuating unfair beauty standards by not admitting to when they get cosmetic work done, it half annoys Porizkova because she thinks it’s setting unrealistic standards for the rest of us. But the other half of her “absolutely” understands it.

“If you say that you’ve had something done, guess what’s your calling card? It’s like Jane Fonda notoriously admitted to her face lift and she goes on an interview for a movie and the first thing they’re asking her about is her face lift. Then they make such a big deal out of it that….I get it both ways and I can only do what is right for me.”

Porizkova is not the only celebrity looking to change the conversation around aging. Model and actress Brooke Shields has launched wellness platform Beginning Is Now as an ode to aging out loud, promoting the idea of opportunity and positivity among women ages 40 and up, who are often met with the very opposite messaging. Then there’s actress Naomi Watts, who recently launched her menopausal beauty brand Stripes in partnership with biotech company Amyris, hoping to end the shame and secrecy surrounding menopause and instead mark “the beginning of something new and wonderful for women.”

A brand is unlikely to be in Porizkova’s future though. “The thing is those women were smarter than I am. They jumped on it while the iron was hot and, honestly, I’m a writer. I’m not a businesswoman. What I really do enjoy is writing and connecting and communicating and I’m not really sure how to monetize that. I think if I was to write a tell-all memoir I would make some money but since I’m not doing that, no.”

As for the younger generation of models, Porizkova says she shouldn’t dish out any advice because it’s such a different business. But after a brief pause, she states that, “if you’re making money, make sure you put it away, make sure it’s in your own bank account and don’t give it to anybody else.”