When the lights went dark at Swifty’s in 2016, it felt like a blow to the stomach of New York society. So, it came with great relief that co-owner Robert Caravaggi resurrected the restaurant as a seasonal pop-up in the Colony hotel. His former partner and Swifty’s chef Stephen Attoe didn’t make the move, but many key attributes did — including the tony clientele and the original menu (plus Florida stone crabs, natch.) “I see a lot of familiar faces. They’re table hopping and hosting private dinners just like in New York,” said Caravaggi, who whipped out his phone to share a picture of Harry Benson during the Scottish photographer’s Beatles exhibition at Swifty’s in New York and then one of him taken here recently. Though Caravaggi’s family has owned an apartment on the island for decades, he prefers to stay at the hotel to run a tight ship. “How we perform as a restaurant is my number one priority. The food’s got to be good,” he says, classifying jumbo lump crab cakes and steak au poivre as upscale comfort food. “People say it’s better than ever.”

The town of Palm Beach was incorporated in 1911, but the Preservation Foundation of Palm Beach didn’t come along to protect architectural treasures until 1980. The exhibit “Schultze and Weaver: Architects of the Resort,” on view through April 9, shines the spotlight on some lesser-known figures on the island, Leonard Schultze and S. Fullerton Weaver. The duo were behind 13 other Jazz-Age grand hotels, but the exhibit focuses on the Breakers’ third and current iteration that dates to 1926 and includes large-scale architectural drawings and watercolors from the Wolfsonian-Florida International University in Miami Beach. “The heavy level of detail makes them individual artworks unto themselves,” says executive director Amanda Skier. The Foundation is celebrating its 40th  anniversary with special events all season long, including the $2.7 million makeover of Bradley Park.

No time to leave The Breakers during PCPC? Not to worry. Adam D. Tihany, the designer who created the hotel’s bar, HMF, has been hard at work again. His most recent project includes the renovation of 25 poolside bungalows and a new lobby décor, with a gargantuan, handmade rug, whose intricate garden pattern with 70 colors literally stops people in their tracks. Tihany’s design was inspired by the hotel’s signature floral arrangements in the lobby, and took 35 weavers to create. Tihany also worked his magic on the interiors of Henry’s Palm Beach, which opened in late winter. The bistro is part of Via Flagler, the Breakers’ newly constructed, mixed-used center on Royal Poinciana Way. Pale green panels and purple and yellow seating divert from the traditional pub palette and are instantly welcoming. “The bar’s intended for dining like a four-sided communal table,” said Tihany, of the casual, neighborhood spot. “It’s about dropping in for a hamburger or nice piece of fish several times a week.” 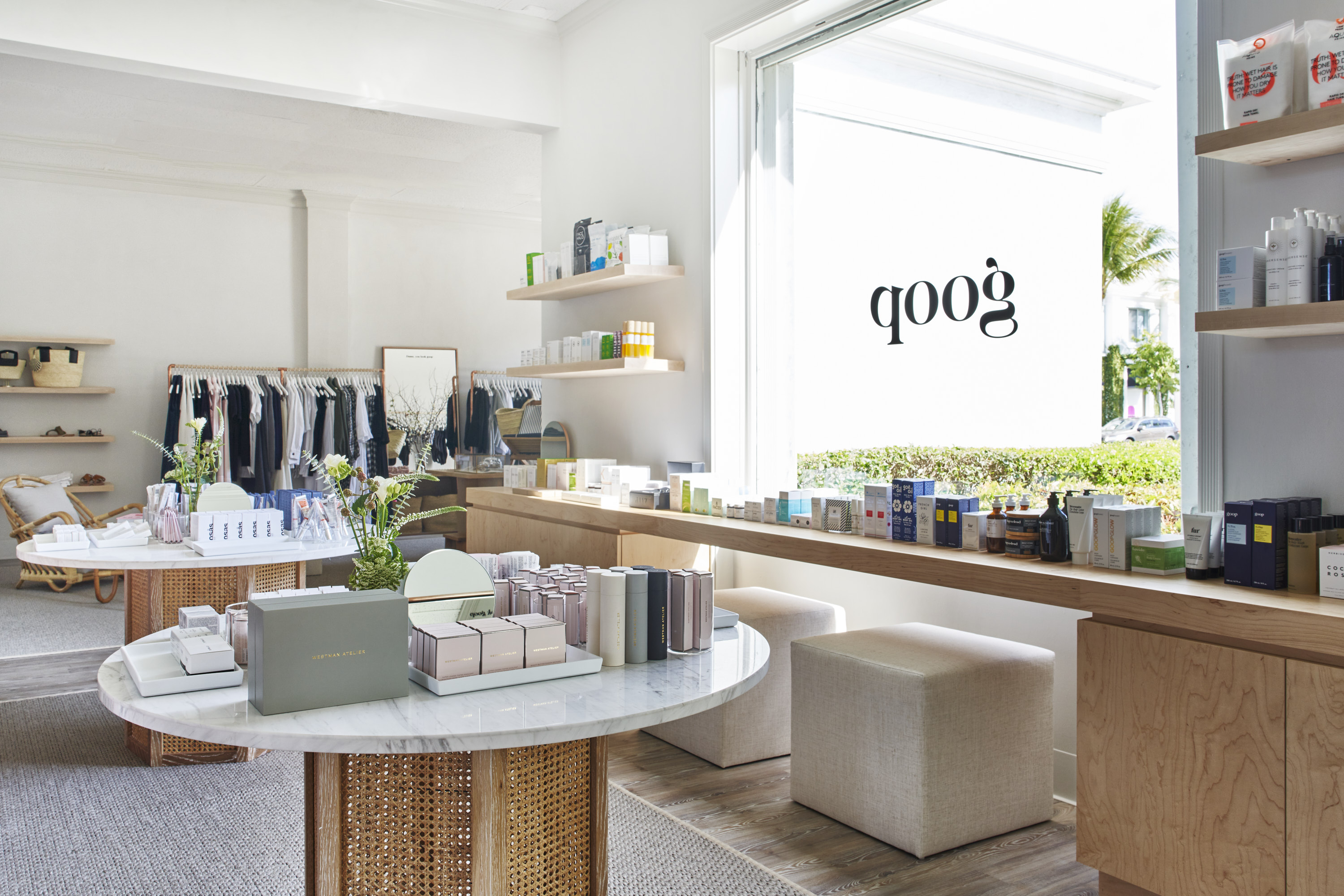 Perhaps due to the demands of her new Netflix gig, Gwyneth Paltrow has no plans to visit her Palm Beach pop up, Goop Mrkt, open through April 12. But she’s making it up to fans with exclusive merchandise and a slew of classes and workshops. “It’s the first time we built out a separate space dedicated to workouts and programming,” said Melanie Ramer, vice president of retail, regarding Goop Mrkt’s spacious, two-room annex behind the Royal Poinciana Plaza. “Community is a big priority for us.” Tracy Anderson Method instructors were in the house earlier this year, and local model-turned-fitness entrepreneur Jacquelyn Quesada is in residence with her body-sculpting classes through March 6. There’s also a lounge and shop, with Florida-friendly edits of G. Label and G. Sport, as well as beach necessities (Carolina Bucci’s Caro bracelets, Haight’s Beca bikinis, roll-up backgammon). A smattering of beauty products from Dr. Barbara Sturm, Vintner’s Daughter and local favorite Tammy Fender round out the offering.