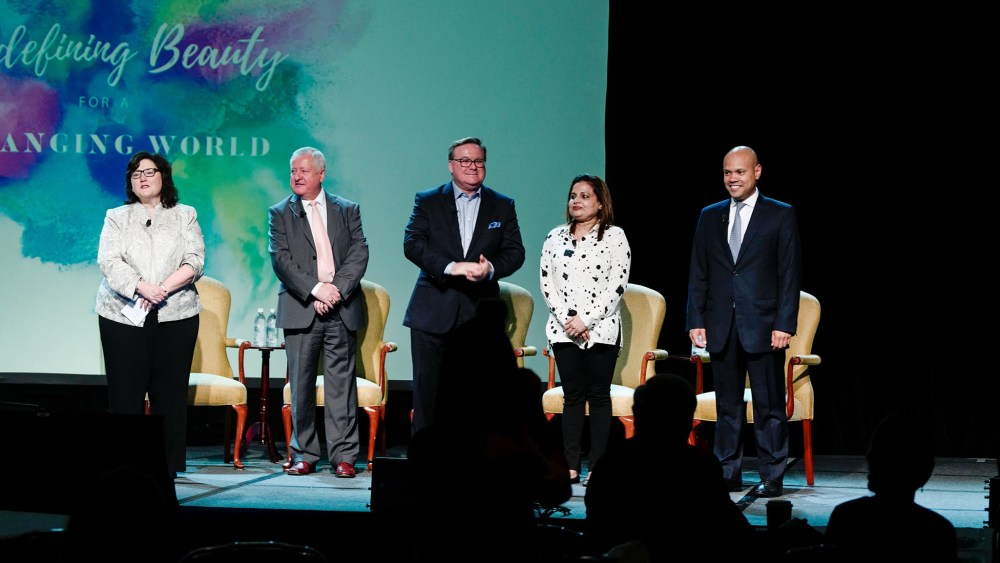 PALM BEACH, Fla. — Shedding the often defensive and reactive posture of years past, Thia Breen sounded a call to action and a “doubling down” of resolve at the Personal Care Products Council’s recent annual meeting here.

“Together we can redefine beauty in this changing world so that we can shape the future instead of letting our industry be shaped,” said Breen, who began her third year as chairwoman of PCPC with a sweeping and rousing speech as the meeting opened on Feb. 27 at The Breakers. The meeting, which ran for three days, drew 375 industry executives, slightly below last year’s turnout of about 400.

“To do this, we must define our own narrative and continue to lead conversations with our stakeholders speaking together with one clear voice.”

She called for a continued outreach to consumers and policymakers through platforms, such as Cosmeticinfo.org and other social and traditional media.

“Not only can we help combat misinformation, but we can turn these personalized relationships into powerful alliances,” said Breen, who is group president for North America at the Estée Lauder Cos. Inc.

“It’s people who influence people and every time we earn a consumer’s trust, every time we show we care, we earn a chance for them to share that good impression. That same philosophy of proactive engagement applies to the political and regulatory environment.”

She continued, “To maintain both a trust on which our industry depends, we need to be an industry where the more people know, the more they admire our work. That’s why redefining beauty means doubling down on the best of what we do. From protecting the environment to advancing workplace equality to driving innovation to supporting scientific research and empowering consumers to show their best possible face to the world, it means finding new ways to engage with consumers, transparent and authentically, it means working closer with sister organizations globally to align our objectives.”

Her references to social media outreach touched on the annual meeting’s program focusing on attitudes of Millennials in the digital age and the gathering on the third day of representatives of 15 foreign cosmetics industry trade organizations from around the world. For the last few years, PCPC has worked to strengthen global relationships in hopes of harmonizing trade regulations between countries.

A wrench was thrown into that drive recently when the incoming administration of President Trump scrapped the Trans-Pacific Partnership agreement, nullifying the headway that PCPC had made with the formation of a cosmetics annex.

During a welcoming reception, Chris Flower, director general of the Cosmetic, Toiletry and Perfumery Association in the U.K., was chatting about the Brexit vote to leave the E.U. “What I hope we can do is engineer a situation where officials in the U.K. can be recognized as competent,” he said. Conversely, Flower said he hopes the officials in the E.U. are viewed the same way. Then business can proceed, he noted. “If this goes wrong, it is the everyday people who will suffer.”

On Wednesday, during the international panel discussion, Flower expanded on the point, speculating that Brexit’s impact on the beauty industry will depend on whether the U.K. government adopts a regulatory framework that is in sync with the European Union, allowing authorities on both sides to exchange information and conduct oversight.

In addition to the loss of U.S. participation in the TPP pact in Asia, there was also concern about Trump’s intention to renegotiate the NAFTA trade pact with Mexico and Canada.

Darren Praznik, president and chief executive officer of the Canadian Cosmetic, Toiletry and Fragrance Association, asserted that there are opportunities to be had in integrating North American operations to drive competitiveness. He pledged to work closely with officials on PCPC and the Mexican association to seek ways to align regulatory requirements, eliminating duplicate testing and inspections, and promote trade and investment.

But there were also bright spots in the discussion, which was moderated by Francine Lamoriello, executive vice president of global strategies at PCPC. Malathi Narayanan, secretary general of the Indian Beauty and Hygiene Association, stated that India’s cosmetics market has grown 7 percent in the last year and is now valued at $7 billion. She credited much of the growth to Prime Minister Narendra Modi’s policies of being open to trade and investment and encouraging Indian industries to upgrade. The Indian government also intends to update its cosmetics regulations with those of other governments. The Indian association is working with PCPC and Cosmetics Europe to identify best practices.

Trump may have chosen an inward path with his America First mandate, but other countries seem to be inclined to promote solidarity with each other.

An example is in South America, where somewhat of a convergence is taking place on business and trade in the cosmetics industry, despite political difficulties in some countries, according to Juan Carlos Castro, executive director of Andi.   Efforts at what Castro called “a pragmatic integration process” have been in motion between Chile, Colombia, Mexico and Peru under the Pacific Alliance. He noted that the four countries have set an aggressive agenda that includes free movement of goods, services, resources and people.

Back home the mood is relatively volatile. One major player, a manufacturer of luxury beauty products, spoke not for attribution in admitting that their department store business is flat. “It’s extremely challenging,” the manufacturer said. “Store traffic is very difficult.”

Jerry Vittoria, president of fragrance at Firmenich, sees the situation differently. “It is a year of change,” he said “and all changes bring opportunity.

“Just when you think you know it all, everything changes again.”