P&G Hits the Streets of New York With Consumer Event 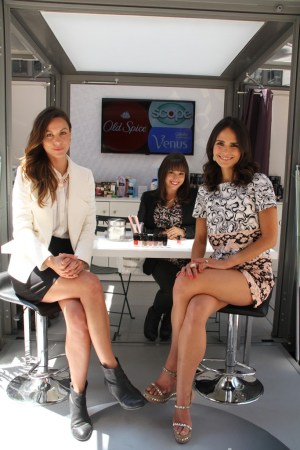 More than 40,000 product samples representing 25 P&G brands like CoverGirl, Vidal Sassoon and Scope were distributed, and seven P&G celebrity ambassadors made appearances at various locations throughout the day.

The event kicked off at 9:45 a.m. in Herald Square with celebrity ambassadors Vanessa Lachey and Hakeem Nicks of the New York Giants.

“I’m just [pleased] to be a part of this because it’s their biggest consumer experience in their 175-year history,” said Brewster. “The fact that they’re using New York to showcase all their products in a way that the products make an impact on people’s lives every day is fun.”

The Brazilian actress, who is currently working on a movie in New Orleans with Patrick Wilson and Katherine Heigl, said while in New York for the event she was able to spend time with her husband, Andrew Form, who is currently shooting “Teenage Mutant Ninja Turtles.”

Brewster also shared her essential beauty move. “I take off my makeup every night; that’s really important,” she said, adding that she would love to be the face of a beauty brand in the future. “I’ve been really devout about that.”

Additional activities included a Man Cave event hosted by Gillette in Washington Square Park where Nick Mangold of the New York Jets and actor Laz Alonso made appearances. Later, a Loving Home event hosted by Iams was held at the 72nd Street Dog Run, where Dancing with the Stars’ Val Chmerkovskiy and his English bulldog, Sir Sleep, greeted consumers and their dogs.

According to the company, the activities were meant to complement an ongoing initiative, called the Everyday Effect campaign, designed to showcase the versatility of P&G products.

The day’s events were promoted live via broadcasts through P&G’s social media channels and its “Everyday Effect Live From New York” Twitter campaign. Pedicabs covered in P&G’s blue logo were on hand to take participants from event to event.