Photographer Hannah Khymych tapped into the power of team to reinvent the creative process during quarantine—using herself as muse. 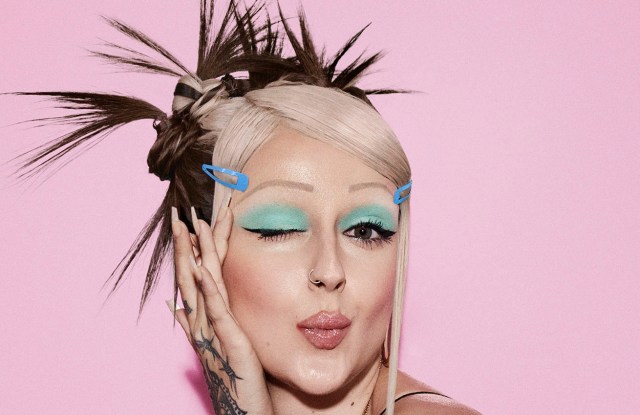 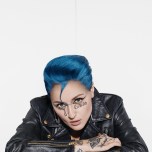 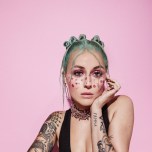 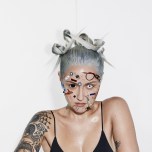 As a photographer, Hannah Khymych has photographed Lady Gaga for her Haus Laboratories campaign and Gwyneth Paltrow for Bloomingdale’s, among others. But when the pandemic hit, so, too, did the ability to shoot live subjects.

Khymych—an intensely creative 28-year-old New Yorker who studied art at New York’s Fiorello H. LaGuardia High School—was not deterred. With a lack of subjects to shoot, she decided to make herself the model.

While quarantining at her sister’s house in New Jersey, where she brought her sizable stash of makeup, she tapped into her network of hair stylists and makeup artists for a project that started with a desire to do what she loves most and turned into something much more. “I was going crazy, so I got one of my makeup artist friends on a call and they taught me how to do a look so that I could shoot it on myself,” Khymych says. “It took two to three hours.” Thus, the photographer’s self-portrait series was born.

Khymych has since returned to her Brooklyn apartment, where she has continued shooting. In terms of how she works in quarantine, the process isn’t that far off from a normal day on set, except “set” is often the makeshift studio in her living room, and meetings with the teams take place over Zoom.

While subbing in for photo assistants, a model, a makeup artist, and the like gives Khymych a lot of creative freedom, it’s a daunting amount of work. “You’re learning about all the things that makeup artists or hair stylists are doing on set, or how the model is getting her hair and makeup changed constantly. It’s exhausting and you’re seeing it from a different perspective,” she says. “Putting myself in a model’s shoes, it’s much harder than people perceive it to be. I completely understand why girls get exhausted by the end of the day.

“I’ve never done projects about me, so this is the first time I’m stepping out of my comfort zone. I would prefer to be on the other side of the camera, it’s much easier to direct the lighting and the model,” Khymych continues. “But, I already know what’s happening behind the camera. Why not experiment with being in front of it and see what I can come up with?”

Khymych characterizes her photographic style as melancholy and pensive, and says she heavily draws upon the work of Helmut Newton, whom she calls her biggest inspiration. “It’s a little dark and moody, I don’t really gravitate towards color,” she says. “I like to tell a story within my images, and I like my images to stand alone. Because I shoot so much beauty, and I love makeup and seeing how far we can push it, it always turns a little gothic.”

For the story here, Khymych collaborated with makeup artist Laramie Glenn and hair stylist Evanie Frausto to fashion four distinct looks. “Laramie and I created this concept together of creating real-face instagram filters,” Khymych said. “We reference the film Crybaby, and the Nineties overall, when I was born. I thought it would be fun to recreate a thin brow.”

The past wasn’t the only point of reference. “For the technology shots, we referenced where beauty is going,” Khymych says. “Now, digitally, you can create so many things in photoshop and with Instagram filters.”

Khymych’s creativity during the coronavirus crisis has not gone unnoticed by beauty companies. E.l.f. Beauty tapped her to shoot a Halloween campaign with makeup artist Caitlin Wooters providing direction, while MAC Cosmetics commissioned her to do a campaign for a new collection.

“It was very different, but also nice to concentrate exactly on what I needed to get done, and not worry about receiving products or people showing up late,” says Khymych. “I can do my thing and not be bothered.”

That being said, the photographer looks forward to the days when she’s once again able to interact with a larger group. “I miss sitting down with the whole team and talking about what we’re going to do for the day,” she says.

Still, Khymych believes that the culture around shoots will be significantly different in the post-pandemic world, with groups and resources pared back significantly. “If you just keep it simple and know what you want to achieve, you can achieve it without going overboard. Also, a lot of cool digital collaborations are going to come out of this,” she says.

As for whether or not she’ll continue posing for campaigns, Khymych says she’s up for it if clients are interested, having leveraged the pandemic into a new phase of her career. “It took this first step of being very uncomfortable in front of the camera, and it opened up this whole project,” she says. “Stepping outside of my comfort zone put me on the map.”

Rocker: “We gravitated towards the things we were interested in, so we referenced the ‘Crybaby’ movie and the Nineties. I thought it was really fun to re-create a thin brow, do something a bit more fun as far as makeup goes, since I never wear color.”

Flower Freckles: “We wanted to replicate the look of freckles with flowers, just to add something more delicate, more soft and pretty.”

Technology: “Here we referenced where beauty is going, and how digitally, you can create so many things in photoshop and with Instagram filters.”