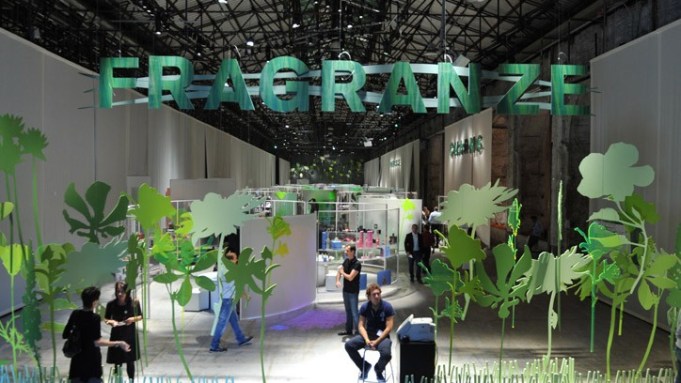 FLORENCE — Exhibitors at Pitti Fragranze, the three-day beauty fair dedicated to niche brands that closed here Sunday, appeared upbeat as the retail mood shifts in its favor. Selective distribution brands are broadening their appeal with increased sales, despite a saturated fragrance market and declining volumes in traditional perfumeries.

Evidence of a reignited retail interest in the niche sector was seen in international buyer attendance figures, which increased 30 percent to 200 compared with 2009. Overall visitor figures at the eighth edition of the fair hit 1,934, a 14 percent increase from the previous edition in 2009.

Selective brands are providing a ray of light in perfumeries, holding their own at the expense of mass brands, according to statistics from Unipro, the Italian association of cosmetics companies and executives.

In what could be the start of a beauty David and Goliath story, mass-market product launches, stock reduction and discounting were unable to stimulate existing flat sales in Italy’s perfumeries in 2009 — which historically held the country’s highest share of beauty consumption. Sales in the challenged channel fell 3.5 percent to 2.2 billion euros, or $2.8 billion, according to Unipro statistics released earlier this year.

“We’re close to achieving our best results since 2007. The crisis in the conventional sector is still present, but our category is growing. C onsumers want an assortment of innovative niche brands,” said Silvio Levi of distribution firm Calè Srl. He explained the continued growth of the Italian pharmacy sales channel is building momentum for the niche sector. In 2009 pharmacies’ total group sales increased a hefty 3.2 percent to hit 1.43 billion euros or around $1.8 billion. “We’re witnessing a growing selective audience, and building up consumers. It’s easier to sell niche brands when there’s an existing perception of diversity,” said Levi.

Celso Fadelli, founder and chief executive officer of Padova, Italy-based fragrance distributor Intertrade Europe, said, “Our sector is growing slowly, but growing. Stores are continuing to suffer because mass-market brands speak more about marketing and testimonials than perfume. I want to put perfume back in the spotlight.”

To this end Fadelli revealed for the first time his plans to open a niche perfumery boutique and gallery space in mid-October, called Avery Gallery and Avery Fine Perfumery, in Modena, Italy. It will be the third concept store from the company after inaugurating a London boutique on Mayfair’s Avery Row, and an Avery shop-in-shop in New York’s Limelight Marketplace in May this year.

The 2,368-square-foot store will showcase not only the company’s portfolio of 25 niche beauty brands but also house a gallery space dedicated to books, exhibitions and presentations. “We want to create an alternative environment, where clients can visit for motives other than to purchase,” said Fadelli. The boutique’s quirky flavor will echo that of its London outpost, said Fadelli. An in-store room dedicated to skin care and makeup will be a new addition. “We are searching for innovative brands, “ said Fadelli of the proposed brand selection.

Elsewhere, scents with a story, luxe-edition candles and fragrances and number motifs proved to the fair’s strongest trends. In the fair’s section dedicated to new brands dubbed Spring, Scent Bar, an Italian label launched in 2009, drew an international crowd for its debut collection of fragrances and candles. Twelve unisex eaux de parfum packaged in matt black bottles and identified by numbers will retail for 120 euros, or $159, for 100-ml., and 69 euros, $90, for 30-ml. “It’s been a very good fair and we’ve met a lot of international distributors,” said founder Viola Pompili.

Nordic fragrance brand Agonist made its Italian debut, with a collection of fragrances in artisanal handcrafted Swedish glass bottles produced by Kosta Boda, Sweden’s most prestigious glassworks. Accounts include Harrods London and Lucky Scent. Limited pieces sell from 414 euros, or around $538. “The Russian market is really big for us and we’re pleased we’ve seen a lot of them here today,” said Christine Gusafason, creative director. Russian buyers Olga Lomovtseva and Yulla Ryzhkova have four stores in Russia, and were visiting Pitti for the first time. “It’s a great place to do business. So far we’ve picked up Lorenzo Villoresi and Montal products, said Lomovtseva.

“Pitti is already a trademark so it attracts an international crowd,” said Sebastian Maria Fischenich, creative director of German brand Humiecki & Graef, who agreed a strong Russian presence, was visible at the fair. Fischenich noted that the Humiecki & Graef line has entered the top 10 selling fragrances in Bloomingdale’s, Dubai, despite only launching there in August. Of future plans he said, “We’re planning to slow down launches, our next release will be in 2011.”

Elsewhere, niche fragrances proved they could compete in the glamour stakes. Profumi del Forte launched a new limited edition version of its existing eau de parfum Versilia Aurum, which is packaged in a 24-carat gold-plated bottle topped by a marble cap. A 100-ml. bottle will retail for 480 euros, or $623.

The Amouage fragrance house, founded in 1982 by Sayyid Hamad bin Hamoud Al-Busaid, a member of the Omani royal family, previewed Memoir, the house’s new eau de parfum by Christopher Chong, in advance of its official launch in Oman. The women’s scent includes top notes of mandarin, cardamom, absinthe and pink pepper, with a sultry heart and base notes such as styrax, fenugreek and musk. Packaged in a black glass bottle embellished with Swarovski Elements, a 100-ml. flacon will retail for 370 euros, or $481. A men’s 100-ml. cologne version will retail for 267 euros, or $347.

Perhaps mindful of promoting too much indulgence, Prato, Italy-based Beauty San SpA previewed its forthcoming holiday initiative from Costume National, a gift collection dubbed Save the Amazon — eight gift sets themed around its portfolio of four fragrances 21, Gloss, Intense and Homme. Slated to hit shelves in November, 5 percent of sales will be donated to the Amazon Association charity. Prices start at 55 euros, or $71 for a 50-ml.gift set.

A new flanker men’s body line was also unveiled by Costume National and consists of hair and body wash, an energizing spray deodorant and energizing aftershave balm. Prices start at 24 euros, or $31. Andrea Valdo, export manager at Beauty San, said the brand, which is sold in 40 countries and 300 doors in Italy, is gearing up to launch a new women’s fragrance in 2011.