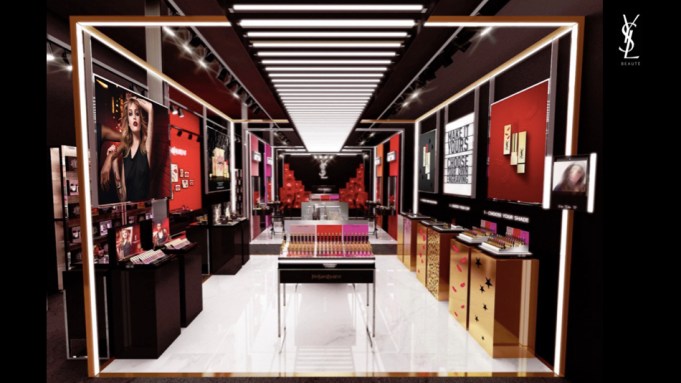 NEW YORK — This is the year of the pop-up for L’Oréal Luxe.

Following a string of four successful U.S. pop-up experiences for YSL Beauty, Emporio Armani Fragrances, Viktor & Rolf and Maison Margiela, the beauty giant is upping the ante on the initiative for the tail end of the year. Second pop-ups for both YSL Beauty and Giorgio Armani are gearing up to open their doors here, just in time for the holidays.

While the first series of shopping experiences was open only for brief periods — Viktor & Rolf was the most fleeting at four hours and Emporio Armani the lengthiest at 10 days — YSL Beauty and Giorgio Armani are far more ambitious. The former bows on Oct. 27 and the latter the first week of November, and both will remain open through the end of the year.

Not surprisingly, the shops have secured prime real estate in SoHo, said Alex Choueiri, president, international designer collections, L’Oréal Luxe, during an interview at L’Oréal’s U.S. headquarters here last week. They are located on tourist-heavy Broadway, smack in the middle of Spring and Broome Streets and next door to Bloomingdale’s.

Yves Saint Laurent Beauty SoHo, the first of the two to open, is an evolution of the two-day pop-up that kicked off the strategy in January. At the time, the lipstick shop had engravers on hand to customize lipstick cases, and in one afternoon managed to sell $13,000 in product. The event gained a lot of traction on social media as well, and by all accounts was considered a “very big success,” according to Verane de Marffy, vice president of marketing, YSL Beauty.

Taking the above and iterating on it, de Marffy said customization — with a dedicated #MakeItYours hashtag — became the overarching theme of the soon to open boutique, which will be divided into three distinct areas. The first part, a Lip Showroom, allows customers to choose a lipstick cap and have it engraved (the service costs $3 on top of the $37 lipstick), as well as a make-your-own gifts section to create a “wardrobe of lip color” with shades of one’s choosing. The next section is dedicated to fragrance and encourages shoppers to select a bow for their scent and then have the bottle engraved, with no additional charge for either service. The last section is intended to help “create a constant stream of sharable moments” and contains a lip-shaped couch and Swarovski-encrusted guitars that are begging to be posted on Instagram.

There is a full calendar of events over the two months, from DJ Thursdays — a roster of DJs is still being finalized — to Makeup Mondays with makeup artist guests that include Nina Parks and Gina Brooke. There are also two influencer events, the first hosted by beauty blogger BFFs Manny MUA, real name Manuel Gutierrez, and Laura Lee and the second by Karen Gonzalez, who goes by @iluvsarahii on Instagram.

It’s no wonder that lips are again the concept for YSL’s second off-line footprint of this nature in the U.S. YSL Beauty’s lip category is up 17 percent year-over-year — and “without any newness, which is rare,” de Marffy pointed out. She credited the sales lift to buzz generated from the inaugural YSL pop-up in downtown Los Angeles.

It’s also one of the reasons L’Oréal had the confidence to roll out three similar experiences last summer, all with a fragrance tie-in. They were: a three-day pop-up at the Surf Lodge in Montauk, Long Island, centered around “Beach Walk,” the best-selling scent in Margiela’s Replica fragrance collection, in June; a one-day Viktor & Rolf Flowerbomb pop-up at the High Line here in July and an Emporio Armani experience that ran from Aug. 17 to Aug. 27 at the Oculus at the World Trade Center.

The initiative is global, although the biggest push is the U.S. market. Giorgio Armani pop-up experiences recently took place in Hong Kong for the first three weeks of September and at Covent Garden in London in March through May.

Which begs the question: Is all of this retail activity a precursor to L’Oréal staking its claim in the prestige space with monobrand freestanding stores? It sure looks that way, but all Choueiri could say was that pop-ups are part of a direct-to-consumer strategy that has roots in both the physical and digital worlds, including a focus on growing the e-commerce destinations of brands in the L’Oréal Luxe division. He contended that the portfolio’s are “growing very fast online,” a combination of sales from direct channels and retail partners.

“With all of these, whether short- or long-term, it’s definitely a test and learn [situation]. The market is shifting really rapidly and we need to understand what we can do [in retail], whether it’s a pop-up or long-term,” Choueiri said.

He added that it’s “really hard to say” if these off-line retail experiences will lead to freestanding doors or just another series of pop-ups, but the initiative will move forward in some capacity — pending the success of the two latest projects.

“It’s important strategically for the brands.…All of the pop-up initiatives together will be significant,” Choueiri continued, declining to give a combined sales projection for all six efforts for the year. What he did say was that some of the previous pop-ups resulted in sales that could eclipse an entire week’s worth of revenues with a retail partner.

But generating sales is just part of the strategy.

Physical manifestations of these beauty brands are just as much a marketing play, Choueiri insisted. They serve as a way to control the messaging of each brand in a way that’s nearly impossible to achieve with wholesale partners, no matter how elaborate the counter, gondola, back wall, digital tie-ins, etc., might be. Because as every brand knows, if you want total control of the retail experience, there’s only one option: going direct.

It also serves as a way to bring to life a retail experience, or “retail theater.”

Giovanni Valentini, vice president of marketing, Giorgio Armani, cited this summer’s experience at the Oculus as an example. Passersby were invited to enter a giant black cube that, once they were inside, became an infinity room of the New York skyline. Valentini said each day saw about 400 people lining up for one hour, on average, to visit the box, which had an objective of introducing a new fragrance that wasn’t yet in full distribution. This experience was a recruitment program for new customers, first and foremost, Valentini said, but also managed to do nearly $50,000 in fragrance sales.

For the Giorgio Armani Beauty pop-up that opens next month, the Armani Box, the concept is in line with the Hong Kong and London spaces that debuted earlier this year. Similarly, designer Giorgio Armani’s pet gorilla Uri — a gift that came from a movie set — is the emblem of the store.

“You would not expect that from Armani,” said Valentini, showing a rendering of the boutique that has a massive, red, life-size gorilla sculpture taking up the majority of the front window.