Viola should have named his company Every Man Jock, as Anna Dysinger discovers during a workout with the entrepreneur and five-time Ironman competitor. 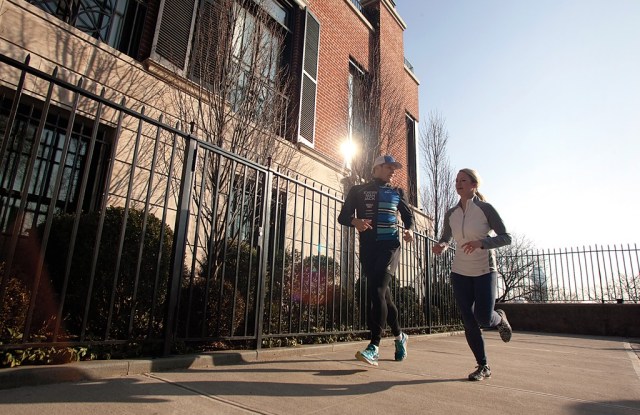 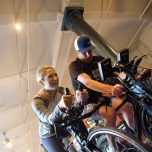 I’m perched on the very uncomfortable seat of a pink racing bike at Tailwind Endurance, pedaling furiously. I feel like my legs are going to fall off, but Ritch Viola, founder of men’s skin-care and grooming line Every Man Jack, is riding with ease. I’m ready to quit, but he admitted that he hates when women beat him so I’m especially motivated to ride on.

Not that I stand a chance. The 42-year-old Tiburon, Calif.–based triathlete bikes for 90 minutes three times a week, swims for 90 minutes twice a week and runs three days a week. All before 7 a.m. Then he drops his two kids, Abby, 11, and Zac, 8, off at the bus stop and heads to work to run his company. No sweat for a guy who’s competed in five Ironman competitions and won his age group in four of them.

Viola started training after his son was born and he realized his wife, Emily—who works in finance at Every Man Jack—wasn’t the only one who had gained baby weight. He signed up for a race with his sister—Ivy Viola, sales manager for the brand—and found that the lifestyle change wasn’t just helping his physique, it also made him a better boss. “I realized that I like getting up in the morning and sweating—it was good for my mind, body and soul,” says Viola. “Running my own business, I feel like I just don’t get stressed. It can be a very stressful thing, but I’m able to approach everything with a much more calm manner because I have good balance in my life.”

Viola started Every Man Jack in 2007 after leaving his position as vice president of marketing for Method. His goal was simple: to create affordable, natural products that guys would want to use. Today, Every Man’s top two retailers are Target and Whole Foods, and the line is also carried at Duane Reade, Walgreens and Fred Meyer. Last year, Viola expanded into women’s skin care when he acquired and revamped Own Beauty. Viola’s next step is to expand Own’s product offering to match the Every Man Jack categories. “But of course we have to do things a little different,” he says. “No woman wants to feel like she is an Everywoman Jill.”

Integrating his hobby with his company was also a no-brainer. In 2011, when he competed in the qualification-only Ironman in Kona, Hawaii (“the Super Bowl of triathlons”), he had a racing kit made that said Every Man Jack. Soon after, he started a team that the brand sponsored. “It came to be because, well, I’m the decision-maker and I like the sport,” laughs Viola. “But from a marketing standpoint, the sport aligns so nicely with our brand. It’s 70 percent men, they care about their bodies, they care about what they put on their bodies. They shop Whole Foods, which is our second biggest customer. It’s spot-on with our target audience.”

While Viola’s success with Every Man Jack lies in capturing the niche, all-natural men’s skin-care market, he has a different, not-so-natural secret weapon on the racetrack. “When you’re at mile 80 and you [pull out] a peanut butter Snickers, you are like, ‘This is freaking heaven.’”