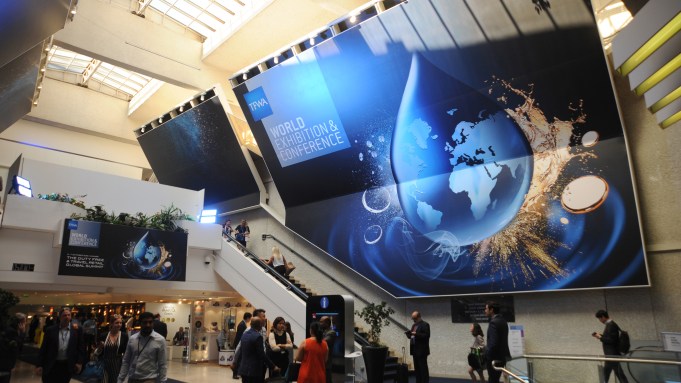 CANNES, France — If there are two staples at the Tax Free World Association’s annual convention here, they are product presentations and parties. Neither was lacking during the most recent session, which ran from Oct. 3 to 7.

Bulgari was showing off its new perfume projects. At the top of the list was one to carve out a novel position in the high-priced men’s fragrance market. “Today that doesn’t exist,” said Valeria Manini, perfume business managing director of Bulgari.

It’s a collection of six fragrances, called Le Gemme, all created by master perfumer Jacques Cavallier-Belletrud, and the concept is aimed at businessmen who often travel. The scents were developed for the travel-retail channel and target in the high end of the price range at 280 euros, or $310 at current exchange, per bottle. Manini pointed out that successful businessmen “travel all the time. There is nothing for them. [Stepping into a travel-retail store] is the only moment when men are shopping.” She added: “I want to show that men matter.”

Like some other Bulgari fragrances, the men’s scents are related to precious stones, such as  sapphire, onyx and red garnet. The packaging has matching coloration. The collection will be launched in segments, with the first three rolling out into 400 doors this season and the second set of three due out in the spring period.

A week before the Cannes convention Bulgari put the men’s fragrances on sale at Harrods in London and at the travel-retail shop in the Dubai airport, and sales hit 50 bottles a day, according to industry sources.

This was part of an overall move by Manini to inject more personalization into the merchandising of Bulgari’s fragrances. Another strategy involves grouping women’s perfumes according to color, personality of ingredient composition and mood. It is seen as a rebalancing from the more practical approach of marketing luxury.

At the Euroitalia stand, there was a lot of buzz about fragrance projects in the works. Following the September launch of the Dylan Blue men’s scent — the company’s most significant introduction with camera work by Bruce Weber and modeling by Gigi Hadid — a women’s companion fragrance will be launched next year. There also will be a women’s scent tied to Versace fashion and a new Missoni fragrance for men. According to Euroitalia’s president Giovanni Sgariboldi, the Missoni eau de toilette sold well, especially in Italy, where its native roots resonated. “It’s a 100 percent Italian project and the results were very good,” he said.

Under the Moschino brand, there will be two new versions of Moschino Fresh, the fragrance that was cheekily packaged in a bottle resembling a container for glass cleaner. “With the arrival of Jeremy Scott as the new creative director, we are working on a creative direction. We are going to launch new products with a new philosophy,” said Sgariboldi.

Partywise, revelers thronged into the cocktail party hosted by Art & Fragrance on Oct. 4 at the voluminous Gare Maritime venue.

“First of all we are confident about continuing to grow, thanks to our diversified businesses and our clear focus on excellence, which is our guiding principle,” said Silvio Denz, chairman of the company. “All of our perfume lines have recorded higher revenues in 2015.”

After running through a series of recent tie-ins for Art & Fragrance, including a Lalique partnership with the Elton John AIDS Foundation, Denz announced the holding company had been renamed “Lalique Group” in June, “since Lalique is the core brand in our group portfolio. Art & Fragrance has become a subholding and will continue its activities in the beauty business like in the past 50 years.”

Roger von der Weid, ceo of Lalique Group and of Art & Fragrance, presented new fragrance projects. These included Bentley Momentum, a men’s scent whose tag line is “Step into the extraordinary.” It is due out in spring.

The idea with Lalique Bentley Black Crystal was to create the most exclusive crystal edition for Bentley motors. Twelve pieces have been produced of the bottle, whose wings are plated in platinum.

On the other end of the spectrum, with a view to making Lalique’s crystal editions more accessible and functional, the company is releasing Lalique Mon Premier Cristal, a trilogy of fragrances accompanied by refills.

After the presentation, Denz — when questioned — told WWD he is interested in acquiring new brands. “We are in negotiations right now,” he revealed, adding no details could be divulged, but that interest lies in existing brands that have synergies with Lalique Group.

“We want a brand that has a name and that we can build,” explained Denz.

An estimated 600 people packed into the ballroom of the Majestic Barrière hotel on the night of Oct. 3 to see the unveiling of Mercedes-Benz Woman, a feminine fragrance intended to help feminize the franchise built by INCC Perfumes. The brand’s original women’s scent accounts for only 20 percent of the car company’s total fragrances sales, with men’s generating the remainder. Since the franchise was founded with the launch of its first men’s scent in 2011, the business has grown to 16 fragrances spread over three brands, making 130 million euros, or $143.8 million, in sales annually, according to industry source estimates.

Thibaud de Vaulchier, vice president of sales at INCC, said he would like to see the new women’s scent represent 20 percent of total revenues within two years. “We are brand-builders,” noted Rémy Deslandes, president of INCC. The fragrance is being made available in varieties including an eau de parfum — priced $90 for a 90-ml. spray — and an eau de toilette costing $75 for a 60-ml. size.

The presentation at the Majestic featured an appearance by the creator of the fragrance, master perfumer Honorine Blanc of Firmenich. She described the formula as an oriental floral, using flowers that she smelled in India. “It is an homage to femininity for Mercedes,” she said.

Mercedes fragrances are distributed in 95 countries, and the new women’s scent is expected to land in the U.S. in fall 2017 in roughly 500 doors, including Macy’s and Dillard’s, Vaulchier said. Among the target customers will be Millennials and Latinas.

In a suite in the same hotel, Molton Brown was showing off two fragrances added to its range of bath and shower gels, lotions and eaux de toilette. The two products are called Exquisite Vanilla & Violet Flower and Cornice Pear & Wild Honey.

“Travel retail is our fastest-growing channel,” said Mark Hermann, global vice president of sales and operations. The company’s calling card in travel retail is a 178-square-foot Molton Brown shop in Terminal 5 of Heathrow airport, which generates more than 1 million pounds, or $1.2 million, per year, he noted.

The London-based company, which is owned by Kao Corp. of Japan, was started in 1973 in a hair salon. It has since built a network of freestanding stores, hotel retailing and locations in department stores. The various businesses spread over 75 countries, including Molton Brown stores in the U.K., United Arab Emirates, South Korea, Japan, Scotland, Northern Ireland and the U.S., which has standalone units on New York’s Madison Avenue and in SoHo.

Hermann said that the company is trying to evolve its range with fragrances as the focus for the future. “Why not take it into eaux de toilette?” he asked.

Ferragamo Parfums was showcasing a number of novelties. There was the recent Uomo scent for men. There will also be a new chapter in the Uomo portfolio starting next summer, according to Luciano Bertinelli, chief executive officer of the company. “We hope it will be a pillar for our men’s line,” he said. “The objective is to have it first in the portfolio, to gain market share in our pie.”

Ferragamo was also showcasing a limited edition of its blockbuster Signorina, whose red lacquer packaging features a silhouette of Florence’s skyline. It is due out for the holidays.

Signorina in Fiore, which is meant to recall a young girl’s romantic side, is set to launch in February.

For its part, Inter Parfums SA was highlighting the Coach fragrance, which was launched a month prior. “We have good results absolutely everywhere, before having started the advertising,” said Philippe Benacin, chairman and ceo of Inter Parfums SA, the label’s perfume licensee.

The company was presenting, as well, a new Rochas fragrance due out in March, plus upcoming women’s scents for Jimmy Choo, Montblanc and S.T. Dupont, and an exclusive collection for Boucheron.

Meanwhile, Gérard Delcour was in town to present a line of fragrances he co-founded, called 100 Bon, which is billed to be 100 percent natural. “We are going to launch it worldwide,” he said, adding that could happen in early 2017. The unisex scents were created with Robertet.